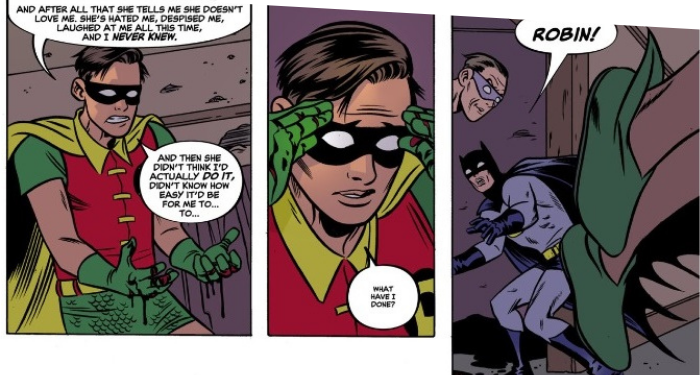 Batman will always hold a special place in my heart as the first superhero I ever loved. The ’60s TV series almost single-handedly turned me into the superhero/comic book nerd I am today. It is famous for its campy humor and distinct visual style, and is still very much loved by fans of all ages.

In fact, it is so loved that it has inspired numerous homages, parodies, and adaptations in the decades since it went off the air. One such story appeared in DC Comics Presents: Teen Titans #1, published in 2011, which featured several stories inspired by the Silver Age of comics. The issue’s main feature is utterly unimpeachable: the Teen Titans have to save President Kennedy, who was kidnapped and replaced by aliens that look kinda like the Beatles, and then things get weird. I won’t spoil it for you, but I will beg you to read it.

Alas, the same cannot be said of the Batman-centric story in this issue, “Batman A-Go-Go!” It’s not officially a Batman ’66 comic: the first issue of that series wouldn’t debut for another two years. But it is written and illustrated by Michael and Laura Allred, who would do some work on Batman ’66, so it’s got that same vibe. Up to a point.

We start out well enough: the Riddler has decided to give up riddles and take up the struggle of the working class (by stealing from rich people). But after Batman and Robin swoop in to save the day, things get odd. Commissioner Gordon criticizes Batman as a useless relic. Robin decides to take custody of Riddler’s moll Sunshine, alleging that the Riddler did some decidedly not-’60s-friendly things to her and that she deserves better than Batman’s plan to “lock her in jail.”

Needlessly to say, Batman immediately has an existential crisis. Despite Alfred’s attempts to dispense comforting wisdom, things get worse. Dick, acting like a petulant teenager, spends more and more time with Sunshine, who says she doesn’t like books or movies because they don’t show the “misery, despair,” and “darkness” of “real life.” (I guess she’s never heard of Victor Hugo.) Batman tries to keep up the good fight, but Gordon is too busy dealing with race riots to appreciate his efforts.

Now at this point, I was on the fence about this story. I wasn’t sure about all the cynicism, but at the same time, I felt there might be value in what it had to say. If anyone can appreciate a little story deconstruction, it’s yours truly.

But then we veer out of social commentary and straight into a horror film. While vacationing with Sunshine, Dick is kidnapped, and his aunt’s severed ear is sent to Wayne Manor in a box. (What happened to the rest of Aunt Harriet, who was chaperoning the trip, does not bear mentioning. By the way, have you seen Fargo?) The Riddler shows up again and reveals to Batman that he never manipulated Sunshine; instead, she blackmailed him into joining her activist troupe. Asserting that Sunshine is a menace to society, the Riddler volunteers to help Batman find her and Dick.

And what has become of our AWOL Boy Wonder? Shield your eyes, citizens.

Robin definitely had a temper in the original show, but literally at no point did I ever think, “Gee, good thing Batman’s here to teach Robin some ethics and prevent him from going on a killing spree!” And if this is a comment on Jason Todd, AKA the stabby Robin, downgrading his motivation from “was horribly murdered” to “was ditched by girlfriend” misses the point by a mile.

So after Robin, um, murders and mutilates his aunt and slaughters a roomful of henchmen, he jumps off a building to his death. Batman tries to save him but fails.

Batman then tells Riddler that he’s going to send Sunshine’s blackmail material on him to the district attorney. It’s implied the blackmail material is evidence of Riddler’s homosexuality, so this is a real jerk move, but maybe that’s the point. When Riddler attacks him, Batman just lets him fall off the building and makes no attempt to save him at all. Horrified by what he’s become, Batman breaks down on the rooftop…

And then it’s revealed that Batman was knocked out during the opening fight scene and dreamed this whole nightmare scenario. The end!

Yeah, if you were waiting for all of this to make sense or build to a profound and satisfying conclusion, you’re in the wrong comic.

Why I Hate It

On one level, I get it. The ’60s series is silly and campy and presents an oversimplified, rose-tinted view of good and evil. Especially given how Batman has evolved as a character since the 1960s, it’s natural to want to go back and review the series through a contemporary lens. Also, the series ended in March 1968, just as various protests and movements were picking up steam and falling prey to increasing violence. It makes sense to wonder how the Bright Knight (as Adam West called his version of the character) would cope in such a changed world.

At the same time, though, does everything have to be dark? Can’t we let a silly thing be silly? Is it so impossible to believe that there can be happiness and good, upstanding heroes even amidst chaos and darkness?

There are ways to modernize a text without destroying everything that makes it recognizable and beloved. For example, in Batman ’66 proper, they took a minor recurring character, Warden Crichton, who was a white man on the show, and reimagined him as a Black woman. (I believe they made Gotham’s mayor a Black man as well.) This way, the series acknowledged contemporary values while maintaining the property’s integrity.

But even if you did want to comment on how ’60s Batman handles (or fails to handle) realistic issues, the fact is that this comic just doesn’t do a very good job of it. It introduces gruesome violence and adult concepts and then does absolutely nothing with them. They clearly wanted to say something about the changing state of comics or superheroes’ relationship with the real world, and they even had some interesting things to say. But in the end, they just let those comments sit there with no resolution and no lessons learned. I doubt their intention was to harangue people who dare to enjoy ’60s Batman — as I said, the creators have done plenty of work on lighthearted titles — but that’s what it ends up feeling like. At the minimum, the story comes off as trying to shock readers for the sake of shocking them.

If you want to show the juxtaposition between ’60s Batman and modern Batman, do it the way Batman: Return of the Caped Crusaders did. This 2016 cartoon, which features Adam West, Burt Ward, and Julie Newmar reprising their roles from the show, had Catwoman drugging Batman into acting like Michael Keaton, Christian Bale, etc. And it’s hilarious. “Batman A-Go-Go!” is not.

No ’60s Batman comic should make me feel bad for having read it, but this one did. It’s an unfocused, upsetting story that makes me so, so glad we have the entire Batman ’66 series (plus crossover specials!) to honor the spirit of the original show. If you’re a fan of ’60s Batman or a good time in general, I strongly recommend both the TV series and the comic. I promise we don’t see so much as a paper cut in any of them.