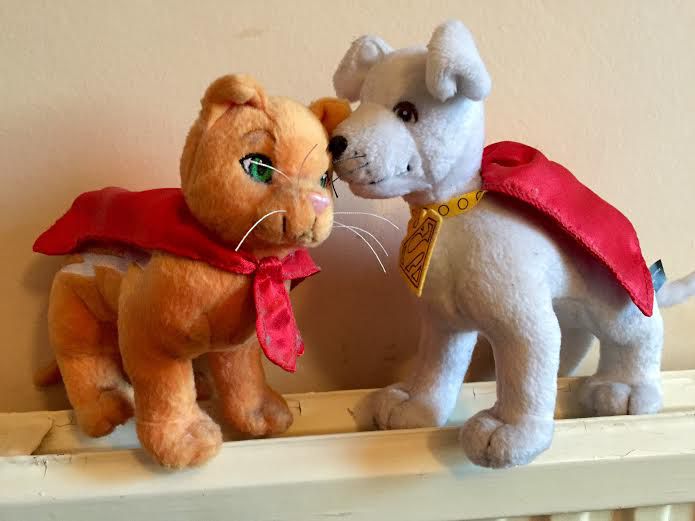 The following is a guest post by Mart Gray.

Martin Gray lives in Edinburgh, Scotland, where he works for The Scotsman newspaper. He used to edit the UK’s DC reprint packages and originated My Little Pony and Polly Pocket strips. He’s still having therapy. Martin blogs at Too Dangerous For a Girl and tweets from @MartGray.
_________

I cannot resist a monkey in a cape … No, you’ve not clicked on Comics Fetish by mistake. I’m talking Beppo the Super Monkey, longstanding member of the Superman Family.

And long lost. You don’t see the little guy these days, but once upon a time he’d regularly show up along with his fellow members of the Legion of Super-Pets. Cheesy? Yes indeed, but an idea with obvious kid appeal – heck, cutting edge Marvel paid tribute to the concept recently with its Lockjaw and the Pet Avengers series.

But while the Inhumans’ dog, Frog Thor and co are a cute bunch, it’s DC’s super-pets who will always have my heart. Just look at this bunch, in ascending oddness:

Krypto, beloved puppy of baby Kal-El, rocketed to Earth from the planet Krypton by Jor-El, apparently not a dog lover.

Beppo, one of Jor-El’s test animals, who stowed away in baby Kal’s rocket. (Two animals in and you may be seeing a pattern …)

Streaky the Supercat, an Earth moggy imbued with super-powers after exposure to a bit of ‘X-Kryptonite’ tangled in a ball of wool.

Proty II, cute shapeshifting pet of Chameleon Boy of the Legion of Super-Heroes, who eventually objected to pet status, being as much a sentient being as any other 30th-century alien.

Comet the Super-Horse, who sometimes was a centaur named Biron and sometimes a cowboy named Bronco Bill Starr and always in love with Supergirl. Try not to think about it.

So there you have it – two Kryptonian animals, an Earth cat, a protoplasmic blob and a very confused ancient Greek. They wore collars and harnesses along with their regulation capes – and Beppo even had cute little shorts so we didn’t have to see his monkey pee-pee. Separately or together, the characters would pop up occasional to liven up a story, such as the time they declared war on the Legion of Super-Heroes or Beppo became a human.

Heck, the only way the Super-Pets could’ve been any better would be if Super-Turtle, star of non-continuity gag strip fillers, had joined up – but apparently a crimefighting turtle who wore glasses in his secret identity was just too outré. Go figure.

Sadly, with the onset of the ever-so-serious Seventies, the Super-Pets faded from view, with only Krypto being seen with any regularity. And these days, outside of DC’s kids’ books and comics – hurrah for Tiny Titans and Superman Family Adventures – not at all. Sure, the New 52 has a Krypto, but today’s version is more sabre-toothed wolf than the cute doggie whose thought balloons usually contained the phrase ‘arf, master’. I’m not sure if that’s an improvement on the early 2000s version – a transformed lizard thing from a fake Krypton.

I am sure that DC needs a cute Krypto again, and stat. The New 52 is a dark enough place without Superman’s pet being more frightening than your average supervillain. Given Superman is barely trusted by the authorities these days, an all-American pooch might go some way to humanising the Man of Steel.

I’m not saying I want a full-on regular return of the Legion of Super-Pets, but a wee bit of whimsy doesn’t half brighten the day. Homages to Streaky and Comet are coming in the Crucible space school storyline just begun in Supergirl, which could be fun. And 21st-century super-pet Bat Cow recently made a stonkingly good guest star in Infinity Man and the Forever People. Or bring back Krypto’s rivals Swifty, Destructo or Kryptonite Dog. Heck, I’d even settle for a new version of Fuzzy aka 5ft tall rodent crime fighter Krypto Mouse from Fifties Superboy.

Meanwhile, I have my memories. And my plushes.