Before I took a fiction writing class in college, I was afraid that creative writing classes would attempt to teach me how to write. In reality, nothing could be further from the truth. Our professor helped each of us develop our own unique voices and never tried to make us write in his particular style. 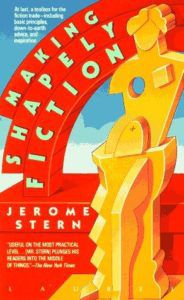 Similarly, I’ve always been skeptical of books that are advertised as “how-to” guides for writers. Articles like Jonathan Franzen’s “10 Rules for Novelists” can seem polemical. Instead of telling writers what to do, Making Shapely Fiction by Jerome Stern contains unique tools for fiction writers. This is not a book to read from cover to cover; it’s one to browse through randomly and dip into again and again. My creative writing professor often cited this book in class, which inspired me to read the entire book. It’s debatable whether any one book can make readers better fiction writers, but Stern wisely realizes that it’s much easier to explain what not to do than what to do.

Its structure is unique: instead of laying out rules, it describes several basic plot types, or “shapes.” Stern writes that there are a few universal archetypes that can be modified or combined in countless ways. I tend to have more ideas for characters, themes, and relationships than events, so this could be particularly helpful for writers like me. There’s lots of room for variety and individuality. As Stern writes on the first page: “A shape invites you to fill it.” In the first section of his book, Stern describes some of these basic forms: the journey, its inverse, the visitation, a traumatic event, the epiphany (which Stern calls the “aha!” shape) and a looming crisis, which he calls “a bear at the door.” He also names more specialized kinds of stories. For example, an “iceberg” is a story where the characters’ true emotions are not fully revealed, a “last lap” begins right before the major crisis, and a “bathtub story” takes place in a small, confined space where nothing really happens. Each of these types can function as a writing exercise or inspiration for a story.

After the first section, which explains many possible “shapes,” there’s a short interlude called “Don’t Do This.” Overall, this was helpful, although I didn’t agree with all of it. Some parts were obvious examples of clichés. Others were more subjective. One of my college professor’s pet peeves is a story that ends like this: “And then I woke up.” Stern also expresses annoyance with endings like these, because they try to trick or outsmart the reader. Also, by negating the earlier events, they make the rest of the story seem pointless. Of course, these are subjective preferences, not hard-and-fast rules. In certain cases and with especially daring writers, these techniques do work. One example is not to try to tell too many stories at once. While there are obvious exceptions, this is probably true for most writers.

The final and longest section is an alphabetical list of various terms related to writing. It’s not a typical glossary: instead, the entries explain an assortment of styles and techniques, illustrated with vivid examples from literature. As an obsessive reader, I found these examples illuminating, especially when they mentioned my favorite books and authors. He writes that Flannery O’Connor mastered multiple points of view; Yossarian from Catch-22 is an exemplar of a flawed but admirable antihero; and James Joyce perfected dialogue, atmosphere, and voice. These entries aren’t meant to cover everything, but they are fun to peruse.

Stern also says that writers should never try to be subtle. Subtlety results from skilled writing and editing and is not a goal in itself. He says that if you try to be subtle, you’ll end up implying everything that you want to say and never really saying anything. It’s better to over-explain things and then revise them in later drafts than to forget what you were trying to imply in the first place. It’s also important to remember that writing fiction is creating an imaginary world. If you don’t show something, it’s not implicit; it just isn’t there. As he cleverly observes, “Writers can’t follow their stories around and explain them.” It’s a good illustration of the gulf between authorial intent and the reality of the story.

No reader will agree with all of the advice in this or any other guide to writing. However, as a text in a college writing class or inspiration for more experienced writers, it’s a valuable resource. It’s best at describing common pitfalls and clichés of fiction writing and how to avoid them.

Are you a writer looking for more? Check out these best books on writing and these outstanding podcasts for writers.