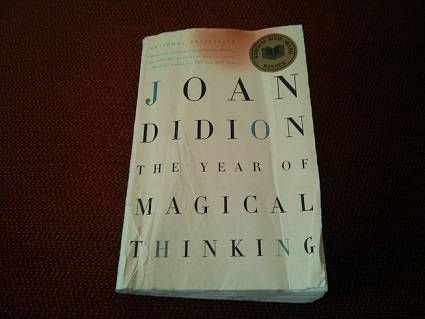 The weather was absolutely gorgeous this morning, so I suggested to my personal trainer, Mustard Kitchens, that we hop in his car and take a drive to see the Wiggly Bridge in York, Maine, a mere fifteen minutes away from where we live in New Hampshire. If you ever have occasion to visit, do so: It is an adorable little footbridge that…wait for it…wiggles when you walk on it. Mustard was thoroughly charmed.

After our visit to the bridge, we were headed home down Route 1 in Kittery, right near the Maine-New Hampshire border, when Mustard yelled, “There’s a book in the road!” and quickly pulled the car over. And there indeed, lying open on the yellow line, was a book, its pages flapping back and forth in the wind.

“Want me to get it?” he asked, but it was really a rhetorical question, because he knew that the idea of an unknown book in the road was already making me start to hyperventilate. He turned the car around and pulled up directly across from it.

“What could it be?” I wondered, as I watched him safely elude the dangerous Route 1 traffic and retrieve the book. What book could be so bad that someone would throw it out the window? I could think of a few that I personally wouldn’t mind seeing crushed by an eighteen-wheeler. I wondered if it was one of those.

But as Mustard picked it up, I caught a glimpse of the bright teal spine. Could it be? No! Was it really? Yep. He got in the car and I discovered I was correct: There in his hands – waterlogged, stained, and bent to hell – was Joan Didion’s National Book Award-winning memoir, The Year of Magical Thinking. 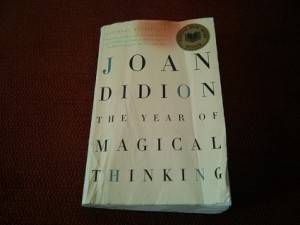 Who chucks a Didion book out the window of a moving vehicle?!? I know not everyone shares my opinion, but personally, I think Joan Didion is a legend. I treasure her writing! How did her book end up in the road?

Here are a few theories:

– A driver set it on the roof of their car while they were unlocking the door and then drove off, forgetting it was there. It clung to the car as long as it could, until it slid to the pavement.

– Someone was falsely told that Joan Didion books are illegal in New Hampshire and thought they had to dump it before they crossed the border.

– This copy belonged to a mermaid, who was kidnapped from the Piscataqua River, and thrown in a tank in the back of a truck. She threw it out in the hopes that someone would find it and follow the trail to where she was being kept.

– A couple headed to New Hampshire was having a fight about use of the word ‘literally’ and one of them got so angry, they threw the book at the other, but it missed and went sailing out the window.

– Bunnies. Bunnies. It must be bunnies.

One of these things could be true. Most likely the first one. Because when you hear hoofbeats, think All the Pretty Horses, not zebras. At least the story has a happy ending: The book was rescued and brought home, where I will love it and pet it and call it George. Maybe I’ll set up a hotline, and people can call me when they see lost or injured books, and I can come and rescue them.

Ever found a book in the wild? Tell me about it in the comments!