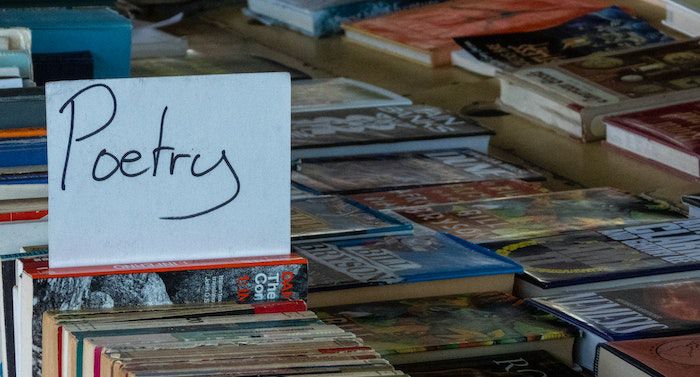 In 2019, Book Riot contributor Laura Marie called literary devices “strategies or techniques that a writer can use.” Most of these literary devices are used in both prose and poetry, but some appear more often in poetry. Poets often use several literary devices in the same poem, so identifying each one can seem tricky or ambiguous. Here’s your guide to the most common literary devices in poetry along with examples, whether you’re a student or lifelong learner when it comes to poetry.

In poetry, accent refers to the syllables or words that are stressed or emphasized. Words with more than one syllable have some syllables that are louder than others. Accent can shape the rhythm and meter of a poem. Readers and actors can also choose to accent important words.

An allegory is a story or poem with a hidden meaning: often a moral, religious, or political one. It’s not a poem, but the first allegory I read as a child was The Lion, the Witch, and the Wardrobe, a children’s fantasy novel by C.S. Lewis. Animal Farm by George Orwell is another allegorical novel.

Alliteration is two or more words in a row beginning with the same letter. “The fair breeze blew, the white foam flew, the furrow followed free.” This line from The Rime of the Ancient Mariner by Samuel Taylor Coleridge alliterates words starting with B and then with F.

This is an indirect reference, often to another work. In western countries, many poets use allusions to Greek mythology or to the Bible. The speaker of “The Love Song of J. Alfred Prufrock” by T.S. Eliot says: “To say: ‘I am Lazarus, come from the dead…’” Lazarus was Jesus’s friend whom he raised from the dead in The Gospel of John.

Anaphora is repetition of a word or phrase at the beginning of lines or verses. Layli Long Soldier’s poem “Whereas” begins each stanza with the word “whereas” — a word used in treaties and other colonial documents in the U.S.

Apostrophe in poetry means addressing a person who is absent, or an inanimate object. John Keats’s poem “Ode on a Grecian Urn” is a classic example.

In poetry, this is an extended metaphor. In Emily Dickinson’s poem “Because I could not stop for Death,” Death is personified. The conceit, or central metaphor, is a carriage ride with Death. The ride represents the event of dying, followed by burial.

Consonance is repeated consonant sounds. (Assonance means repeated vowel sounds.)“Jabberwocky,” Lewis Carroll’s nonsense poem about a monster, uses both assonance and consonance. “’Twas brillig, and the slithy toves” is consonant because of the repeating T and S sounds. In this example, Carroll’s nonsense words create an eerie tone through sound alone, not meaning. Unlike alliteration, assonance and consonance do not need to be at the beginning of a word.

In poetry and prose, diction is word choice. Poets are often very intentional about diction, picking particular words over synonyms for their sound, imagery, or secondary meanings. A related concept is syntax, or the order of words.

An elegy is a poem that laments a person’s death or the end of something. Alfred, Lord Tennyson wrote several elegies with the words “In Memoriam” (Latin for “in memory”) in the titles.

An end stop is a sentence or thought that finishes at the end of a line. This is common in traditional, rhyming poetry, with several examples here.

This is the opposite of an end stop. Enjambment is continuing a thought from one line or stanza onto the next. It often changes the meaning of the lines or creates double meanings or pauses. It can also enable longer, more prose-like thoughts or phrases. Jericho Brown’s poem “Inaugural” uses enjambment repeatedly.

Imagery is any detail that appeals to the senses. “Dover Beach” by Matthew Arnold begins by describing the sight, sound, feel, smell, and taste of the sea and air.

Inversions reverse the typical order of words. In poetry, this can sound more dramatic or old-fashioned or fit the rhyme scheme of the poem. In English, adjectives usually come before nouns. “My fair lady” is standard word order; “my lady fair” is an inversion.

A metaphor is related to a simile. Instead of overtly making a comparison, though, a metaphor says that one thing is another.

Meter is a structured rhythm in poetry. William Shakespeare wrote most of his plays and sonnets in the meter of iambic pentameter. In iambic pentameter, each line has ten syllables, divided into five two-syllable iambs. The first syllable of each iamb is unstressed, while the second is stressed or accented. Antonio in The Merchant of Venice says: “In sooth, I know not why I am so sad.” This line is in iambic pentameter, as reading it aloud or clapping the beat can show.

Onomatopoeia is any word that imitates sounds. The nursery rhyme “Old MacDonald Had a Farm” teaches children a different animal noise onomatopoeia in each verse: quack, moo, and so on. Less obvious examples are words like buzz, crack, pop, hiss, and tap.

Personification is giving human qualities to animals and objects. For example, if a poem says, “The wind whispered,” that’s personification. Pathetic fallacy is a more specific form of personification that attributes human emotions to objects. At the end of Shakespeare’s Romeo and Juliet, the Prince says: “The sun for sorrow will not show his head.” This is an example of pathetic fallacy.

Many poetic devices use repetition. Maya Angelou’s poem “Still I Rise” repeats phrases like “you may” and “I rise.” This creates a powerful rhythm and fits the poem’s theme of resilience.

Rhymes are similar ending sounds in two or more words. Not all poetry rhymes. Here are some common types of rhyme in poetry:

End rhyme is a rhyme at the end of a line. The first two lines of Alfred, Lord Tennyson’s poem “The Lady of Shalott” use an end rhyme: “lie” and “rye.”

Half rhyme or slant rhyme: These are words with some shared end sounds, but not all. “Fine” and “time” half-rhyme because of the long I sounds with different end consonants. Many songs use slant rhymes.

Internal rhyme is a word anywhere in the middle of a line rhyming with a word at the line’s beginning or end. An example is the opening line of “The Raven” by Edgar Allan Poe: “Once upon a midnight dreary, while I pondered, weak and weary…”

Rhythm is the beat or flow of a poem. It’s a more loose term than meter.

This is a comparison using “like” or “as.” William Wordsworth uses a simile in this line: “I wandered lonely as a cloud.”

Symbolism is when one word or object represents another. Often the symbolic meaning is abstract and open to interpretation. This poem by Dylan Thomas uses “night” to symbolize death. Many poetic devices include symbolism.

A poem’s theme is its underlying message or idea, often not directly stated. Love, death, morality, and nature are common themes in poems.

Verse is poetry, as opposed to prose. Verse can also mean a metrical line, stanza, or other distinct section of a poem, or the form in which it’s written. Two popular types of verse are blank verse and free verse.

Free verse is an open-ended form of poetry with no particular meter and usually no end rhyme. Contemporary poets who write in free verse include Rupi Kaur, Nikita Gill, and Nayyirah Waheed.

There are many more poetic literary devices, and some of these meanings overlap. Once you understand how common literary devices in poetry work, it becomes easier to recognize and interpret them or use them in your own writing. Reading poetry is fascinating and enjoyable on multiple levels.