No spoilers, but the mom in Marcy Dermansky’s Twins is terrible. I mean, the dad is pretty terrible, too. But there’s just something about this neglectful mom that pushes all of my buttons. I spent the majority of this book face-palming just about every time she was mentioned.

“Holy shit. You are awful,” I actually whispered out loud to my book, because this is a thing that I do.

And then, on the heels of that, there was the thought that no matter how flustered I get while trying to juggle my work and my toddler (#wahm), no matter how many swear words my daughter picks up from me, no matter how often I prioritize my own sanity over the demands of attachment parenting, I will never be that bad.

I mean, at least there’s that. 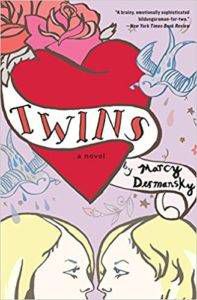 The eponymous twins of Twins are also pretty awful (Dermansky is so good at writing unlikable characters that you, nevertheless, can’t look away from), but one can’t help thinking that nurture had as great a part in this outcome as nature. How much that knee-jerk response has to do with our culture’s entrenched assumptions about the responsibilities of motherhood is another conversation entirely. Still, it’s tough to ignore the fact that literature is filled with bad moms we love to hate.

So, mothers: if you’re approaching Mother’s Day with the creeping suspicion that you don’t entirely deserve that morning yoga class, that delicious baked bouquet, and that Mother’s Day brunch at your favorite vineyard, let these mothers I love to loathe* give you some much-needed perspective.

In Ramona Blue, Julie Murphy’s followup to Dumplin’, Ramona’s mom doesn’t have much to recommend her. She left her husband and two daughters after Hurricane Katrina and has barely looked back, preferring to float along in blissful singledom on a river of free-flowing booze. But what’s most upsetting about Ramona’s mom is her dismissiveness of her daughter’s sexual identity, which likely plays a huge part in Ramona’s struggle when she comes to suspect her sexuality is more fluid than she first thought.

I know. Everyone is all grabby-hands over Celeste Ng’s forthcoming Little Fires Everywhere. But I still can’t get Everything I Never Told You out of my head. The book starts with a young girl’s death, and then flashes back to reveal all the disparate elements that brought us to the end of her life. As the plot unfolds, one can’t help but feel that Lydia Lee was simply crumbling under the weight of her mom’s expectations.

Something about this particular brand of overbearing literary mom makes my skin prickle, though I myself have been known to hover at times. Every time I read Stephen King’s It, I want to rescue Eddie Kaspbrak from the mother who is totally holding him back. And I feel so bad for the Lisbon girls in Jeffrey Eugenides’ The Virgin Suicides, who are suffocating under their mom-imposed house arrest. When will the horrors end?

What I love about Meg Medina’s work is how real it all feels. Perhaps that’s why it hits especially hard when the mom in Burn Baby Burn fails to protect her daughter, Nora, from her bullying brother, Hector. And in this case, the term “bully” actually feels like an understatement. Hector seems more like a burgeoning psychopath, and while his mother’s urge to protect him from the consequences of his actions seems at least partially warranted, she does so at the expense of her daughter’s safety. This misguided protection may be partially motivated by fear, but still.

Not only is the mom in Sapphire’s Push under-protective, failing to keep her daughter safe from harm (the protagonist, Precious, is raped by her father, becoming pregnant twice; her mother’s response is jealousy), but she is also abusive, keeping Precious under her thumb in order to collect welfare checks.

6. The Mom Who Is Literally Killing Her Children

Before Gone Girl, Gillian Flynn gave us Sharp Objects. In it, the main character’s mother engages in (SPOILER ALERT) Munchausen syndrome by proxy, slowly poisoning her daughters, a form of abuse and neglect that is often thought to be undertaken as a means of either eliciting sympathy or taking advantage of others.

* This list gets dark fast and, I have to say, I don’t love to loathe all of these moms. Some of them, I just flat-out loathe.