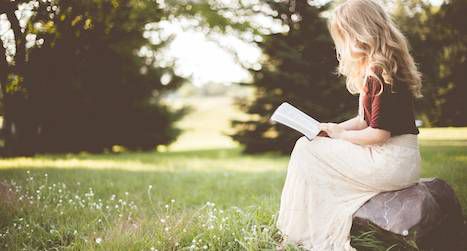 This is a guest post from Kathleen Keenan. Kathleen is an editor and writer in Toronto. She writes a monthly newsletter for the indie bookstore A Novel Spot and occasionally blogs about what she’s reading at shelfcontrol.wordpress.com. She has an MA in English with a focus on Victorian fiction, and there is nothing she loves more than a very long Victorian novel. Follow her on Twitter @KathleenMKeenan.

Real life is not a 700-page Victorian novel, but I read too many of them at an impressionable age to know that. It’s unlikely that any distant relatives are going to die and leave me an inheritance, or that I will be hired to work as a governess by a man with a secret past, but for better or worse, I’ve learned many a lesson from Victorian novels. Here are some important things to remember, care of Dickens, Hardy, the Brontes, and co.

Do not, under any circumstances, start coughing.

If you do, you will probably slowly weaken and eventually die from a mysterious, lingering ailment. On the bright side, you’ll look beautiful thanks to your consumption-induced rosy-cheeked glow. Everyone will be very sad. See: every Victorian novel ever, like Bleak House, Jane Eyre, Nicholas Nickleby, and so on.

It’s unfortunate, but the only flirting I know how to do is the kind from Victorian novels. This mostly involves waiting for men across the room to stare at me. Then, I blush and look away, perhaps accidentally exposing a bit of wrist and forearm. Nothing says “marriage material” like a blush and a delicate wrist (according to John Thornton, the love interest in Elizabeth Gaskell’s North and South, who is drawn to heroine Margaret Hale because of her beautiful arms). Ideally, I would then saunter off to talk to the local curate to show that I’m a serious-minded lady, but there’s a shortage of curates in my neighbourhood bars.

The spinster life sounds boring as heck, so get some hobbies.

Spinsters abound in Victorian fiction, normally taking the form of retired governesses who have to live dreary existences on very minimal incomes. Luckily, these spinsters occupy their time by bringing baskets of food to the poor, knitting things for charity, and collecting money for various causes. Spinsterhood is a lot better these days (I have a job, for one thing), but the advice to cultivate a hobby or dedicate one’s free time to an important cause is still valuable.

Learn how to endure.

My favourite passage in all of Victorian literature is the stone and scorpion passage from Charlotte Bronte’s underrated novel Shirley. It’s long, but it deserves to be quoted:

“You expected bread, and you have got a stone: break your teeth on it, and don’t shriek because the nerves are martyrized; do not doubt that your mental stomach—if you have such a thing—is strong as an ostrich’s; the stone will digest. You held out your hand for an egg, and fate put into it a scorpion. Show no consternation: close your fingers firmly upon the gift; let it sting through your palm. Never mind; in time, after your hand and arm have swelled and quivered long with torture, the squeezed scorpion will die, and you will have learned the great lesson how to endure without a sob. For the whole remnant of your life, if you survive the test—some, it is said, die under it—you will be stronger, wiser, less sensitive.”

Is that not the most hardcore thing you’ve ever read? The Victorians are famous for being repressed, and that single passage shows why better than a million dissertations on the subject. If someone puts a real scorpion into your hand, definitely throw it back before it can sting you, but when life hands you a non-poisonous disappointment, sometimes the best thing you can do is “endure without a sob” and move on to something better.

If at first you don’t succeed, try again.

Victorian novels are long for a reason: people take time to reach their goals, whether that goal is marrying someone they don’t hate, working their way out of poverty, or convincing their husband that they aren’t in love with someone else. In Thomas Hardy’s Far from the Madding Crowd, Bathsheba marries one mediocre man and almost marries a second before she realizes whom she really loves. In North and South, Margaret faces the deaths of basically everyone she loves before she finds happiness via an inheritance and marriage to a mill-owner she used to hate. Life is long (unless you have consumption) and happiness takes time—so don’t be surprised if your feelings change along the way.