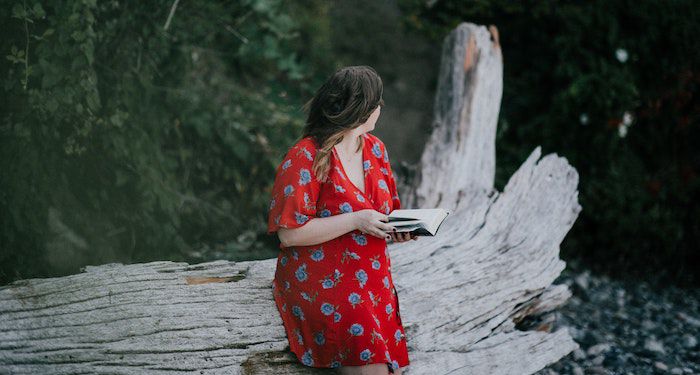 This post contains discussion of unhealthy relationships and disordered eating.

When “Blank Space” by Taylor Swift came out, my roommate and I put the music video on a loop and sang passionately along. At that point, we’d dated for years and broken up, but we still lived together, caught in a toxic loop. We loved each other; we hated each other. We were the most important person in each other’s life; we were the thing ruining each other’s life.

It’s catchy, of course. Taylor Swift has a knack for songs that get in your head, and ones that speak to core emotions and experiences in a way that feel personal despite being universal. But we’d never listened to any of her other songs back to back together. In the music video, Swift is a parody of herself, a version of the tabloid depiction of her as a serial dater. She is almost cartoonish. Her and her latest boyfriend have a romantic weekend together, full of picnics, portraits, riding bikes in a mansion together. Soon the tide turns, and she’s angry and jealous, destroying things, mascara running down her face, slashing his portrait with a knife.

“So it’s gonna be forever, or it’s gonna go down in flames. You can tell me when it’s over if the high was worth the pain.” We sang the lyrics as our relationship had already gone up in flames, but wasn’t yet reduced to ashes.

Taylor Swift wrote the song as a response to critics’ depictions of her in the media. She explains that these comments were once hurtful, but she began to think about what an interesting character this made-up version of herself was, and she painted this picture of her. She took a misogynistic stereotype of herself and fleshed it out, tried that character on. It’s silly and over the top, for sure, but it also doesn’t feel hateful to me. There’s something about the character in that video that’s captivating — it doesn’t feel impossible that she keeps finding men to play that game with.

It wasn’t long after that when I finally moved out — or, to be completely honest, my ex moved out and I was forced to find a new place. Within six months, we’d stopped speaking to each other. When I listen to that song, I think about that toxic relationship, and I hold some fondness for it. The drama, the heightened emotions and stakes: it has its draw. In “Blank Space,” Taylor Swift creates a world where the worst version of herself (at least as seen by the media) is true, and that person has her own appeal.

In that video, I see the version of myself I fear returning to: the person so addicted to the pain that I keep coming back to something that can never be healthy or stable. Somehow, the satire makes it less scary. I hold that younger version of myself within me: the 18-year-old who was so starstruck to be going out with this older, cooler queer person; the 19-year-old wrapped up in the romance; the 20-year-old sure I could fix this other person’s pain and flaws if I just tried hard enough; the 21-year-old not sure how to leave. That version of myself is flawed and vulnerable, but they’re worthy of love and care.

I swear, I’m getting to the book part.

When I picked up Milk Fed by Melissa Broder, I had no idea what I was getting into. It follows Rachel, a twentysomething woman who is obsessed with food. She carefully counts calories and dutifully exercises to keep thin. She is ravenous, but she believes that she has to keep this tight hold on herself, because if she even slipped for a moment, she would spin out of control. She’d never stop eating, never stop gaining weight.

Her therapist asks her to sculpt her fears about weight gain, and she uses every piece of clay available to form the fat version of herself she is terrified of. Her therapist responds, “I think she’s quite lovely. And I think she’s worthy of love — more than worthy of love, actually. Don’t you think so?” Rachel storms out of the session and doesn’t return.

She goes on to meet a fat woman who looks remarkably like her nightmare version of her body, and she quickly falls in love with her.

This is one of the few books I’ve read that left me actually sobbing. I’ve definitely felt the pull toward restrictive, regimented eating before — the illusion of control — and it was difficult being immersed in Rachel’s thoughts. It’s a cathartic read, though, as Rachel goes from extreme restriction to feeling out of control to finding something like balance. It’s a book that asks, What is your worst fear of your body? Isn’t that person worthy of love?

I think that many — most? — women fear being out of control, and often feel like they’re right on the precipice of it. This story asks: What happens if you let go? If you fed that hunger until it was appeased? What do you have to lose?

In Milk Fed, Rachel is forced to face her worst nightmare of herself, and she finds that person unexpectedly worthy of love and respect. Often, I will turn a critical eye on my body, and then I’ll realize that on someone else, I would love those same characteristics. If I fear gaining weight, what size is so terrible, when I see and love those bodies when they belong to other people?

“Blank Space” and Milk Fed may not seem to have much in common, but I find the same profound idea in both of them: what is your worst fear of becoming? What is the part of your personality, the version of your body that you spend your life avoiding? And can you imagine that version of yourself with compassion?

Imagining my worst case scenario version of myself sympathetically takes off a lot of pressure. It reminds me that there’s nothing I have to do to be worthy of respect and nothing I can do that will lose me that; just being is enough. I can imagine the possibilities I want to aim towards, but I don’t have to be running from my worst fears. That funhouse version of me? The one with the body and personality I’m scared to have? I carry her with me, too, and I will try to tend to her instead of running from her.