Little literary magazines come and go. Shi’r was here one decade, gone another. So too Tin House, Souffles, The Partisan Review, and Black Clock. Indeed, author Nick Ripatrazone went so far as to write last year that “Literary Magazines are Born to Die.” He didn’t mean it as a bad thing, but rather that we should recognize they have a life cycle and pay tribute to our literary ancestors. 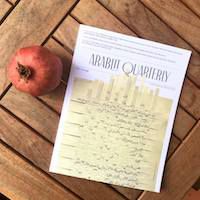 As a species, little literary magazines have persisted, blossomed, and flourished. If most of the publishing landscape is big, profit-oriented, and difficult to maneuver, then the little-lit-mag landscape is small, bad with money, and welcoming. Finding a traditional publisher can be soul-killingly difficult. But finding a little mag to love your work? It’s doable.

The sheer number of living lit mags also demonstrate a clear hunger to belong to the literary discourse. A few magazines have predated on this need, charging exorbitant fees for submissions, writing courses, and editorial assistance. But a lot of little lit mags—let’s optimistically say most—have made room, in the best anti-capitalist spirit, for tens of thousands of literary voices.

Why open yet another little magazine? The answer to the question is, naturally: Why not? Although you might need a few more reasons during the long hours of formatting the pages, rooting out errors, fielding angry emails, and remembering you forgot to ask for so-and-so’s bio.

We recently launched the second issue of ArabLit Quarterly. After a lot of frustration trying to get the print version uploaded on Blurb, we eventually decided to go with Amazon. The biggest thing we learned was probably: It always takes more time than you think! But also:

1. Find a space where you’re comfortable. I moved to Cairo in the summer of 2001, and I spent my literary coming-of-age hanging around Arab book fairs and literary translators. Although I’ve attempted to tackle other niches, the one I always fall back into is Arabic literature in translation. I’m by no stretch an expert. But this is where I’m most comfortable.

2. Community is essential. ArabLit Quarterly is prrrrobably not going to make me rich or famous, give me better teeth or healthier skin, or put my children through college. Alas! So what makes it worthwhile? Creating fresh aesthetic experiences and stretching literature, certainly. And yes, it’s also the friends we made along the way.

3. A budget is necessary. Ugh. I am anti-capitalist both by belief and by circumstance, but it’s important to know how much you can pay your contributors without emptying your personal checking account.

4. Apply for grants. We’re not a U.S. nonprofit, since none of ALQ’s core members live in the U.S. That cuts off a lot of possibilities. But there are other opportunities out there. Our second issue, for instance, we floated in large part by the Gumroad Creators Fund, which recently opened up.

5. Define your own success. There might be a page out there, if I google hard enough, that tells me whether ArabLit Quarterly is successful or not. But that seems about as promising as an internet search for “my left breast hurts am I going to die?” or “does life have meaning?” It’s bound to take me to a dark place. What could “success” be for ArabLit Quarterly? I’m not sure yet. But maybe just being able to talk about it is enough.