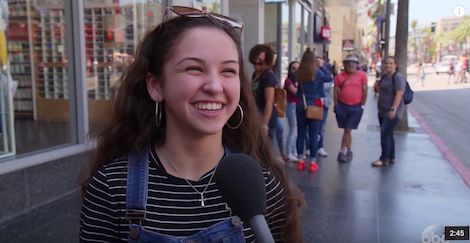 If you are a human being who uses the internet (and I’m guessing you are, because you’re here), you’ve probably seen Jimmy Kimmel’s book video, “Can You Name a Book? ANY Book???” floating around (if not, you’ll find it below). In the obnoxious video, the crew stops seemingly random people on the street and, surprise, asks them to name a book—any book. Friends shared it all over my Facebook feed and I finally broke down and watched it, knowing I was in for two minutes and forty-five seconds of eye-rolling. But not because people couldn’t name books. 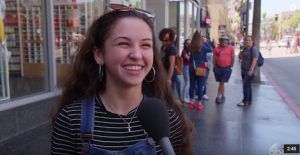 Here’s the thing: Jimmy Kimmel has championed for some great causes. But this segment, as fellow Rioter Nicole Mulhausen points out, is a non-reader shame fest—and that in and of itself is a shame. What’s more, I’m a librarian. I’ve recorded reading over 800 books on Goodreads. Even worse, I have a button that literally encourages people to ask me what I’m reading. On the rare occasions someone actually asks me that question, my mind goes blank. I flounder for a few moments before I’m able to produce a title. I watched Jimmy Kimmel’s book video and imagined myself as someone stopped abruptly on the street and asked to name a book with a camera in my face, no less. There’s just no scenario in which I could imagine myself having an answer prepared. (This is also why that, despite being rather good at it at home, I’m convinced I would utterly fail at Jeopardy if I ever competed on the show.)

This isn’t to say there aren’t people out there who would. In fact, I’m fairly certain there were a good number of folks Kimmel’s crew asked to name a book who had one ready to go. And I’m also fairly certain those were edited out so Jimmy Kimmel Live! could make their “comedic” point. Because, ha ha, these people are so stupid they can’t even name a single book. What a sad state America is in! And how wonderful am I, able to name ten books off the top of my head from my comfortable bed, right? And let’s not forget the one guy who names Rudyard Kipling’s The Jungle Book and is bullied into going against his memory and convinced to “admit” The Jungle Book is not a book, but a movie.

But let’s look at the real data. The data that matters. Millennials (which, based on appearance, seemed to be the group that most interacted with Kimmel’s crew for this video) use public libraries more than any other generation. So, even if the premise here is accurate—that things are bookishly dismal now—(which it’s not), there’s hope for the future. Additionally, more than 75% of people have read a book in the last year (it’s worth noting Pew’s article is a glass-half-empty look at this data, but I feel the actual numbers are definitely glass-half-full; Kimmel cites this data at the top of the segment and, like Pew, indicates this is disappointing data). And, as recently as 2015, the average American read twelve books in a year. The fact is, things are not so dire as Kimmel’s show might have you believe.

Furthermore, the act of trying to remember something can actually cause you to forget. What’s more, forgetting trivial things (like book titles) is a psychological adaptation that helps keep us alive—literally. Remember book titles at your own peril.

No shade to Jimmy Kimmel, but this video is the worst. Let’s stop shaming non-readers with these ridiculous and unscientific videos. Tell me it’s just entertainment, tell me I’m a stick in the mud, but really, “Can You Name a Book? ANY Book???” is elitist trash designed to manipulate us, the viewers, into believing we are superior. Such fragile egos we have.