Before I went to college in Virginia, I grew up in a smallish town in New Hampshire. New England is a funhouse for literary nerds. All within a few hours of each other—some, just a few minutes—are Louisa May Alcott’s, Ralph Waldo Emerson’s, Nathaniel Hawthorne’s, Robert Frost’s, Mark Twain’s and Emily Dickinson’s homes (among many others), which you can tour to varying degrees. Until I left, it never occurred to me that other areas might not be so steeped in books and literature. My time in college was spent in a small school with a focus on creative writing, where books and literature were the crux of most of my relationships and conversations. Then, I moved north to Washington, D.C. and the difference was stark. Suddenly, there was a phrase worth googling: How to make bookish friends.

I was—am—an unfortunate combination of shy and introverted. D.C., for all its benefits, is not the most bookish community I’ve lived in, despite having twenty-six-branch public library system, being the home of the Library of Congress, and featuring a handful of bookstores. And because politicking requires a lot of networking and, let’s face it, extroversion, finding friends with whom I could comfortably spend time with was rough. So I was presented with the problem of wanting friends and conversation in my new home, and not having any natural ways to make those happen. I attended a few library events here and there and made connections with coworkers across my three jobs. But it wasn’t enough. So, I came up with a plan.

Rather than googling “how to make bookish friends,” I put myself on a mission to find out where I could get a small number of buttons made, inexpensively, and of my own design. I picked one of the many available vendors, threw together a color scheme, font, and phrase, and waited for my order to arrive.

The buttons showed up not too long after and I immediately attached mine to the strap of my bag. I took to carrying the bag—and, therefore, the button—with me everywhere: on the bus, the Metro, the sidewalk, the grocery store, the library, on and on. Sometimes, the button would be hidden by the lapels of my jacket, but I did my best to keep it visible. Finally, one day on the train home from work, someone asked me with a mischievous smile and a gesture toward my button.

“What Are You Reading?”

I was holding my Kindle, so it wasn’t so simple as lifting my reading material to reveal the title.

We chatted for a couple of stops about fantasy and how we felt about different big-name series and our conversation ended when she got off at the first stop in Virginia. 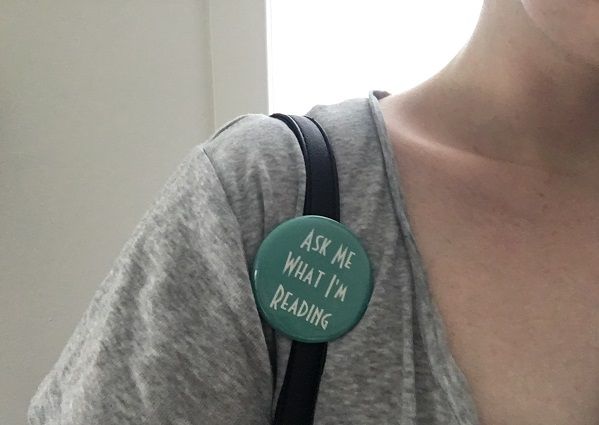 I’ve since had one other person ask me what I was reading while wearing the button, and a coworker (a librarian) once commented on how she liked the idea. It has not quite been the success I thought it would, but I still get a small thrill every time I use the bag the button is pinned to.

But even if the button hasn’t led me to any long-lasting bookish friendships directly, it’s reminded me that “What are you reading?” is always a great conversation starter. Whether I’m seeing someone on the train with a book (and I maintain it’s only acceptable to interrupt a person reading in public to briefly ask what they’re reading with the intent of finding out what they’re reading—not with the intent of getting a date—or to warn the person they are in imminent danger), meeting an old friend and stuck for conversation topics, or want a way to reconnect with someone, “What are you reading?” is a beautiful way to kindle communication.

Plus, while someone may not ask me a direct question when they see the button, the button still serves as a signal to my interests. Whether other people have approached me as a result of that, I don’t know, but I think it’s entirely possible.

The button hasn’t caused me any trouble so far, though that was something I considered—would strange men see this as an opening to harass me? So far, I haven’t encountered anything like that. If an “Ask me what I’m reading” button is something you’re interested in to up your bookish friend game, I recommend picking a vendor and getting to work—or see if your library has a button making event coming up.

Looking for more on bookish friendships? Check out Use a Book to Stay in Touch With Friends, and The 5 Stages of Recommending a Book to a Friend Who Will Never Read It.