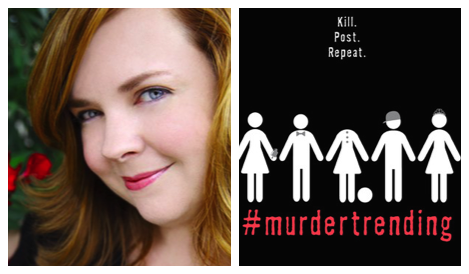 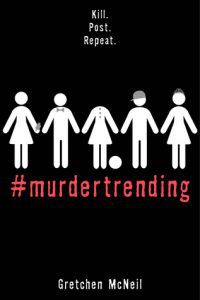 If you haven’t heard the name Gretchen McNeil before, you certainly will when her new book #MURDERTRENDING hits shelves. McNeil has become something of a Stephen King for the YA set, writing such suspenseful and eminently readable thrillers as  Ten (made into a Lifetime movie), the Get Even duology, and Relic. In this new book, her murderous imagination is entirely unleashed as she tells the story of a brutal reality TV show in which incarcerated felons are gruesomely murdered on live TV for the world to watch. Let’s let the official blurb fill you in:

“WELCOME TO THE NEAR FUTURE, where good and honest 8/18 citizens can enjoy watching the executions of society’s most infamous convicted felons, streaming live on The Postman app from the suburbanized prison island Alcatraz 2.0.

When eighteen-year-old Dee Guerrera wakes up in a haze, lying on the ground of a dimly lit warehouse, she realizes she’s about to be the next victim of the app. Knowing hardened criminals are getting a taste of their own medicine in this place is one thing, but Dee refuses to roll over and die for a heinous crime she didn’t commit. Can Dee and her newly formed posse, the Death Row Breakfast Club, prove she’s innocent before she ends up wrongfully murdered for the world to see? Or will The Postman’s cast of executioners kill them off one by one?”

With a concept like this, we couldn’t wait to find out as much as we could about how McNeil came up with this over-the-top killer premise.

Book Riot: OK, I have to start by asking: could you please explain the concept for this book, and let us know how on EARTH you came up with such a delightfully dark premise?

Gretchen McNeil: It all started with a discussion of horror and comedy, and why I love them together. That discussion included references to films like Scream as well as the magic that was Fox’s series Scream Queens. The question was posted: “What about a YA novel with Scream Queens levels of gore and camp?” My husband and I had recently rewatched the 1987 camp and gore (and Schwarzenegger) classic The Running Man which is very, very loosely based on a Stephen King novel of the same name, and suddenly, I had a book idea.

BR: Your books often present dark, freaky situations for teens. Was this the sort of book you enjoyed as a teenager? What were some of your favorite books from that time in your life?

GM: I loved a good ghost story. I’d progressed from Louisa May Alcott to Jane Austen to the Brontes, and then discovered the world of Victorian ghost stories. Le Fanu, M.R. James, Gaskell, Henry James, Broughton, Collins, Riddell… I was all in. And then I discovered Agatha Christie…

On a more contemporary note, my early teen years were spent stalking the library for the latest Christopher Pike releases. I think if you were to dissect my horror/suspense novels, you could easily detect these three main influences: Christie, Pike, and the Victorians.

BR: This sort of slasher horror is becoming more and more popular among teens. What do you think it is about these types of stories that appeals to young people?

GM: Personally, I think they’ve always been popular (see Christopher Pike obsession above.) If you look at the history of horror films, especially since the 1950s, teens have always been a target audience. And think in terms of YA: even back in my day, when there was merely a fraction of the teen-focused literature that we have today, two of the most popular writers for teens were Lois Duncan and Christopher Pike whose works are as iconic today as they were thirty years ago.

I think the love affair between teens are horror lies in the titillating nature of the genre. You can experience something dark and scary and maybe even disturbing without actually experiencing something dark, scary, and disturbing. It’s exciting! It’s taboo! And ultimately, it’s safe.

BR: What sort of research did you do when putting together the creepy world and events of #MURDERTRENDING?

GM: Well, the good thing (for me) in setting #MurderTrending five minutes in the future – as opposed to five years or five decades – is that the world is our world, the problems are our problems. And to that end, it didn’t require nearly as much traditional research as a historical or even a high fantasy novel might entail. Plus, Alcatraz 2.0 is actually a real place. Treasure Island, a man-made island attached to the rocky outcrop that anchors the two spans of the Bay Bridge between San Francisco and Oakland, really exists. So do many of the landmarks described in the book, from the duplexes that have been transformed into The Barracks, to the old Navy brig, to the pavilion. You can go there tomorrow and see them all.

That said, there was a heavy world-building element in regard to the rules of Alcatraz 2.0 that required if not actual research then certainly some imagination on my part.

BR: What, if anything, are you able to share about a sequel for this book?

GM: Without spoiling the ending of #MurderTrending, what I can tell you is that #MurderFunding follows a girl named Becca who, in the aftermath of her mother’s death, is confronted with the idea that instead of the cheerful stay-at-home-mom she knew, her mom might actually have been an Alcatraz 2.0 serial killer. In an effort to find out the truth, she heads to LA over winter break to audition for a reality game show that may or may not have a connection to The Postman.

I can also share with you that instead of the ten thematic serial killers found on Alcatraz 2.0, #MurderFunding has twenty, and they are even more insane and over-the-top than they were in the first book!

BR: Your book follows in the grisly tradition of works like The Running Man, Battle Royale and The Hunger Games where part of the horror is knowing the public is watching people die for entertainment. Those books were each written before 2018’s glut of reality tv shows. How did writing your book in the era of reality TV affect that element of the plot?

GM: The idea of using violence as entertainment is ancient. Gladiatorial games, the guillotine at the Place de la Concorde, heretics thrown to the lions or burned at the stake, even Pay-Per-View fights are all just different pews in the same church. The concept has been explored up, down, and sideways in modern storytelling, from Mad Max Beyond Thunderdome to The Hunger Games, from Death Watch to The Running Man. Most of these settings involve future dystopias, where the iron fist of a ruling government anesthetizes the public with state-sponsored violence. But the question I asked myself with #MurderTrending is this: how far away from that reality are we?

So I suppose 2018 has influenced #MurderTrending, especially in terms of current events, but as far as murder as media, I’m just following a human tradition that dates back centuries.

#MURDERTRENDING will be available on August 7, 2018.