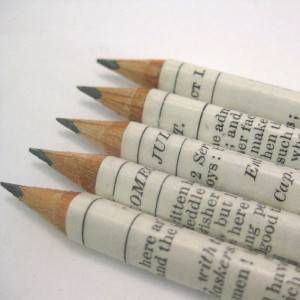 This is a guest post from Mariam Tareen. Mariam is a writer and editor from Lahore, Pakistan. She has an MA in Creative Writing from Royal Holloway, University of London. She loves books, and would love to write one some day. Follow her on Twitter @mariamtee.

As a writer, but primarily as a procrastinator, I have experimented with many writing tools. I’ve read about the writing habits of famous writers, including their preferred writing instruments. Everyone knows that writers attach great importance to their writing tools and habits. Whether they write in the morning or evening, whether they write sitting up or lying down (Truman Capote could only write when he was “horizontal”), whether they compose on paper or a screen, it matters, greatly.

The pencil seems the least remarkable of the writing tools we have at our disposal. A pencil is what a child is given to use by adults who don’t want pen stains on their white sofas. But many famous writers, all of them adults, wrote with pencils: Ernest Hemingway, John Steinback, Truman Capote, Joyce Carol Oats.

For Hemingway, writing in pencil kept the writing “fluid longer so that you can better it easier.” “I like the slowness of writing by hand,” said Susan Sontag, another pencil-writer. There is something unique about taking a pencil and pressing it down along a piece of paper, following the meanderings of your mind. The flow of the pencil matches the flow of our thoughts. When we write with a pencil, we are learning as we go along. We know that what we are writing is far from its final form. We can make sense of it later. This pencil-on-paper experience is a world away from composing directly onto your computer screen.

“Most of us compose directly on screens at some point in the writing process… But the screen can make our work look neat and tidy – finished – before it is. We can swoop in, search and replace, cut and paste, highlight, delete, and all the while the screen absorbs the changes and still looks the same… The evidence of the mind making the thing – made visible in cross outs, the thick rewriting of words over other words, the fanciful sketched… This is work being made in real time. Work that reveals its scars… It will look messy, because it is messy. It should be that: a beautiful, complicated mess.”

Granted, your writing doesn’t have to look like a beautiful mess. It doesn’t really matter to me what it looks like – I’m not going to frame my scribblings for people to marvel at, but what is important is the process of making a mess. And making a mess is most possible, most encouraged, when we write with a pencil. It gives us the freedom to wander and explore, leaving it to a later time to see what it will look like once it’s finished. And this is important when you are writing anything, but especially fiction. There is a great chance of discovery if you don’t know what you want to write about, if you you just start writing and see where it takes you. It’s just a hunch, but I think novels that are written that way are the ones that are still cherished hundreds of years after they are written.

There must be people who think in complete sentences, but for the rest of us mortals, writing does not come easily, especially when writing fiction. A pencil understands this human weakness better than the computer, better than the pen. A pencil is more forgiving.

Some of the most famous advice to young writers comes from the poet Rainer Maria Rilke. In 1903, in a letter addressed to a young poet, he wrote: “Have patience with everything that remains unsolved in your heart. Try to love the questions themselves, like locked rooms and like books written in a foreign language. Do not now look for the answers.” It’s easier to write with uncertainty, if you write with a pencil.