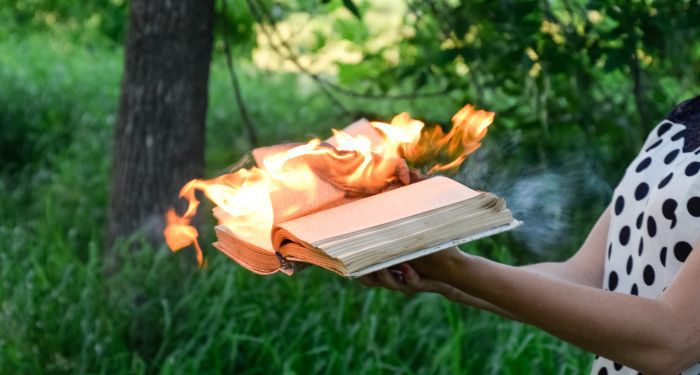 Censorship is not a new problem, nor is it as unnuanced as banning a book from a school library. In fact, it is such a ubiquitous and widespread occurrence that not only does it have its own, very busy tag on Book Riot, but it merited a frequently cited article full of resources and advice for both citizens and gatekeepers. Censorship affects society at large, but its most harmed are — always — the most marginalized communities and their most vulnerable members, those who don’t have the ability, for a multiplicity of reasons, to access those books that have either been banned or kept out of libraries in one way or another.

The publishing industry is at a uniquely privileged position to combat book censorship. But what do they really do? If you take a look at the list below, you’ll see that there’s a lot of signing statements, and of gravely stating that they stand against censorship and for freedom of speech. Speaking up is important to get the information across, of course, but it is hardly enough. The resources needed to face censorship in all its forms, including book challenges and bans, are of a more concrete nature: money and legal resources.

To begin with, it is important to understand what censorship is and isn’t, as well as to be able to identify its different faces. Book banning, after all, is only one of the ways in which censorship can manifest itself. But it is also the most well-known. And, although it certainly isn’t a new phenomenon, Suzanne Nossel, the chief executive of PEN America, explains that it is now happening at a dizzying pace: “In previous times, we’d deal with a few of these situations a year. Now we’re dealing with new challenges and bans every week, and at a much larger scale.” Librarian and critic Alex Brown agrees: “Book bans aren’t new, but we haven’t seen this kind of surge in years. In 2020, 156 challenges, censorship attempts, and bans were reported to the American Library Association; in just the last three months of 2021, 330 were reported. Countless more skated under the radar or weren’t reported to ALA at all. This new wave hit hard and fast and shows no sign of abating.” Indeed, it has not. All of 2021 saw 729 bans of 1597 books, according to the ALA.

Censorship has other faces, too, and it goes beyond certain school districts or library boards. As Nossel points out, “it’s legislation being introduced in state houses to impose sweeping bans on what kinds of books are available to students.” It’s also increasingly partisan, becoming embroiled “in a much larger political battle over the narratives that are accessible in this country, which narratives communities want to elevate and to suppress.”

Kelly Jensen identifies the root of the problem: white supremacy and power. This also manifests in the failure to include materials in a collection, either because they go against the gatekeepers’ beliefs or because they are afraid of backlash. In cases such as either of these, censorship wins out in advance.

What Are Publishing Houses Doing?

One of the most significant and impactful measures taken by publishing recently belongs to Markus Dohle, chief executive of Penguin Random House, in collaboration with PEN America. On 6 February, PEN announced that Dohle would donate at least $500,000 in order to launch the Dohle Book Defense Fund. Their stated goals are to fund “initiatives to educate the public, partner with local community groups to advocate against censorship, track and expose the egregious assaults on books and ideas playing out in classrooms, state legislatures and other arenas.”

That is not to say that PRH, or publishing as a whole, is combating censorship on every level. Indeed, it would be dangerous to assume that every good decision from publishing is part of a pattern. On 4 June, Indian website The Quint interviewed Meena Kandasamy, editor of Telugu poet Varavara Rao’s book Varavara Rao: The Revolutionary Poet. PRH, one of the leading publishers in India, ordered the removal of words like “Hindutva,” “Sangh Parivar,” and “Ayodhya” from Rao’s book, presumably as a reflection of their “fear of being slapped with sedition and defamation charges.” Kandasamy states that “as an editor, it is devastating. As a writer, it is even more heartbreaking because what happens to Varavara Rao today will happen to all of us tomorrow.”

Last December, the NCAC released a statement “on the attack on books in schools.” This was signed by a number of publishers, including the aforementioned Penguin Random House, MacMillan Publishers, Scholastic Inc., and more. Signing statements like this seems to be a common move from publishing houses, both when it concerns national and international censorship. Another example of this came on 7 June, PEN and the International Publishers Association published one such statement decrying the closing of another publishing house by the Myanmar military government. This is the third closure since they came to power through a coup on 1 February 2021.

Some publishers have statements on their websites. The Hachette Book Group (HBG) has one where it invites readers to join them “in the fight against censorship.” Accompanying it is a list of resources, including links to a National Coalition Against Censorship (NCAC) form to report censorship and to the National Council of Teachers of English (NCTE) Standing Committee Against Censorship. HBG also states that it has made emergency donations to the Authors Guild, the NCAC, and PEN America. Simon and Schuster has another such statement.

Some of the most transformative action can happen when publishing houses work together, and with other organizations like nonprofits. Unite Against Book Bans, a national initiative formed by the American Library Association, counts a number of publishers, including MacMillan Publishers, Penguin Random House, Scholastic, and Sourcebooks, as organizational partners. The initiative has put together a toolkit with the goal of arming individuals with the knowledge necessary to fight book bans, breaking the information down into sections: Talking Points, Contact Decision Makers, Grassroots Organizing, and more.

As it is, no. Publishing as an industry could certainly do more to combat the ever-rising tide of censorship in the United States. It’s telling that the majority of concrete measures are taken either by nonprofits, such as the National Coalition Against Censorship, or private individuals, like Markus Dohle.

Furthermore, when publishing houses take action, it tends to be in the form of statements and press releases — which is not, in truth, much action at all. A step in the right direction? To be sure. Enough to battle the increasingly partisan attempts to suppress voices in publishing, and limit readers’ access to information and art? No. A statement will be drowned out quickly if it goes unnacompanied by concrete action. The publishing industry needs to back up their words with other actionable measures if they want any hope at all of beating this widespread issue.

What actionable measures could publishing houses take? Well, providing resources, both financial and legal, stands at the top of the list. Teaming up with organizations dedicated to combating censorship is another. Investing in education and local journalism, in arming citizens with the knowledge and resources necessary to fight censorship in their own cities, counties, and states? That needs to be a priority.