This year, I decided to create a Book Award that was just for the high school where I work as a librarian.

It was the best decision I’ve ever made, program-wise. It’s been really fun to watch the excitement build around these books and it’s also been a great way to meet new students and teachers and get these books into the hands of both.

My goal when I started the book award, known as the Bookling after our book club, The Booklings, was to make sure the books that were nominated were under the radar kind of books that I thought appealed to both reluctant and able readers alike.

A near impossible task, but I think I pulled it off. I did not create a long-list this year because I didn’t have time. I went straight to the shortlist and chose six books I thought would have that broad appeal I was looking for.

The only rule was that the book had to have been published in 2016 to be eligible. From there, I just put the books on display and made big posters to promote them.

I knew, however, that I needed to do a lot more.

The first thing I did was to contact each author and congratulate them on being nominated. I’m very lucky because all of the authors nominated are awesome people and were very gracious and honoured to be nominated.

I wanted to build a buzz around the books so I ensured that as many students as possible interacted with the nominated authors.

Here’s what we did to celebrate with the authors:

They helped cut the ribbon to officially open our Little Free Library.

They Skyped with students ages 11 – 15 on six different occasions to promote their books and to encourage the students to vote for them!

Our students also chatted to them on Twitter to talk about writing, life and of course books. 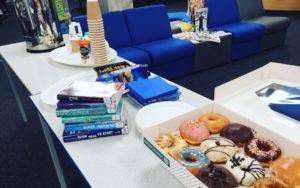 I also held a coffee morning in the library with Krispy Kreme doughnuts and of course coffee, tea and homemade brownies for teachers. While they injected large amounts of sugar into their bodies at 7:45 am in the library I book-talked all the books and did my best to get them to borrow some of them. In the end a handful of teachers did borrow the books and provided valuable feedback on them.

To top it off, I had over five hundred students vote on their favourite cover, blurb and first page of all six books using a simple Survey Monkey survey. This way, even students who hadn’t read the books could provide some feedback that I could incorporate into the award.

Students who read the book were sent another simple survey to cast their vote.

Of course, in library lesson , before school and lunch and after school I’m book-talking these books and getting them into the hands of as many students as possible. 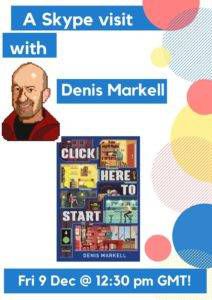 Before the big award ceremony, when we Skyped with as many of the authors as possible, the books had been borrowed over 200 times and three of them made it into the top five books of the year, circulation wise.

We circulate over 8,200 books each year so I know that this book award has worked in putting these books into the minds of students.

On Tuesday July 18th at lunch we had our trusty members of The Booklings open the envelope and reveal the winner.

Before that we had doughnuts. And chips. And cakes. And other really unhealthy food that gets teenagers more amped up than they usually are but it’s ok because we’re in the library and we’re here to have some fun.

With just a handful of votes more than Click Here to Start, Beth Garrod’s Super Awkward took the Bookling home. 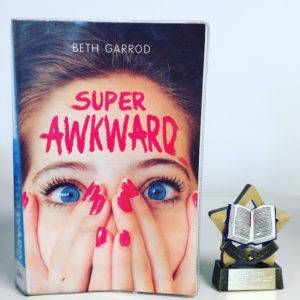 I cannot wait to launch the book award again next school year. This time, I’m going to let the students create the long list and hopefully have more in-person author visits.

I also want to share this award with other schools so more students from our area can come to the library and enjoy it.

It’s been hugely popular and fun. If you work in a school library I really hope you try one out!