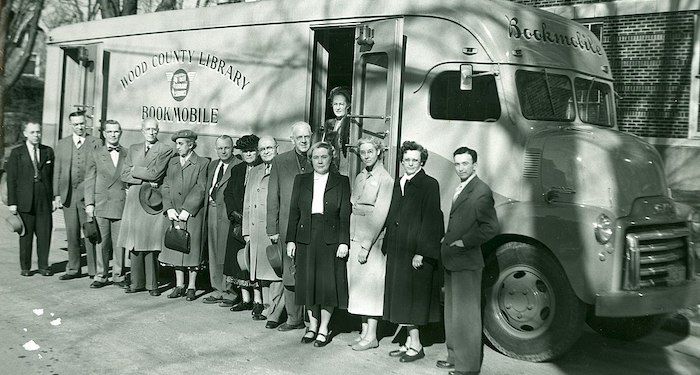 Annually, the American Library Association (ALA) sponsors National Library Week and honors bookmobiles and the librarians that drive them with their own day — Wednesday, to be exact. First celebrated in 2010, the ALA’s Office for Diversity, Literacy, and Outreach Services (ODLOS) along with the Association of Bookmobile and Outreach Services (ABOS) and Association for Rural and Small Libraries (ARSL) organized National Bookmobile Day. Recently rebranded, National Library Outreach Day “celebrates library outreach and the dedicated library professionals who are meeting their patrons where they are.”

This year, the festivities occurred on April 6, 2022. The ALA stated: “Bookmobiles and direct-delivery outreach services are, and continue to be an integral, vital part of libraries around the country. For over 100 years bookmobiles have served rural, urban, suburban and tribal areas, bringing access to information and life-long learning resources to all classes and communities.”

In 1859, a cart called the Perambulating Library, one of the earliest bookmobiles on record, rolled through the streets of Warrington, England. In 1905, bookmobiles arrived in the U.S. The first recorded traveling library popped up in Maryland. With around 50% of Washington County residing in remote areas outside of Hagerstown, librarian Mary Lemist Titcomb — determined to “serve the entire county” — designed the first: a wagon drawn by two horses, Black Beauty and Dandy. Featuring exterior bookshelves, it carried approximately 200 books.

During the 1960s, W. Ralph Eubanks, the author of, most recently, A Place Like Mississippi: A Journey Through a Real and Imagined Literary Landscape, remembers bookmobiles stopping on his street in southern Mississippi: “The librarians did not care that I was barefoot, and wearing a pair of raggedy shorts. All they cared about was that I wanted to read — and to help me find something I would enjoy reading.” One summer, Eubanks, on the cusp of 11 years old, discovered William Faulkner on the shelves. Turning the pages of The Reivers marked his first time reading an author from Mississippi. For young Eubanks, reading the novel was the “first hint that someone from my part of the world could also become a writer.”

Across the state of Washington in the 1960s, Storm Reyes was raised in migrant labor camps. The 12-year-old, who had yet to own a book, skeptically entered a bookmobile for the first time and left with an armful of titles, “devoured them,” and returned two weeks later. Reyes states, at 15, “I had read about people like me and not like me. I had seen how huge the world was, and it gave me the courage to leave.” Eventually, Reyes became a Pierce County librarian and worked there for over 30 years.

In the 1990s, bookmobiles experienced another “heyday.” In 1991, 1,125 navigated the U.S. The number declined until 2015 with a low of 647 bookmobiles. According to 2019’s Public Libraries Survey report by the Institute of Museum and Library Services, around 6% of public libraries operated “one or more” bookmobiles, and 671 bookmobiles offered library services throughout the U.S. With their presence rising, does this signal, as predicted elsewhere, a “renaissance”?

In addition to stocking the shelves with books, which is magical in and of itself, some library bookmobiles carry DVDs, games, magazines, and music, too. At some, you can request specific titles for pick-up, hot spots, technology, and more.

When someone thinks of bookmobiles, their mind might veer to their most popular forms: small buses, trucks, and vans, but mobile libraries traverse the world in different ways. When Roshan of the Camel Library project visits villages in Pakistan, kids exclaim, “the camel is here!” In Sweden, bokbåten, Stockholm county’s floating library, ferries approximately 3,000 books and up to several librarians. Established in 1953, the boat voyages to 23 different islands. Since 1997, Luis Soriano, a former schoolteacher from La Gloria, has traveled the Colombian countryside on donkeys to bring books to students. With wood bookcases attached to Alfa and Beto’s saddles, the “Biblioburro” has grown from 70 books to over 7,000 and from one traveling library to almost 20. Knowing all of this is possible, I am currently daydreaming of a poetry sleigh pulled by unicorns.

An interesting example of how bookmobiles keep evolving is OverDrive’s Digital Bookmobile. A free service available to its library and school partners in the U.S. and Canada, the Digital Bookmobile shows readers across age groups how to access and navigate their library’s digital collections.

Today, libraries aren’t the only folks managing bookmobiles. In Crozet, Virginia, Flannery Buchanan runs Bluebird Bookstop, a woman-owned mobile bookstore, out of a charming “vintage camper.” In 2015, OlaRonke Akinmowo founded the Free Black Women’s Library. Mobile but based in Brooklyn, the “social art project, interactive installation and book collection that celebrates the brilliance, diversity and imagination of Black women writers” consists of 5,000 books by Black women.

In case you caught the bookmobile bug and hope to begin your own, it costs, by the ABOS’s calculations, $200,000. In “How To Start A Bookmobile,” Emily Stochl talks to Hilary Atleo of Iron Dog Books. Inspired by the popularity of food trucks, Atleo established the Indigenous-owned mobile bookshop in Vancouver, which sells new and previously owned books, with her husband, Cliff.

Please don’t sleep on perusing the links in this post to gaze at some cool photographs of bookmobiles, new and old. If you would like to read more, check out the photographic history of bookmobiles in the U.S., books about mobile libraries, and unique libraries of the world.