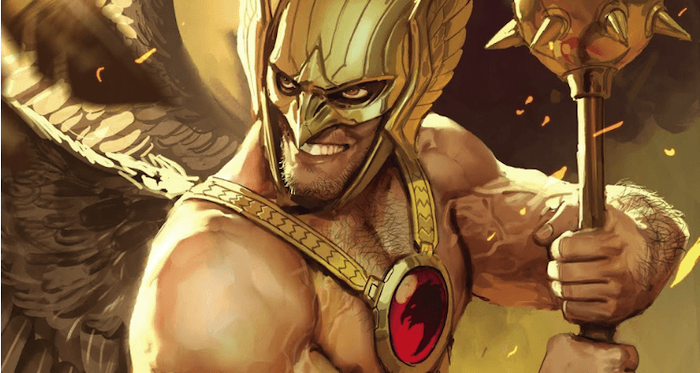 Recently, The Hollywood Reporter broke the news that Aldis Hodge will be playing Hawkman in the very, very long-awaited Black Adam movie starring Dwayne Johnson as the title character. Hawkman has been a staple of the DC universe for 80 years, so I figured I’d take a minute to sit down and explain his whole deal to you.

Sorry about that. It’s just that Hawkman (and his frequent partner, Hawkgirl/Hawkwoman) is infamous for having one of the most convoluted, incomprehensible, and frankly error-filled histories in comics, rivaled only by Donna Troy. But because I love you guys, we’re going to try.

Deep breaths, everyone. We’re going in.

Hawkman debuted in Flash Comics #1 (January 1940) and was created by Gardner Fox and Dennis Neville. He was originally Carter Hall, an archaeologist and museum curator who discovered that he was in fact the reincarnation of the ancient Egyptian prince Khufu. He also discovered the gravity-defying “ninth metal” (later changed to “Nth metal”) and used it to fly, with a pair of wings to help guide him. (How did he flap them? Shhh.) Naturally, he became a crimefighter, using the ancient weapons in the museum where he worked (Carter, NO) to fight the usual gangsters and Nazi saboteurs of the Golden Age (Carter, yes!).

Also appearing in Flash Comics #1 was a woman named Shiera Sanders, who turned out to be Carter/Khufu’s reincarnated lover, Princess Shiera (later changed to Princess Chay-Ara). Carter and Shiera began dating, and within a year and a half she had donned a costume and wings as Hawkgirl. They both fought crime alongside the Justice Society of America, and eventually got married.

After the war, though, superheroes were no longer as popular as they had been, and all but the biggest (Superman, etc.) disappeared from the newsstands. Hawkman’s last Golden Age appearance was in 1951.

However, by the end of the decade, superheroes were regaining popularity, and DC had come up with a very effective way to capitalize on this returning trend: dust off their old IP and give them snazzier costumes and more modern secret identities. And thus in 1961, a full decade after they’d disappeared, Hawkman and Hawkgirl returned to comics, but with a radical makeover. It was the Space Age, after all! Archaeologists were out and astronauts were in!

And so in The Brave and the Bold #34 we met Katar and Shayera Hol, police officers from the planet Thanagar who had come to Earth to study our policing techniques (yikes), and used the names “Carter and Shiera Hall” as their secret identities. For some reason they still dressed like Earth birds and fought with ancient Earth weapons. Katar was also somehow a Republican (a space Republican!), which…yeah.

Katar joined the Justice League, but Shayera was not permitted to, due to a random rule that only one new member could be admitted at once. She was at other times denied admission due to an arbitrary 12-member cap, or because two members couldn’t have the same power set. She also had to work as Katar’s secretary in his secret identity even though they had the same job on Thanagar. Shayera is like a microcosm of gender discrimination in the workplace disguised as coincidentally unfortunate policies that, gee gosh, the men would like to change but they just can’t, because reasons! However, she did at least finally get to change her name to Hawkwoman in 1981.

Then came 1985’s Crisis on Infinite Earths, which merged all of DC’s alternate worlds into one. This meant that all the Hawkpeople had existed in the same universe all along, with Carter and Shiera active during World War II, and Katar and Shayera active currently. Also fine and groovy! Especially after DC decided that having the Justice Society kicking around in the same universe as the Justice League was redundant, so they sent the JSA, including the Halls, off to wage an endless battle in Limbo, leaving a single pair of Hawkpeople on Earth.

The problem came with the 1989 Hawkworld miniseries by Timothy Truman. This was a retelling of Katar and Shayera’s origins, updating them for this new, post-Crisis universe. It was extremely popular and sold well, so DC decided to make it an ongoing series, covering Katar and Shayera’s arrival on Earth.

However, Hawkworld was always intended to be a prequel, but DC editorial insisted that it be shoehorned into current continuity, meaning that Katar and Shayera were new to Earth as of 1989. This created a problem, because there was already a Hawkman and Hawkwoman operating on Earth—they’d been members of the 1980s Justice League International and everything. So if they weren’t Carter and Shiera (who were in Limbo) and they weren’t Katar and Shayera (who had just arrived on Earth), who the hell were they?

Uh, said DC. Crap, said DC. Why, that Hawkman was actually Fel Andar, a human/Thanagarian hybrid who was spying on Earth for Thanagar! And pretending to be the son of Carter Hall, who was still stuck in Limbo! And that Hawkwoman was his innocent human wife, Sharon Parker, who he had brainwashed into being his crimefighting partner for…some reason! (She eventually remembered the truth and exposed her husband to the Justice League, at which point he murdered her and fled back to Thanagar.)

Oh, no. You didn’t think it would be that easy, did you?

In 1994, DC published Zero Hour: Crisis in Time!, a company-wide crossover meant to smooth out some of the continuity wrinkles left by Crisis on Infinite Earths. One of the more bizarre solutions they came up with was to merge a bunch of the existing Hawkpeople—both Carter and Shiera Hall, back from Limbo, as well as Katar Hol, still relatively new to Earth—into a single “Hawkgod.” Because that definitely makes way more sense. Totally.

DC seems to have immediately realized that the Hawkgod situation just made things much worse, because they promptly put Hawkman in the time out corner until someone could figure out what the hell to do with him. He stayed there for most of the rest of the ’90s, while being briefly replaced on the Justice League with an actual literal angel named Zauriel to fill that all-important “guy with wings” slot. Even though almost everyone else on the team could fly already. Whatever!

Finally, in 1999, DC took another stab at sorting out the whole Hawk…thing. Remember how Carter was a reincarnated Egyptian prince, way back in the beginning? Well, it turns out he’s been reincarnated over and over again throughout the centuries, starting with Prince Khufu, ending with Carter, and with a number of obscure DC historical characters (as well as John Smith of Pocahontas legend fame for some reason, which…gross) in between. Also, Prince Khufu totally randomly met some Thanagarian visitors back in ancient Egypt times, thus linking the two disparate Hawk mythologies from the very beginning. (You know who else was there during that meeting? Black Adam! Hey, this is all coming together! Uh. Sort of.)

Long story short (ha!), Carter’s entire history as we’ve seen it unfold is all still true, up through merging with Shiera and Katar as the Hawkgod. Except the Hawkgod wasn’t a Hawkgod, but a Hawk avatar, an aspect of the Red, which is the interconnected web of animal life on Earth that Animal Man draws his powers from, obviously. This Hawkgod/Hawk avatar being was eventually banished to Limbo for the crime of being too confusing, as we know, and this effectively counted as Carter dying.

That meant that he could once again be reincarnated, which happened on Thanagar because why not? And because he was reincarnated on Thanagar, he returned as an adult, with all the memories of his past lives intact as well as those of Katar Hol because they’d once shared a body. Sure!

Unfortunately for Carter, Shiera’s path was a little different. At this point, there was already a new Hawkgirl: Kendra Saunders, Shiera’s great-niece. Sort of. See, the real Kendra had died by suicide, and Shiera’s soul, which I guess was just wandering around loose after the death of the Hawkgod/avatar, took over her body. However, she awoke with Kendra’s memories and not Shiera’s.

Thus, when Carter was resurrected, he immediately clocked Kendra as his reincarnated soulmate, while she was like “Who is this hairy shirtless guy who keeps saying I’m his wife?” Whether this makes their story a tragic romance across the ages or a creepy tale of a middle aged white guy insisting to a much younger, mentally ill woman of color (Kendra is Latina) that she belongs to him is up to you, I guess! Either way, they eventually tentatively rekindled their romance, while having various Thanagarian adventures despite neither of them being actually Thanagarian anymore.

But whenever the Hawks become reasonably comprehensible, DC immediately reboots their entire universe, and thus it was with the New 52 reboot in 2011. Suddenly, ancient Egyptians were out again, and Thanagarians were in, with Katar Hol and Shayera Thal (her maiden name) returning—except this time, Katar incorrectly believed himself to be a human named Carter Hall, and Shayera was a princess of Thanagar.

The Thanagarian versions were maintained through the 2016 Rebirth reboot, but Katar died a year later in a battle with the villain Despero. Then in 2018, Carter Hall returned again as an archaeologist/reincarnated Egyptian prince, and it was established that Katar was one of his prior lives even though they had both been alive at the same time. Sure. Fine. Whatever. I HAVE STOPPED CARING. WE HAVE ALL STOPPED CARING. DOES HE FLY AROUND WITHOUT A SHIRT AND HIT THINGS WITH A MACE? GREAT.

So where are we now? Hawkman is Carter Hall, and Katar is dead/one of his past lives; his current solo series was recently canceled and the final issue will be out in November. Meanwhile, Hawkgirl is Kendra Saunders, currently appearing regularly as a member of the Justice League and the reincarnation of the ancient princess Chay-Ara, but Shayera Thol is still definitely totally alive despite also somehow being Kendra’s past life, and rules Thanagar. Good for her! Hawkgirl is ten thousand times more rad than Hawkman, so I’m very okay with two contemporaneous versions, inexplicable as they may be.

Finally, here are some miscellaneous Hawkman facts to wow (?) your friends and family with:

Black Adam has ties to both ancient Egypt and the Justice Society, so I think it’s safe to say that we can expect Aldis Hodge to be playing the Carter Hall version of the character. He’ll be joining Noah Centineo as Atom Smasher; Doctor Fate and Cyclone will also be appearing. (I vote for the Khalid Nassour version of Fate!) Presumably the movie won’t get into any of this mishegas I’ve just outlined, which is probably for the best. I expect Aldis Hodge to be shirtless and short-tempered and carry a mace, and that’s Hawkman enough for my liking! The rest of it is just a migraine waiting to happen.

In conclusion, Hawkman is a mess but Aldis Hodge is great, and I am excited to see him in the role. He might actually make Hawkman almost as cool as Hawkgirl!

No, but seriously: they’re putting Hawkgirl in this movie, right?