Like many American high schoolers, I was primarily introduced to “the classics” in the classroom. We read mostly (dry, old, dead) white men: George Orwell, Charles Dickens, William Shakespeare, Aldous Huxley, Dylan Thomas, Nathaniel Hawthorne, Percy Bysshe Shelley—you get the idea. Outside of the novels I had the authority to choose for assignments (The Painted Drum by Louise Erdrich and Persuasion by Jane Austen, if you’re wondering), the most memorable piece of literature I read was Hamlet.

There’s an argument to be made that plays should not be read, but rather experienced only via the stage. Be that as it may, I was not the teacher and the teacher said “Read,” and thus we read. And watched the Branagh adaptation (which I promptly went out and purchased myself, being 17 and enamored of the disturbed and emotional Prince of Denmark). No other material had quite the lasting effect on me that Hamlet did and, while Branagh (for all his faults) was certainly dashing in the film, I don’t think that’s why I was and continue to be so taken by the play. 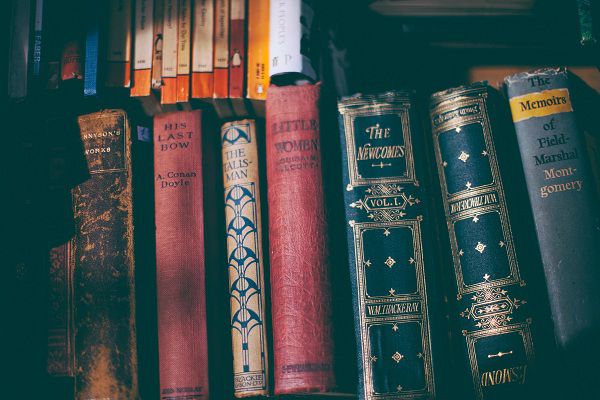 Instead, I think the difference between Hamlet and arguably more accessible works like Animal Farm was that I was pre-introduced to Hamlet in middle school.

I wish I could remember the exact source, but all I can recall is that my 7th grade class read aloud a heavily-illustrated and abbreviated version of Hamlet. For a few days of a week, students took turns playing at the roles of Horatio, Claudius, Polonius, and so on. The bones of the play were printed on cheap, plasticky magazine paper in quarter size and we flipped through them together in our lines of desks while our Language Arts teacher sat on a stool at the head of the classroom. A lot of the reading still went over my head, despite modernized language and the relative brevity. But that I could then leave the classroom and tell an adult I had read it (they didn’t need to know there was a qualitative “more or less”) was important to me. I felt accomplished and impressive, as one often does, having read Shakespeare.

More importantly, however, was that the seeds of Hamlet had been planted in my brain. I may not have absorbed most of it, but I got the basics. Those basics ended up being an excellent foundation for my first real reading of it roughly five years later as a senior in high school. As a teen, I didn’t have to focus my energy on figuring out the basics of the plot: I already had that down from my “first reading.” With that foundation firmly in place, I could pivot to pieces more important to the high school reading experience of Hamlet, like themes and other literary elements.

So why don’t we do this more commonly? If “the classics” are as important as we seem to think they are as an education system, why don’t we make them more accessible by laying down the foundations for them earlier? Spending an hour in a children’s department at a library will quickly prove to you that graphic novel is king—the format seems to be more digestible and certainly more exciting for young readers—so it follows that we ought to share the classics earlier in these formats and reintroduce them in full later on, particularly if we have determined that plot comprehension is a necessary part of interacting with a piece of literature in an academic setting.

As far as Shakespeare goes, if we are in fact “doing it wrong” by reading in the first place rather than seeing it performed, then why not be really “wrong” and read a given play as a graphic novel? An effective English teacher can say all they want about the abundant crude jokes Shakespeare throws about and how his writing is of the people, for the people—but the reality is, the sentence structure alone makes the stories inaccessible for many modern readers. If a graphic adaptation—and therefore accompanying images that give context clues—make the work more digestible, why don’t we push it?

And, sure, some may say the themes, scenes, and general content of many classic works are not appropriate for children. To this, I’d remind you that the version of Hamlet I read in seventh grade was abridged and conveniently left what was appropriate for its audience, working around what wasn’t or otherwise representing it in a way that was sensible for the average middle schooler. I’d also say that you’re probably underestimating kids.

Plenty of classics have already been adapted as graphic novels and certainly, with the popularity of such reimaginings as Meg, Jo, Beth, and Amy and other for-kids graphic takes on the classics, more are coming. Let’s get over the stigma of graphic novels and use them as a teaching tool in and out of the classroom. If it leads to a deeper understanding of more advanced literature in the future, huzzah! And if not, well, a good story is a good story and one format no more valuable than the other.