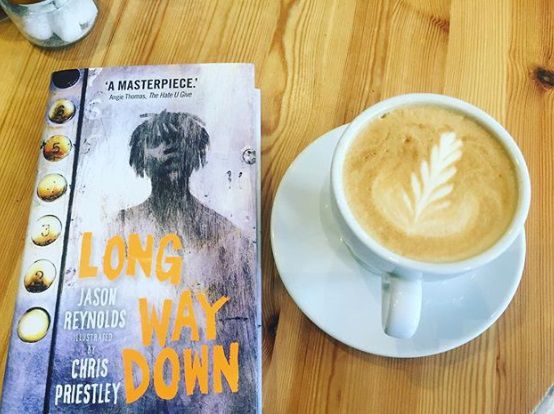 If you’re a librarian or educator of young people, you will undoubtedly have heard about the challenges of getting boys to read, or keep reading after they reach a certain age.

It’s a big problem, and a research study conducted by the University of Dundee in 2016 studied over 850,000 boys’ reading habits between the ages of 5 and 18 and unveiled these results:

At the school where I work, we are looking closely at boys’ reading habits to ensure they don’t fall behind.

I was asked to choose a book that boys in Year 9 (Grade 8) might enjoy reading together and discussing with members of staff who will read it with them.

I looked a lot of books but in the end I chose Long Way Down by Jason Reynolds.

Written in prose, it tells the story of Will, whose brother Shawn gets gunned down in a gang related retaliation war. Will takes his brother’s gun from his dresser, gets in an elevator and makes his way to the bottom floor to shoot the boy who murdered his brother.

On his way down, though, strange things begin to happen.

The entire novel spans only 1 minute and 7 seconds but will stick with you for a lifetime, I can guarantee you that.

On the day I was to launch the book club, with over 30 boys and seven members of the senior leadership team including the head teacher in the audience, I was pretty nervous.

I had no idea if the boys would take to this novel. They had all been identified as boys who aren’t challenging themselves, who say they don’t like to read or hate reading or who teachers tell me stare blankly at the pages and pretend to read when given the task in their class.

I started out by playing a YouTube clip of Jason Reynolds reading the first few pages of Long Way Down. I then discussed gun violence and violent crime in general, as it is way up in London in 2018, especially amongst youth. 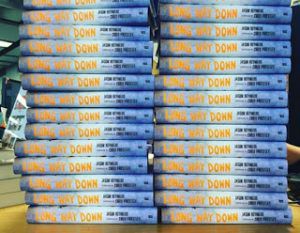 I then gave everyone in the room a copy of the book and we spent five minutes reading it before the bell went. I asked the students to get to page 65 by the next week. I thought it would be a good target because it’s a very sparse book that you can really fly through yet packs such a punch I knew that there would be tons to talk about.

That was a 8:30 in the morning. During our first break at 10:55, one of the boys ducked into the Library. “I’ve read to page 85!” he yelled, holding the book up triumphantly.

“Love it!” he exclaimed and my heart filled up.

By the end of break three more boys had come to the Library to tell me they’d read past the required 65 pages.

“Keep reading,” I said. “Don’t listen to my page restriction.”

A day later a large group of boys came into the Library, they were loud and boisterous and I approached them to ask them to keep it down until I realised they were talking about freaking Long Way Down!

The next week we had our next meeting. All of the boys in my group had finished the book.

“This guy writes like my brain works,” said another boy.

“I mean, even though he’s got all of this stuff going on around him, his brother getting murdered and everything, his brain is still going all over the place. That’s like me, my brain goes all the time, it doesn’t stop. This book goes just like that.”

Another boy said that he read the whole thing in one day because it was impossible not to know what happens at the end.

It was an amazing time sitting down with these boys to discuss the book. They have all connected with it and all feel something from it. I’m not saying that Long Way Down is a magic pill that will make all boys read more and be more engaged; there’s a ton more work to do and a lot of research to digest, but man, this feels like a step in the right direction.

Looking for more tips on getting boys to read? Try 20 YA Books for Older Teen Reluctant Readers.