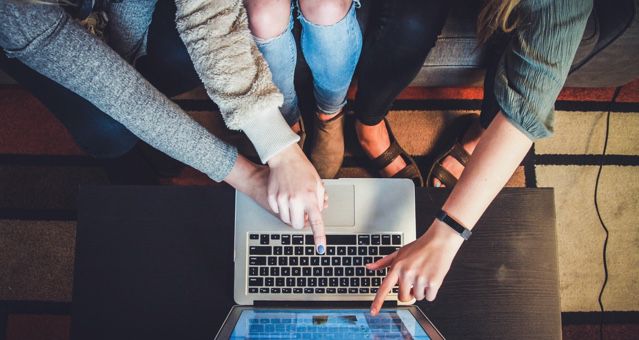 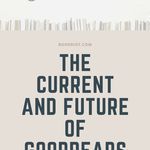 I’ve always been a numbers gal. Don’t get me wrong, I was never a math whiz, but I can’t resist creating lists and following my progress in a numerical fashion. Even as a slow reader, I get a kick out of tracking the books I read throughout the year on Goodreads. It’s a helpful motivator, and it’s the ideal way to refresh my abysmal memory when asked about my recent favorite reads. I rarely know off the top of my head, and my Goodreads list is always there to save me.

Goodreads was born a little over a decade ago, in December 2006. Soon after its launch, the site’s membership grew exponentially. It quickly racked up over half a million users by the end of 2007. User numbers kept on growing, and the popular site for book readers caught the eye of Amazon in 2013. At the time, readers (and writers) were wary of the purchase, though some did feel positive about the move. As noted in a 2013 piece published on The Guardian’s website, author Hugh Howey admitted that while the move made some anxious, he also saw the potential for good in the acquisition.

Fast forward to early 2019. Goodreads now has a companion smartphone app, but the site still looks much the same as it once did. Otis Chandler and Elizabeth, Khuri Chandler, the founders of the site, stepped down as CEO and Editor-in-Chief earlier this year and  Veronica Moss—previously the Revenue & Operations Officer for Goodreads—took over as CEO. In a statement released earlier this year, Otis & Elizabeth stated that they “remain incredibly excited about the future of Goodreads.”

I was interested in finding out whether there was a future for a platform that feels so outdated and archaic in terms of design and functionality, so I set about to speak to users to hear out about their thoughts and experiences. I also got in touch with Goodreads to inquire about future plans for the site.

What’s Not Working According to Goodreads Users

There are no two ways around it, Goodreads is due for an update. The website needs a visual refresh—the color palette and design feel incredibly outdated. I almost feel nostalgic when I logon because it feels like a website I might have perused in the early 2000s as a kid in computer class. And that’s because that’s what it is. The site has changed minimally over the years. Books are added every day to the platform, but the shell hasn’t grown or evolved as quickly as its user base.

A peek at the site via the Wayback Machine shows that the platform of old looks shockingly similar to that of today. 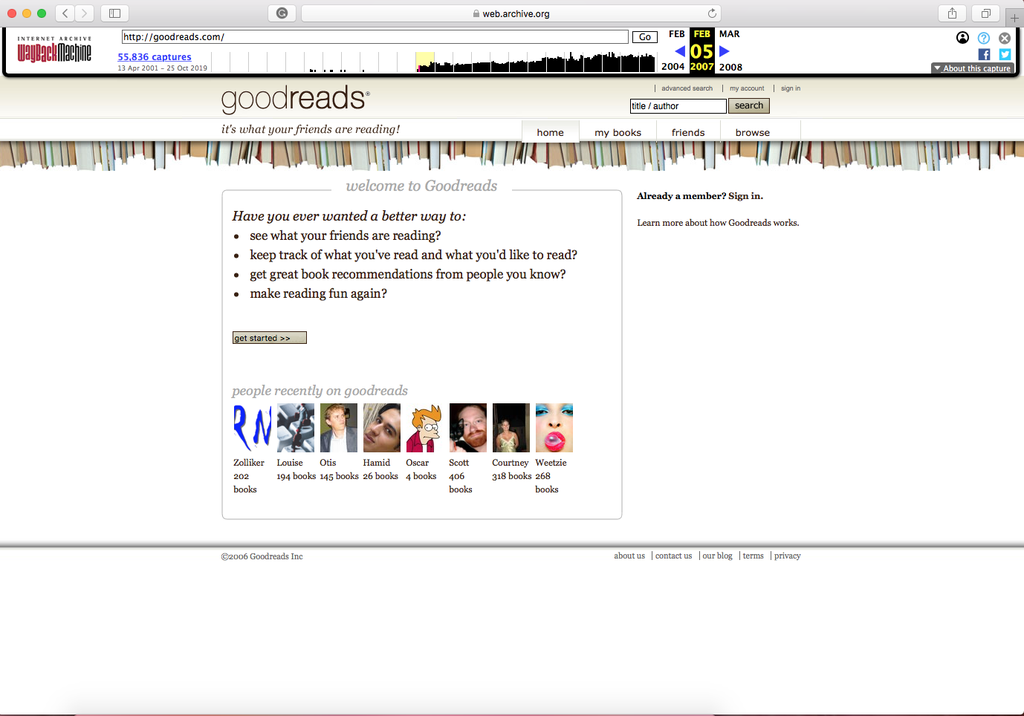 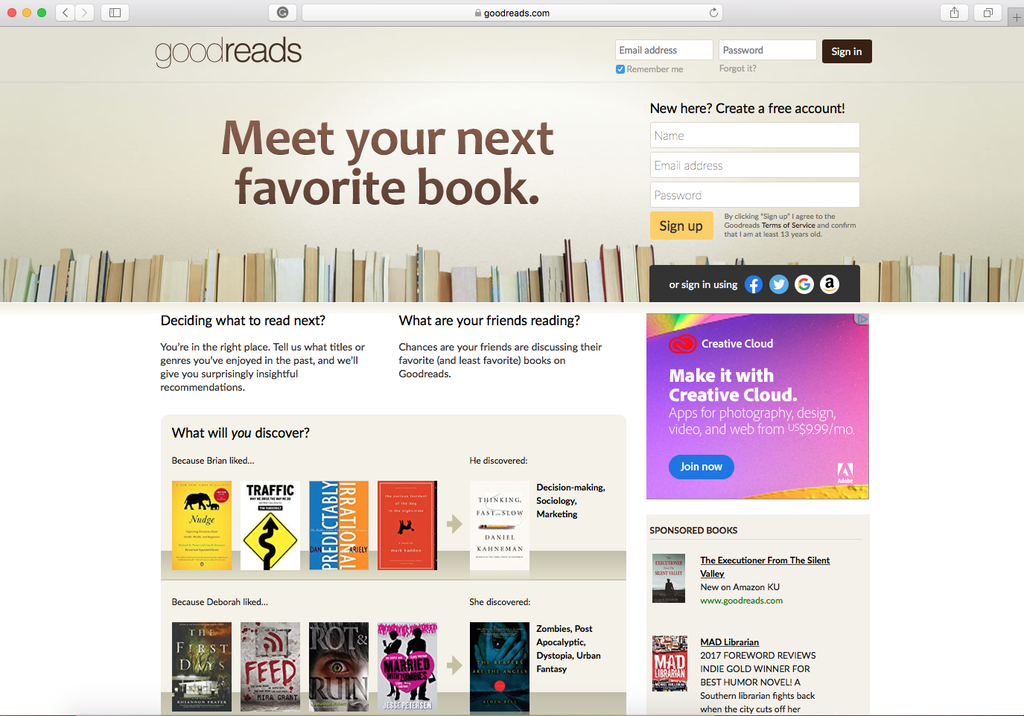 I asked fellow readers and members of two online book clubs about their Goodreads experiences via social media. In the end, I received the opinions and observations of nearly a hundred readers who all echoed similar complaints but who were also often vehement about their love of the platform.

What’s not working for current users? According to those who shared their thoughts, most of whom have been users for at least two years, some of the biggest letdowns included:

It’s surprising that a platform owned by Amazon has such terrible search functionality. If you’re only vaguely certain of the book title, you’re looking for? Good luck.

Search is a joke. You have to type in the whole title in its entirety and even then it’s not usually one of the top results. Or when you’re searching and as you type more letters of the title to be more specific, the book you’re looking for disappears from the drop down options. —Laurel Kenneweg, a Goodreads user who has used the platform for at least nine years

The app is terrible.

I’m not a user of the app, but a significant amount of people I spoke to were adamant that the app is functionally inferior to the website. Users also pointed out to me that iOS and Android apps don’t have the same features.

I hate the app but love the website
—Stephanie Robertson Oliver

This was a common complaint amongst those who have been using the platform for a long time.

In terms of functionality, speed, ease of use, and even looks, their platform is slower and way behind the others. —Alison Morrow, a Goodreads user for over eight years

Poor integration with other Amazon services.

Oddly, Goodreads fails miserably when it comes to integrating with services like Audible and Amazon. The Kindle integration is pretty stellar, but readers told me that they find it strange that there’s seemingly very little feedback going on between Amazon and Goodreads. Book recommendations on Amazon don’t seem to line up with a user’s Goodreads activity, for example.

I feel like if Amazon is going to take the trouble to track everything we do, it should make better use of the information.
—Sibyl Marshall

One of the reasons I love Goodreads is because it’s like a handy digital bookshelf. I don’t have a lot of room for shelving in my home, so I’ve primarily become a digital reader. I love being able to categorize and sort my books on an imaginary shelf. The problem is that there are limitations to the Goodreads system. There’s no DNF shelf, which lots of readers felt was a significant omission. There are workarounds, of course, but adding books to an exclusive user-created DNF shelf still automatically counts them towards your yearly challenge. 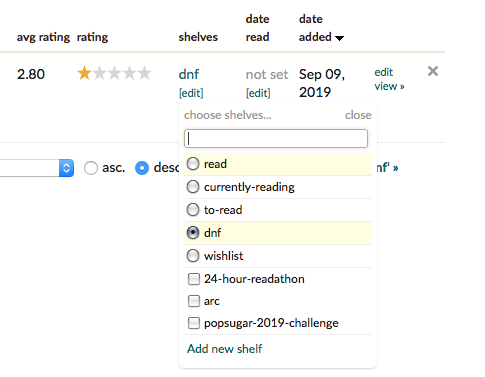 It’s possible to manually add a DNF shelf, but books added there still count towards your yearly reading goal unless manually removed.

The groups function of Goodreads is incredibly retro. The message board–like area of the site where people can chat with like-minded readers needs an update of its own. For a site that focuses a lot on the social aspect of reading, it makes it markedly difficult to engage with other readers. 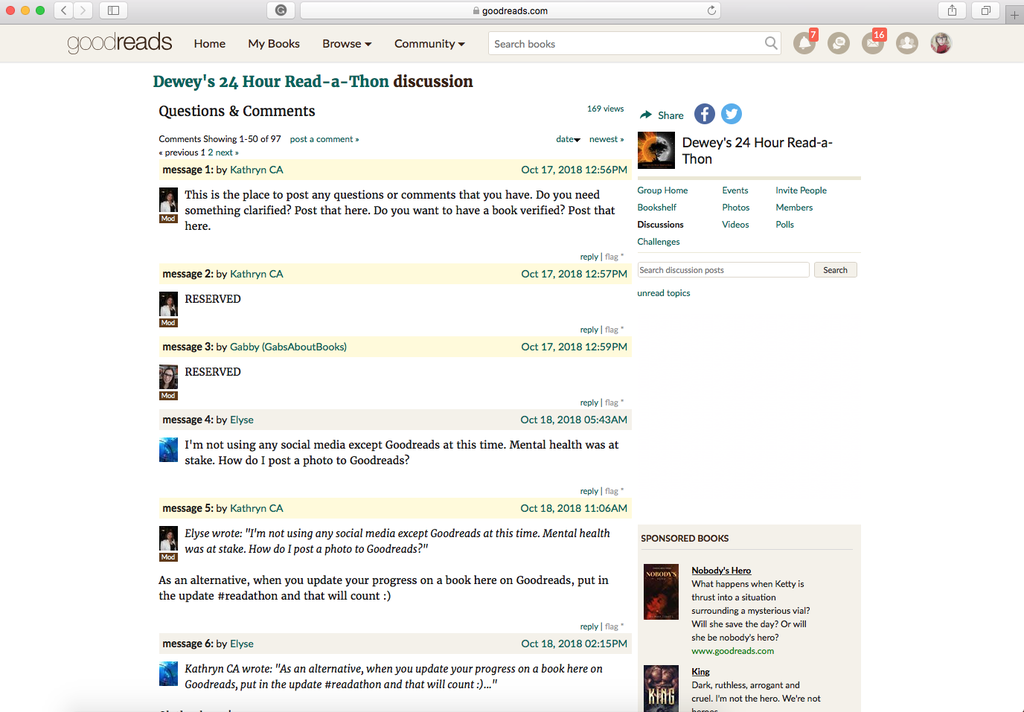 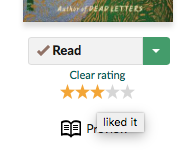 No ability for half-star ratings.

Perhaps the biggest complaint of all from users was the cry for a better rating system. Rating anything from one to five is difficult, I’m always struggling to decide on the best and most fair rating for the books I read, and the limitations of the Goodreads star-system make rating reads that much more challenging. There’s a difference between a 3-star book and a 3.5-star book, and the readers I polled felt the same way.

What People Love About Goodreads

That’s not to say the platform is doomed and that users are looking for a way out. There’s a lot to love about Goodreads. It’s why the people who shared their thoughts have been on the platform for a decade or more aren’t looking to migrate to something shiny and new. There’s a comfortable familiarity and a lot to like. 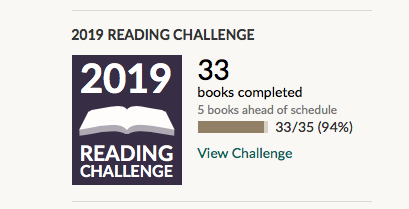 People love the yearly reading challenge. I myself credit the Goodreads challenge (in addition to the 24-Hour Readathon) for my renewed love of reading. Every year, I challenge myself a little more and feel motivated to gobble up books at a faster speed when the sidebar box tells me I’m behind on my goal.

Folks also enjoy seeing what their friends are reading and what they think of those books. Many users enjoy using GR as a tracking tool. The platform also has excellent integration with Kindle, and although the search needs work, it’s easy to scan and find books using barcodes.

What does the future hold for Goodreads?

In the midst of communicating with frustrated and conflicted users, I decided to contact Goodreads directly to find out about their plans for the platform.

Goodreads CEO, Veronica Moss assured me that the company has heard the feedback from users and agrees that there’s a need for improvement. She also highlighted some of the recent feature implementations of note, including Kindle integration and the ability for users to view notes and annotations from authors.

While she wouldn’t comment specifically about other features in the works—yes, I asked about half stars; for the love of everything book-related, give us the half stars—she did say that “[users] can expect to see updates across the board.” She was mum on which updates were in progress but wanted to assure the Goodreads community that improvements are actively being worked on and that there are additional planned improvements on the docket.

If Goodreads has you pulling your hair, I wouldn’t recommend abandoning the platform anytime soon. I’m excited to see what’s on the horizon, but if you’re seeking an alternative or looking for a book-related site with a specific functionality, here are a few options to consider:

Use an excel or Google sheet to plan and log your reading. There are many surprisingly detailed user-created sheets available online.

Whether you’re a bullet-journal aficionado or prefer a premade option, a notebook of sorts is a great analog way to track reading.

Calibre is an open-source software designed for cataloging and organizing ebooks.

The LibraryThing website is a social book cataloging website. In addition to books, users can catalog other types of media, including movies and music.

The smartphone application allows users to keep a running list of the books they’ve read and want to read.

Booknshelf is another open-source website that’s very similar to Goodreads and allows users to log and track their books.

If you’re looking for somewhere to find reliable reviews, BookBrowse is a viable alternative to Goodreads. Users can access book reviews, interviews with authors, and other book-related content.

If you gravitate towards books recommended by the world’s successful tastemakers, Bookicious might be for you.

What Should I Read Next?

Type in the name of a book or author you love and instantly receive recommendations for suggestions of what to read next.

Markedly similar to Goodreads, Booklikes was a popular choice for former Goodreads members who left the platform shortly after the Amazon acquisition.

If you’re merely interested in cataloging your home library, try out the Libib website and companion app.