Here at the Riot, we’ve written more than a few posts on some of the coolest bookish projects that we’ve come across in our perusal of Kickstarter. We’ve even made use of Kickstarter a couple of times ourselves.  With each of the round-ups that I’ve tackled, I’ve tried to make an effort to back at least one of the projects that I choose to spotlight, even though I don’t always get to give as much as I would like.

People are always curious about how many of those projects actually get funded, and of the projects that are funded, they wonder how many actually come to fruition. In my experience, they all do. Eventually.

The first Kickstarter project that I backed was an animated adaptation of a Neil Gaiman short story, “The Price.”  Nearly four years later, it’s still in production.  So yeah, there’s no finished movie yet. There are detailed updates on how the film is being produced and glimpses of the progress that has been made. They also made a point of sending out all the backer rewards that didn’t involve a finished copy of the film. I have faith that it will be finished. Other projects have had more immediate results. 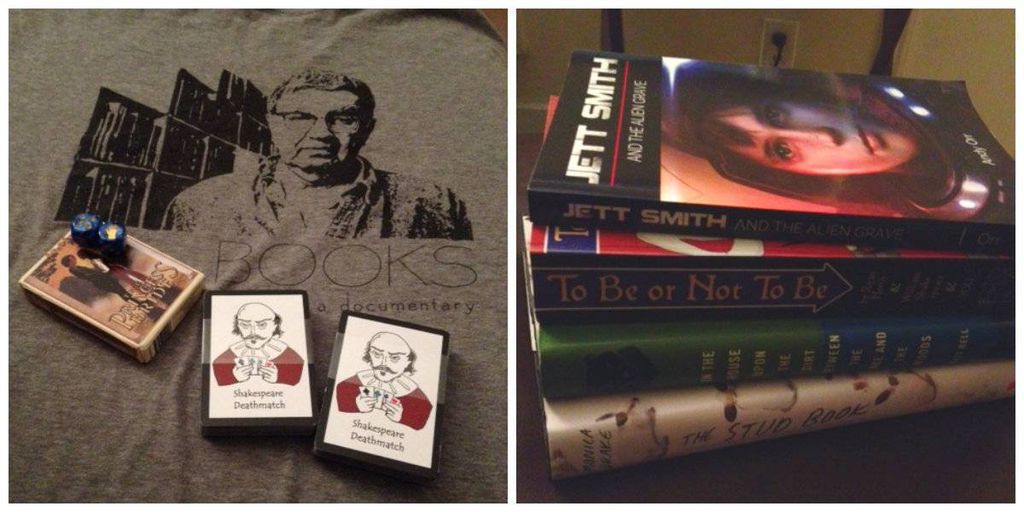 I was a backer for a documentary about Larry McMurtry and his massive book collection. It’s still in production, but close to being finished. I backed a project that produced decks of cards with art from The Princess Bride, one of the best book-to-movie adaptations ever made. There are even dice with the glove of the six-fingered man. They did a second project, too, with cards for The Wizard of Oz. There was another great project that I got behind because it was created by a couple of teachers – a card game called Shakespeare Deathmatch. I haven’t had a chance to play my copy yet, but there’s a game night on the horizon.

I’ve been a big believer in the work that Red 14 Films does, making book trailers that are more like short films based on books. I’m always impressed with the quality, even when it means that I’m disappointed when there isn’t an actual movie that I can go see. With this Kickstarter project, they funded the creation of four trailers, including one for Monica Drake’s The Stud Book and Matt Bell’s In the House Upon the Dirt Between the Woods and the Lake.

Most actual publishing projects don’t fare quite as well. Even if they get funded, it’s down to the wire. Some books, though, make it through. One young adult sci fi novel that sounded really appealing to me was Jett Smith and The Alien Grave, and I was super-pleased when it squeaked by with the necessary funding.

I was not the only one who thought Ryan North’s To Be or Not To Be was going to be something special. It’s a choose-your-own adventure take on Hamlet, and it’s pretty amazing.  At the time, it was the most successful publishing Kickstarter ever.  Its success, however, pales in comparison to that of the Reading Rainbow reboot. Backers supported that project to the tune of $5 million, more than 5 times what they were going for. Who says books are dead?

The answer to the question “does Kickstarter really work?” then is – YES. It does work, and it does so in a big way. The impact on the book world has been as large as in other industries, but that looks to be slowly changing. The beauty of these projects is that people get to have a say in what is created. If they want something that the mainstream won’t give them, they have a way to make it a reality.  That’s how Sherlock fanfiction becomes a webseries.

Have you backed any cool Kickstarters? Were you happy with the results?