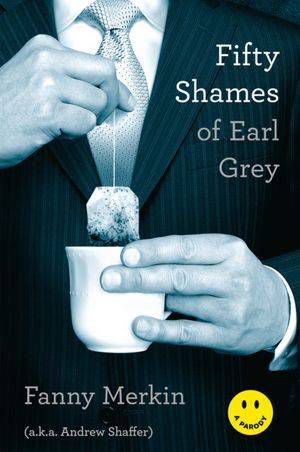 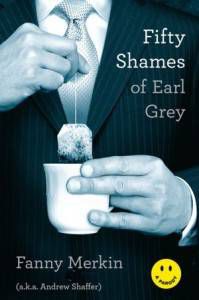 If imitation is the sincerest form of flattery, then parody is the sincerest form of mockery. That’s especially true when it’s done with wit and cleverness…and tons of penis euphemisms. Look, we all know Fifty Shades of Grey is hilarious on its own — I mean, the overriding reason we, Rebecca Joines Schinsky and Greg Zimmerman, read it was to make fun of it. Well, we wanted to earn the right to have an opinion about it. But mostly to make fun of it. (Part 1 of the post in which we have a ball ripping it apart is here. Part 2 is here.)

And so, enter Fanny Merkin’s Fifty Shades parody, Fifty Shames of Earl Grey: taking the making-fun to another level of, er, funniness. Our hero, Earl Grey (aka Edward Cullen, aka Christian Grey), is a long-fingered, Tom Cruise-obsessed, Nickelback-listening, possibly-closeted-homosexual corporate playboy. And he means to corrupt the heretofore innocent Anna Steal. What’ll happen?!

RJS: Greg, I’m so glad you agreed to read this with me. After I put you through Fifty Shades of Grey, and then didn’t share your raving about The Art of Fielding, I was a little afraid we were going to have a collaborators’ break-up. But we are apparently bonded by our twisted senses of humor, and for that, I am thankful. And that’s why I wanted to read this with you — so much of the comedy in Fifty Shades of Grey was unintentional, and I just couldn’t imagine that it wouldn’t be great fun to read something that not only brought all of that out but also added a layer to the social conversation about this undeniable phenomenon. What did you think?

GZ: I’ll put it this way: Any book that includes lines like “Now I’m going to make babies with your face, Anna” is okay by me. But some of my favorite parts are more subtle, like Andrew Shaffer (‘cause, if you hadn’t guessed, Fanny Merkin is a pseudonym) making fun of Ana/Anna’s voice with totally pointless, paragraph-length, eye-crossingly dull digressions. Shaffer is equally good, though, with more obvious parody, like when he makes fun of E.L. James’ sub-high-school writing with sentences like “I gaze into his gazing eyes gazingly like a gazelle gazing into another gazelle’s gazing gaze.”

So, I understand you enjoyed the penis euphemisms? Any other favorite parts?

RJS: Oh, the euphemisms! First of all, “womb-ticklers” for Earl’s fingers is so brilliantly disgusting, I can’t even. My notes on this book–never thought I’d be making notes on this book–can be broken into 1) penis euphemisms (dangling participle being my favorite out of the couple dozen Shaffer includes); 2) cultural references I didn’t believe were real (see: bronies); and 3) sexual stuff I had to google. I’ll spare you the details on that one, but suffice it to say, I’m pretty hard to shock.

Other stuff I loved: the acknowledgment that sexual role-playing isn’t all that different from LARPing, except for the sex part. The moment when Earl Grey whips out a million-dollar bill and it has Mitt Romney’s face on it. Oh, and that Anna gets a job in an Amazon warehouse so she can break into the publishing industry and work her way up to editor.

GZ: How about Earl Grey crashing his helicopter into the Space Needle? Or the two of them doing the nasty…on top of a dinosaur? I guess many of these things could be construed as spoilers, but no one’s really reading this for the plot, are they? (And, don’t worry, this isn’t like a movie trailer that gives away all the funny parts — there is SO MUCH FUNNY!)  I mean, folks who read Fifty Shades will recognize that Shaffer’s plot loosely follows the same plot that dragged Ana and Christian along, but there’s still plenty of fun to be had here if you haven’t read that awful novel. Would you agree?

RJS: I’ve been going back and forth about this. I think you can appreciate the sheer fun and absurdity of this book without having read Fifty Shades of Grey, and you’ll enjoy a lot of the funny stuff, but you won’t really know why it’s funny. And the why counts for a lot with parody, IMO. Like, it’s beyond awesome that the inner goddess nonsense gets replaced with a Snooki-esque “inner guidette.” And that Anna is blown away by Earl’s office building because “buildings back in Portland are made of grass and mud.” That shit is funny by itself, but it’s downright hysterical when you know the source material.

Wait, did I just make another argument for why people should in fact read Fifty Shades of Grey?

GZ: I think you’re right, because the best parody always works on two levels — it’s best when you get the inside jokes, but even if you don’t, it’s still funny. That’s what we have here, IMO. But I ain’t mad atchya for making an argument to read a crappy book — in fact, after I finished reading Fifty Shames, and got my giggle fits under control, I realized that moment was the FIRST time I was happy I read Fifty Shades. (Um, I mean, second — the first time was writing our posts. Natch.)

RJS: Way to pick your battles, man. The only detail that bothered me? What kind of Holiday Inn has bathrobes? And effing room service?! I mean, that actually gave me pause.

But back to things that matter: more than making a case for Fifty Shades, what I want to do here is point out the value of reading the book you’ve been assuming is crappy so you can know for sure (and maybe be pleasantly surprised if it’s not what you expect). After all, crappy’s in the eye of the beholder, yeah?

GZ: This is true enough. But, as Earl Grey points out (and you can almost feel Shaffer going into a paroxysm of winks to his readers here): “We can’t choose the things we like any more than we can choose who we love.” The first part of that sentence just killed me. I think I laughed more about that than any of the goofy sex references and pop culture jokes. In our Fifty Shades post, we tried to account for why that seemingly “crappy” novel was so popular. Here’s Shaffer poking fun at the idea that nobody really knows.

RJS: Yeah, the mystery of how and why people love Fifty Shades is part of the fun. And I love that Shaffer pokes at the whole concept of a guilty pleasure. Some of the things Earl Grey is most ashamed of are completely benign (except maybe Nickelback), and if he’d just own them, he’d be much happier. And that’s the big lesson here: there ain’t no place for shame in the reading game.