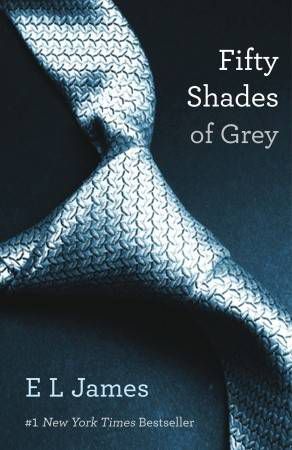 A few weeks ago, I revealed in the open thread that I was considering reading Fifty Shades of Grey. In all honesty, I’d been thinking about it for a while, but I didn’t want to do it by myself. I mean, if something is fun to do alone, it must be even better with a partner, right? So I asked my fellow Rioter Greg to join me, and to my surprise and great delight, he said yes!

Then the emails began.

RJS:  I think we should work out a schedule so that we’re reading the same things at the same time and so we can….wait for it…finish together.

GZ: Yeah, it’s definitely growing on me (the idea, I mean…)…

And then there were the Twitter DMs — were we really going to do this?

@RebeccaSchinsky: Greg, I bought the book tonight, and it is FIVE HUNDRED AND FOURTEEN PAGES LONG. That is all.

All juvenile joking aside–Greg and I are both well in touch with our inner-14-year-olds–we tried to set out with an open mind. Rather than jump to conclusions, we wanted to earn the right to have opinions about this book, and the only way to do that for real was to read it.

GZ: First impressions: Not even halfway through the first chapter, and I don’t mean to sound like a pretentious prick already, but the unintentional comedy here is priceless. I’ve laughed out loud several times just in the first 20 pages. Example: During an interview for her college newspaper at Grey’s opulent company headquarters in Seattle, terrified, intimidated and utterly out-of-her league Ana asks Grey mid-interview, loose of any context: “Are you gay?” F#%@ing awesomely hysterical. Methinks we’re in for a real treat here.

RJS: I read the first 30 pages before bed last night. Okay, actually, I read the first six pages, then my husband started bugging me, so I re-read them aloud to him. And things like this happened:

We made it through three pages before the whole thing devolved into that game where you add “in bed” to the end of the statement that came inside your fortune cookie. (My inner 14-year-old interjects here to say, “I’ll put a fortune in your cookie!”)

After the first two chapters, I’m irritated by the repetitive descriptions and am having a tough time believing that anyone makes it to their senior year of college (which is what, 22 years old?) without being able to recognize the “exhilarating shiver” that accompanies desire. Srsly? I’m also a tiny bit resentful of the fact that Anastasia attributes her intact V-card to her preference for “[her] own company, reading a classic British novel, curled up in a chair in the campus library.” I know that comes straight from Twilight and Bella’s obsession with classics, but come on. Bookish broads like the sexytimes too.

And speaking of sexytimes, when is that gonna happen?

GZ: Ah, yeah – the repetitive descriptions are brutal. How come Grey’s smiles “never touch his eyes”? Because he’s sinister? We get it! Couldn’t James have just given him shifty eyes, like the dog from The Simpsons?

Anyhow, I’m up to Chapter 11 (144 of 391 in the ebook),  and whooooaaaa sexytimes!!!  Unfortunately, though, these sexytimes so far, according to Grey, are only “vanilla sex,” presumably because they only take place on a bed and in the bath, and with no spreader bars or nipple clamps yet. However, one of the sexytimes gave Ana occasion to unleash by far my favorite line in the book so far: “He’s my very own Christian Grey-flavored popsicle.”

The plot so far is preposterous – it really isn’t much different than, “Hey, I’m here to fix your plumbing.” But no one’s reading this for the plot, right?

RJS: Or the writing. I mean, even Lena Dunham, reigning queen of the awkward sex scene, nailed sexually-aggressive dude banter better than this when, on a recent episode of Girls, she had a male character say to a female character, “I want you to know, the first time I f*ck you, I might scare you a little, because I’m a man, and I know how to do things.” Christian Grey should put that on his business cards.

Most of my being is screaming, “This is so unrealistic!”, but I know deep down that to protest its believability is to miss the point. This is fantasy, after all, and what could be more fantastic than a virgin who enjoys face-melting orgasms during her deflowering after 21 years devoid of any sexual experience whatsoever (even with herself!)? If only poor Ana Steele had grown up in the days of Loveline-hosting, “It’s important to know your own body” Dr. Drew!

In the “plus” column: I appreciate the emphasis on consent and the honest conversation about their experience (or lack thereof) and that they’re practicing safe(r) sex. That’s hot.

GZ: Also, in the “plus” column: I have to begrudgingly admit James has made me snicker a few times — times she’s actually trying to be funny. Crazy, I know. Ana has a near-constant, Herman’s Head-like inner dialogue with both her subconscious – which is prudish (I keep imagining her with a voice like Jon Stewart’s Queen Elizabeth impression) – and her “inner goddess,” which is enjoying immensely her newfound sexytimeness. Sometimes, they fight with each other. For instance, Christian tells Ana he wants to “f#$% her into next week,” and she squirms and then her “inner goddess is panting.” Later on the same page, as things escalate, Ana’s “subconscious peeks out from behind the couch, still registering shock on her harpy face.” And there are dozens more instances like that. C’mon, that’s legitimately funny, isn’t it?

RJS: So, now that we’ve seen some relationship negotiating (very important for hammering out the rules of a BDSM arrangement), and Christian, who says he “doesn’t make love,” has agreed to try “hearts and flowers” and let Ana be on top (in multiple senses of the word), I’m working on a few theories. You know the Jack Nicholson “You make me want to be a better man” thing? That line is famous because EVERYBODY wants to be the ONE person capable of making someone else want to change. James is playing on that with Christian’s willingness to bend his rules for Ana and Ana alone. Also? I think it’s really significant that James uses terms like “down there” and “my sex” and “his erection” instead of pornier or more explicit language (there’s nary a c**k or p***y to be found!), and I suspect this is a large part of the book’s success. It’s dirty without being dirty…you can have the naughty action without having to read naughty words.

GZ: I get what you mean, and I think you’re right — but it is still dirtier than most books on the shelf, and that’s a huge part of the reason, surely. Here, at the halfway point, I’ve also been struggling to account for the book’s popularity. Somehow, much, much more so than trashy grocery store aisle romance novels, this has become “culturally acceptable,” even though its “literary merit” (and I’m even rolling my own eyes using that phrase in this discussion) really is about on par with said romance novels. Who knows why things go viral or why they hit Malcolm Gladwell’s “tipping point.” But 50 Shades has unquestionably become part of the culture. Evidence: A NOVEL was the subject of a freakin’ SNL skit!  No doubt it’ll just keep getting bigger and bigger.

RJS: I’d venture to say the literary merit is actually below that of many romance novels–I’m no expert, but the ones I’ve read have been better written. The social phenomenon really is amazing, though. A bookseller friend of mine, who says it feels like she sells dozens of copies each day, calls it “the dirty little secret you can share with the whole world.” I think that’s pretty brilliant.