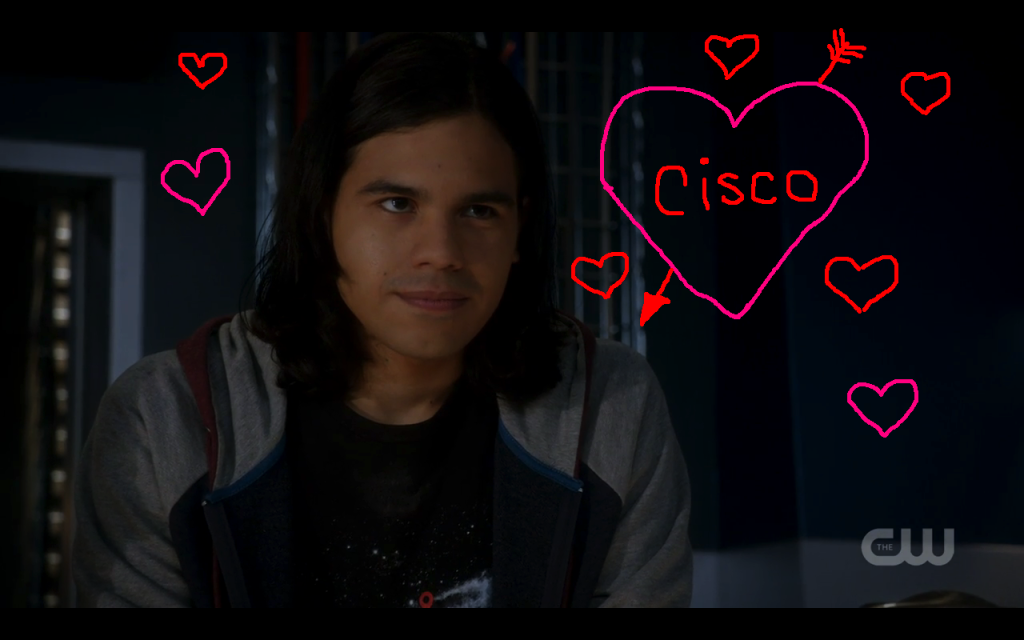 Each week Panelteers Chris and Ali sit down and chat about the CW’s newest superhero series, The Flash! Really we’re just biding our time until The Central City Picture News calls us with job offers. This week we have special quest Swapna joining us for the recap. Oh, and there will be spoilers, sweeties.

Ali: Thanks for jumping in this week, Swapna! I know this was your first Flash episode; what’d you think? Was it hard keeping up with the Fastest Show on TV half-way through the season?

Swapna: You know, I think it’s been YEARS since I’ve actually jumped into a show midseason, rather than watching it from the beginning, but I actually feel like I had a pretty good grip on what’s going on in the show. Sure, I had a few questions here or there, but it almost felt like jumping in on a comic arc–I figured out enough so that it was entertaining, but I’m intrigued enough to want to go back and watch from the beginning.

Ali: I feel like binge watching has become such a thing these days that people don’t just jump in anymore. And there’s something exciting about that I think. The CW is also really good that the “previously” on thing. And they also have a good habit of recapping what you need to know and also allude to what will happen in the first 10 minutes of the episode.

Swapna: They really do. Everyone watches TV as serial stuff these days, rather than one-shots. And while I love serial storytelling, I’ve forgotten how much fun it is to just jump into something with NO idea what is happening and try to figure it out!

Ali: Awesome! I almost feel like we should start with Wells because, for the most part, they keep him an enigma wrapped in a mystery who has a secret room full of weird stuff. I’m curious to hear what you made of him.

Swapna: First of all, let me say that I love Tom Cavanagh and I had no idea he was on this show, so I was super excited about that. I’ve never seen him in this type of role before, but I think he did an excellent job.

So yeah, NO idea what to make of him, but I really loved the part where he took the mea culpa for the team in front of the press. It’s quite possible it was completely disingenuous, but I could tell just from the recap at the beginning that they were setting him up to be the bad guy, and I love to see him have more complexity than just a black/white bad guy.

(All of that being said, I realize there might be background that I don’t have where that scene was part of his larger dastardly plan.)

Ali: I spent a lot of the early episodes yelling, “No, Ed! NO!” at the TV. Wells is a master manipulator. What we do know is that he faked his injuries from the Particle Accelerator explosion, so he can walk and doesn’t need the scooter. We also know that he’s from the future on a creepy mission to make sure Barry becomes the Flash. The big reveal at the mid-season finale is that Wells’ is the Man in the Lightening that killed Barry’s mom (because superheroes need dead moms).

So I totally agree with you about the mea culpa being just another part of his dastardly plan and not necessarily because he’s a good guy. I’m also excited that Joe and Eddie are on to him. Well, not really onto him-onto him, but they know he’s not what he seems and they don’t trust him.

Swapna: I REALLY want to go back and watch the previous episodes now because it seems like they’ve built a fascinating backstory for this. I’m a sucker for a good mythology.

Ali: This show has been fantastic and building out its mythology. It packs a lot in the episodes but it never feels like a heavy show. We got movement on Wells’ story in this episode and some great character stuff for Cisco, on top of fighting the Villain of the Week.

Also. Cisco has always been one of my favorites. And I think in this episode he stole the show. His back and forth with Hartley was fast and smart. I love that in all the flashbacks (ha!) Cisco is basically like “I don’t have time for condescending crap. I’m here for SCIENCE.”

Swapna: I really liked his character generally. He seemed smart, sharp, and quick witted. Have they given his character a back story tied into the explosion, beyond what we saw in this episode?

Ali: Not really. I mean, we know he was there. And we know that Robbie (who’s the guy Hartley is talking about at the end) saved Cisco from the explosion. Mostly Cisco is the funny, nerdy one who gives cheesy/awesome names to all of the Flash’s villains. (I mean, he’s more than that; he’s really the heart of Team Science and he keeps everyone laughing). He IS super smart but you don’t always get to see that. Basically I love Cisco and need to gush about him each week. And this episode gave me lots of reasons to gush.

And how about our Villain of the Week? A lot of the show’s bad guys are people who, like Barry, were affected by the particle accelerator explosion. It’s starting to feel a bit tired, so I really liked how much of a history Hartley has with Team Science. He felt more motivated than the other bad guys we’ve seen. Although, not gonna lie, I was sad there was no singing.

Okay, I’m disappointed there was no singing too. But I did like the villain in this case. The last superhero show I regularly watched was Smallville, and I got SO TIRED of the villain-of-the-week secret of the ooze level cheesiness. This seemed to have more depth and history, and I appreciated that. But I think on a higher level, I like how the show and its characters don’t seem to take themselves too seriously. There’s a real whimsy. Which, I guess, is why there’s singing? (I really need to go back and see this)

Ali: You haven’t missed any singing. Only the promise of singing. But there was that scene where you have Jesse Martin and Grant Gustin, who both have a good set of pipes on them, talking about the sonics of making glass break and I DON’T UNDERSTAND WHY THEY WEREN’T SINGING!!!!!!! WHY!!!

The shows greatest weakness is the lack of singing. Well, that and the Smallvillesque monster of the week trope. But they’re working on the latter.

Around now is when we do the Lightning Round! Just quick bits that we loved and what to give a shout out. For me, I’m going with THE SPEED FORCE!!!!! Huge piece of Flash mythos and we finally get a reference to it!!! There were arm flails and happy dances in my apartment.

Swapna: Okay, I’m going with Hartley Rathaway and his weird, twisty vibe. There was something just not right with that guy, and it was chilling in an awesome way. Kudos to The Flash for, on my first episode, delivering a truly interesting baddie who, in his last scenes, got to do some awesome presumed foreshadowing.

Ali: How creepy was that “Are they going to listen to you die?” line?! SO CREEPY.

Swapna: SO CREEPY. I just felt like there was so much anger and rage seething from the character. It’s not often that TV generally, much less superhero shows, get to feature a layered, complex villain.

Ali: I’m not saying the other villains on the show haven’t been rich characters, but Hartley definitely is one of the most complex ones we’ve seen.

On a totally unrelated note. I have to give a shout out to Joe’s “Spaghetti a la Meat”. I have no idea what’s in that but I’m sure it’s tasty and comforting.

Swapna: Okay, and one more shout out for me: Is it just me or is Grant Gustin kind of adorable?

Ali: SO ADORABLE. Ridiculously adorable. Basically I am in love with his charming adorableness.