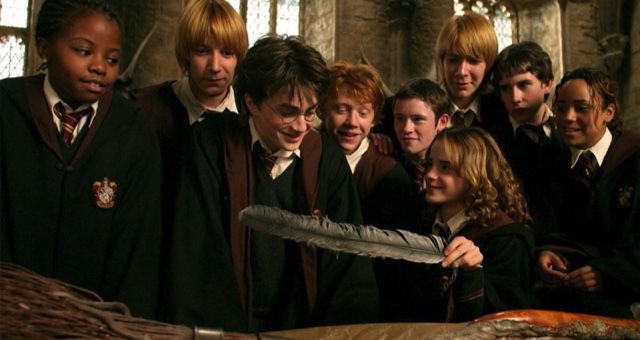 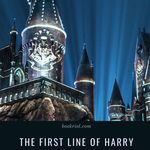 Love, hate, or feel meh about Harry Potter, it’s hard to argue that J.K. Rowling filled the books with intentional writing choices. From made up words to the meanings of names to the well-scripted first and last lines of each novel, Rowling wanted to the writing to match the intricate fantasy world she created for the now-iconic boy wizard. To examine a few of these choices, I’ll be taking a closer look at the first line of Harry Potter, as well as the last lines, from all of the Harry Potter novels.

1. Harry Potter and the Sorcerer’s Stone 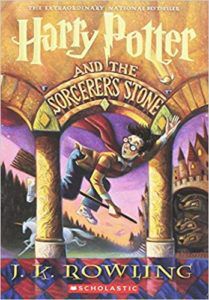 First line of Harry Potter: “Mr. and Mrs. Dursley of number four, Privet Drive, were proud to say that they were perfectly normal, thank you very much.”

It might seem odd to begin a series about the wizard world talking about the boring old Dursley’s. But with this sentence—the very first line of Harry Potter—Rowling sets up a status quo that Harry’s arrival and the wizarding world is about to blow up. The sentence also does a fair bit of character building for Mr. and Mrs. Dursley that readers will need to understand Harry’s childhood before discovering his true past and being allowed to leave this “perfectly normal” world he doesn’t fit into.

Last line: “I’m going to have a lot of fun with Dudley this summer…”

As a last line, Rowling provides a segue from Hogwarts back to the Muggle world. However, there is a lot of hope in Harry’s last quotation. Rather than returning to a family that’s ignored and exploited him, Harry’s experiences over the year empower him to stand up to his former bully.

2. Harry Potter and the Chamber of Secrets

First line: “Not for the first time, an argument had broken out over breakfast at number four, Privet Drive.”

Again, Rowling starts the second novel away from Hogwarts in the Muggle world of the Dursley family. However, this time the beginning sentence emphasizes Harry’s conflict with this world. It suggests there have been a number of conflicts and one thing is very clear: Harry Potter is more at home at Hogwarts than with his aunt and uncle.

Last line: “And together they walked back through the gateway to the Muggle world.”

This is another vaguely hopeful line that marks the transition away from Hogwarts back to the summer which Harry must spend with his Aunt and Uncle. Harry’s survived another dangerous year at Hogwarts, and he is surrounded by a large group of friends as the story closes.

3. Harry Potter and the Prisoner of Azkaban 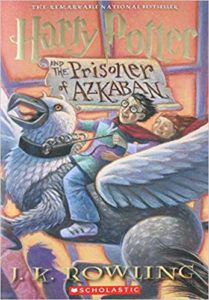 First line: “Harry Potter was a highly unusual boy in many ways.”

This is, perhaps, the most on the nose way for Rowling to echo the previous opening Harry Potter sentences. In case you forgot or didn’t read the previous two books in the series: HARRY POTTER IS WEIRD. He’s weird and he doesn’t belong in the world of the Dursley family. This tension fuels this dramatic opening where (as readers know) Harry will disastrously blow up his cruel Aunt Marge and run away from home before making it to school this year.

Last line: “And, grinning broadly at the look of horror on Uncle Vernon’s face, Harry set off toward the station exit, Hedwig rattling along in front of him, for what looked like a much better summer than the last.”

Another hopeful transition back to what we know is Harry’s least favorite place to be. Harry hopes what he’s gained over the year, namely his connection to his father’s best friends Sirius and Lupin, will improve his life at the Dursley’s house. The look on Vernon’s face portrays another power shift between Harry and his old life with his uncle ordering him around.

4. Harry Potter and the Goblet of Fire

First line: “The villagers of Little Hangleton still called it ‘the Riddle House,’ even though it had been many years since the Riddle family had lived there.”

This opening line introduces a shift in how Rowling decides to open the remaining novels in the series. Instead of just being away from Hogwarts, the novel opens away from Harry to raise the stakes and show more of Voldemort’s past and the beginning of his return to power.

Last line: “As Hagrid had said, what would come, would come…and he would have to meet it when it did.”

Inarguably, the darkest novel in the series so far, Harry can’t be as mischief loving as he was in the previous books. He’s just witnessed the death of Cedric. He’s narrowly escaped a duel with Voldemort, and he now understands the dangers of the upcoming days. Still, Rowling tries to offer some comfort through the advice of Hagrid. There is a lot for Harry to worry about. But these words also give a sense that he can handle whatever will happen.

5. Harry Potter and the Order of the Phoenix 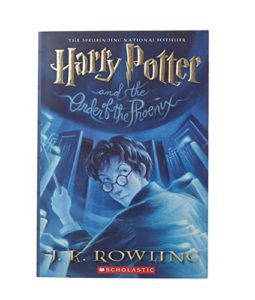 First line: “The hottest day of the summer so far was drawing to a close and a drowsy silence lay over the large, square houses of Privet Drive.”

This opening brings us back to Privet Drive and the world of the Dursley family. Rowling emphasizes the “normal” aspects of the neighborhood through words like “drowsy” and “silence” and the square houses. However, instead of Harry being the outlier in the neighborhood, soon more threatening creatures from the wizarding world will threaten this silent scene.

Last line: “Instead he smiled, raised a hand in farewell, turned around, and led the way out of the station toward the sunlit street, with Uncle Vernon, Aunt Petunia, and Dudley hurrying along in his wake.”

Harry has faced even more tragedy at the end of book five. But, again, in his transition away from Hogwarts, Rowling gives readers hope with Harry’s smile and sunlit farewell.

6. Harry Potter and the Half-Blood Prince

First line: “It was nearing midnight and the Prime Minister was sitting alone in his office, reading a long memo that was slipping through his brain without leaving the slightest trace of meaning behind.”

This penultimate first line of Harry Potter shows how the scope of the story has widened even further. By beginning with the British Prime Minister, readers can now see the national scope of the threat of Voldemort’s return. While the series sticks, mostly, with Harry, the affects of the spread of dark magic are far-reaching.

Last line: “His hand closed automatically around the fake Horcrux, but in spite of everything, in spite of the dark and twisting path he saw stretching ahead for himself, in spite of the final meeting with Voldemort he knew must come, whether in a month, in a year, or in ten, he felt his heart lift at the thought that there was still one last golden day of peace left to enjoy with Ron and Hermione.”

It’s hard to imagine a more tragic ending than the death of Dumbledore. This ending does not ignore the danger or intense sadness of what lies ahead. Harry fully knows now that he will be the one who must stop Voldemort. But Rowling’s signature optimism comes through as we see Harry experiencing the joy of friendship even in the darkness.

7. Harry Potter and the Deathly Hallows 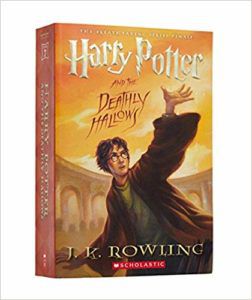 First line: “The two men appeared out of nowhere, a few yards apart in the narrow, moonlit lane.”

As with books four and six, the final Harry Potter novel begins away from the title character. There is a heightened sense of mystery in these lines. Who are these men? How did they appear out of nowhere? The moonlit lane only adds to the mysterious vibe. If you—for some reason—weren’t sure about finishing the series at this point, the questions would keep you reading.

Last line of Harry Potter: “The scar had not pained Harry for 19 years. All was well.”

There’s a lot of controversy about this—the last line of Harry Potter—the epilogue that ends the Harry Potter series. Some people love it and others find it cheesy. Rowling wanted to give this happy ending to her characters. While she originally had the series end with the word scar, she amended her plan to end with the words “All was well.” There is no more twist in the hopeful vision Rowling presents at the end of each book. No “except” or “but” or “in spite of” to go with the peaceful vision. And this isn’t the perfectly normal thank you very much world of the Dursley’s that the series begins with either. Harry feels fully integrated in the wizarding world. He no longer has to go back and forth or fear the looming fight with Lord Voldemort. He and Ron and Hermione survived their struggles and went onto lead apparently normal lives. Well, normal for a witch and two wizards.

My main takeaway from all of these opening lines and closing lines are Rowling’s attention to setting. How her beginnings hint at tension or even danger. How her endings offer a sense of hopeful conclusion even when another book is on the way. The series begins with the status quo world of the Durselys turned upside down by the murder of Harry’s parents, the very night Harry received his scar. But the ending brings the story full circle. Harry is himself a parent. And the world is returned to a very different sort of normal, where Voldemort’s specter no longer looms (at least until you read Harry Potter and the Cursed Child.)