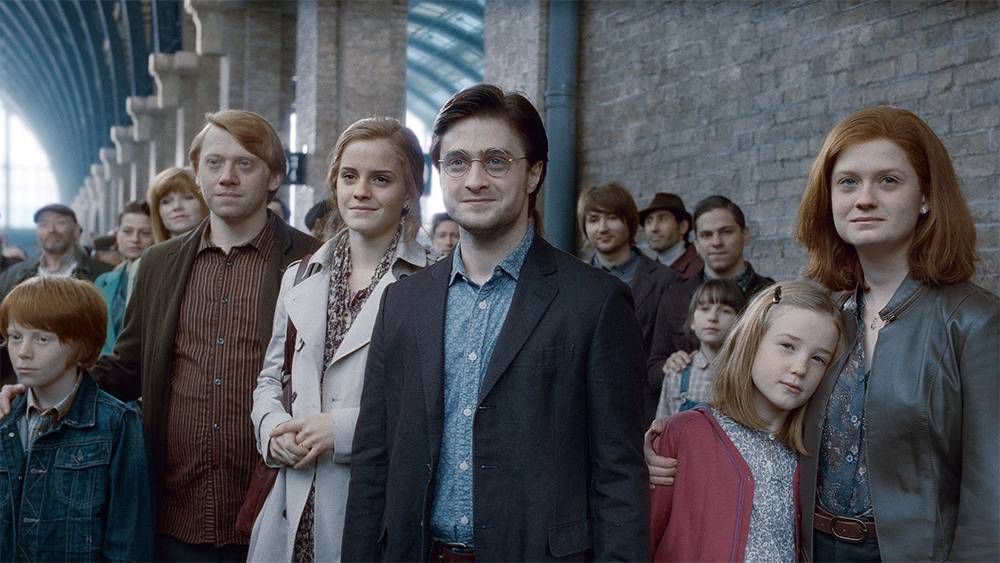 “The scar had not pained Harry for nineteen years. All was well.”

I’m a defender of the epilogue. People are often conflicted about the Harry Potter epilogue—whether due to the names or the seemingly-non-magical way it ends. For me, it says something about what the Harry Potter books have to say about happiness. Many of Rowling’s creatures and themes are about happiness—the dementors are symbolic of depression, while Lupin teaches his students to face and laugh at their deepest fears, and many of the villains are those who took for happiness in pride and ambition, where they’ll never find it.

Rowling knew where the real happy ending lies. A lot of magic exists in danger, in adventure, in flying and tumbling and fighting. But real happiness doesn’t lie there. Harry’s happiest memories are not of defeating Voldemort, they usually of Ron and Hermione—of their friendship—and another is of seeing his mother and father in the Mirror of Erised. They are mostly quiet moments, of family and friendship. There would have been no happy ending for Harry if he had had another adventure to go on, or another evil to defeat. In the end, the victory cry of the series is just that: Harry has a family, he has his friends, and he knows that both are safe and will be okay.

Rowling could have ended the series on an exciting upswing. This was a book about magic, and it could have ended in the moment of victory, or with a classic fantasy-style wedding-ending, or with glimmers of Harry’s future auror adventures. But instead, she brought us the epilogue, where Harry’s son experiences glimmers of the anxieties that Harry first did just before the sorting ceremony, where Ron makes jokes and where Hermione frets, where Malfoy and Potter haven’t made up but don’t exchange insults either, just let things be.

That’s why the epilogue has always struck me with such force. I know that some of the defining moments of my life, surely, will be those in which I fight dementors, or boggarts, or death eaters, the moments I protest, the moments my anxiety gets the better of me, or moments of heartbreak.

But just as I won’t look back on my life and define it as a sad one due to the singular challenges I’ve faced, true happiness won’t come from the extreme moments, the moments of wild adventure and victory, although those too will define me.

Happiness is not always about the magic, the sparks, the victories. Happiness is often contentment. It’s knowing that you and the people you love will be okay. That you have reached a place in your life that you are satisfied with. That the world is a better place than when you began.

Happiness, for me, will be looking back on my life and saying, “I am okay. I have made it through, and my scars no longer pain me. I am content with the way my life has gone. All is well.” That my anxiety doesn’t trouble me as much anymore, or that I’ve learned to deal with it better, or that I have people around me who help me do so. That I’ve become a writer, like I have so far worked hard to be. That the people I love are safe. That all of us are going to be okay.

That’s why All was well is etched into my left shoulder blade—it was my very first tattoo, and I always knew what that would be. And it’s also why this morning, September 1, at 9 a.m. London time, the very day and hour the epilogue takes place, I’ve managed to be in King’s Cross, in London. To be here. To feel it.

I have always loved Harry Potter’s happy ending. And it happens today.