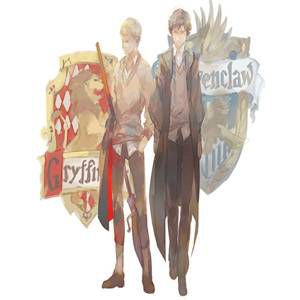 It all started with Rainbow Rowell’s Fangirl. I had been aware of the existence of fan fiction before, but I had never sought it out. I had never read any. I didn’t know that there was a whole community, a whole vocabulary that surrounded it. I was curious.

I started out by finding a popular, well-received Harry Potter fic. I started with HP because I had read and loved all the books, though I stop short at calling myself a true “fan,” at least not the sort that people think of when they think of fandom in general. I did have a good grasp of and appreciation for the HP universe, though, so I thought I could handle it.  I started with a story about Ron and Hermione’s oldest daughter. She’s a 6th year student at Hogwarts (I think), and she finds herself pregnant after an impulsive encounter with Draco Malfoy’s son. I think her parents were a little OOC (out of character), but, it was a nice enough little story. I could definitely see how reading something like that on occasion could help fill the void left by the fact that there are no more HP novels coming our way.

Occasionally, I would look up a one-shot in between the books I was reading, and I would find some of the most interesting little stories about characters that I had all but forgotten, or I’d find a story where someone took a little, insignificant mention in one of the novels that someone fleshed out and made real. It fascinated me. But, then I would find some really out-there crossover fic, and I would be turned off the whole thing.  There are some universes that should not mix.  Harry Potter and Edward Cullen should never cross paths.

The reason that I didn’t dive further in initially was, I think, because of my casual fan status. I was invested enough to get too caught up in things. It had been a long time since I’d felt so strongly about something that I could claim die hard fan status. Then, the weekend after Christmas, that all changed.  I watched the BBC Sherlock for the first time, and I fell in love. Given that there are only 9 episodes (and three of those only came out after I had discovered the show), the universe is still small enough that I can immerse myself in it fully. And I have.

We’re almost 3 months into the new year, and as of yet, I’ve finished 3 books – all on audio.  Why? Because I’ve been reading and reading and reading Sherlock fan fiction. I’ve immersed myself in it. I’ve done this for two reasons. First, I love the show and everything about it. I had to fill the void after 9 episodes. I admit it.  Second, my curiosity got the better of me. When I started seeing the topics and trends, and I couldn’t quite figure out how or why people’s minds had in those directions. I had to look.

For the first 6 weeks or so of my trip down the fan fiction rabbit hole, I read mostly Johnlock fiction. This is (for the uninitiated) fiction that focuses on a romantic/sexual relationship between Sherlock Holmes and John Watson. This takes many, many forms, and, many times, ends with them being parents to adorable, intelligent, and highly annoying children. Sometimes, they even become vampires. This is, however, where I stopped. I couldn’t do it anymore.  It moved too far away from the cannon for my taste.

I found that I couldn’t give up fan fiction entirely, however. Instead, I decided to switch gears. I began reading Sherlolly stories (or stories that focus on a romantic/sexual relationship between Sherlock Holmes and Molly Hooper).  This has been more enjoyable for some reason. I think I really like the fact that she is a very strong and determined character in most of these stories. I like the personality that comes through, and I like that she’s the one that is able to finally tame Sherlock.  But I’m starting to sour on them, too. It’s time to break the habit. It’s time to return to my books.

This is what I’ve learned: writers of fan fiction are incredibly capable and inventive. They hold themselves to high standards, and they take the feedback that they get from other fans very seriously. And those other fans, for the record, are highly supportive. I never once came across a troll (doesn’t mean they aren’t out there, just that I didn’t see them).  I even, at one point, dabbled in writing my own because it occurred to me that it was a great way to get used to writing on a regular basis. When the stress of world-building is taken away, it’s much easier to let the words flow. Eventually, the act of writing becomes so comfortable that the idea of building my own world from the ground up isn’t as intimidating as it once was.

I’ll still read fan fiction, but not exclusively and not with any where near the same frequency as I have over the last (almost) 3 months. I can’t give it up entirely. I am ready to move on, though. Especially after finding a Sherlock/High School Musical crossover fic this morning, where Sherlock is Gabriella and John is Troy.