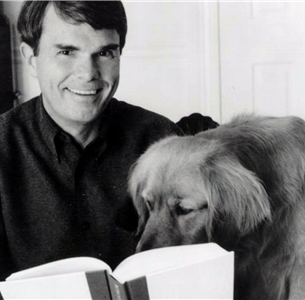 This September, I’ll have been reading Dean Koontz for twenty years. (Preteen diaries are an excellent resource if you’re looking to celebrate odd anniversaries.) In that time, he’s managed to terrify me, teach me, surprise me, and push the boundaries of my imagination. For these gifts, I thank him.

But I’ve also noticed recent changes in the tone of his work that leave me disturbed. His books used to, but don’t always now, impart hope.

I finished Ashley Bell at around one a.m. on Christmas morning. While there’s a lot about it that I found fresh and piquing, it frustrated me by spurts. If forced to review it, I would, out of loyalty, praise it in lieu of an objective critique. I have affection for Koontz. I don’t want to jump to invectives with him.

But I can’t get over this sense that someone punctured a bag of darkness into his otherwise optimistic writerverse. If I had to date it, I’d say: sometime shortly after The Taking. Since around then, there have been bits of a bad taste. Something seems off.

At the end of a book I love, I sometimes wish I could run to the writer and have long discussions about what it illuminated for me, what moments of prose were unexpected and perfect, and where I’m left with new questions. I could probably force such an outpouring for Ashley Bell. But what I’m most craving now is an interaction a little less bubbly. Let’s say: praise, but over drinks. Over drinks, you get the truth.

By the end of Drink 1, I might be ready to say “I’m not sure it’s completely necessary to have your black characters talk differently from your white ones. Caricatures don’t replace good character-building. Also, it’s gross.”

By the end of Drink 2? Let’s progress to “and really, not every woman character needs to be called a ‘bitch.’ Some of them were wretched people. Some of your characters were being wretched with the bitch-drop. Nevertheless: bitch bitch bitch bitch bitch starts to feel hostile, you know?”

By the end of Drink 3: “OHMIGOD, we get it, you think there’s something vile and anti-intellectual about academia. If it doesn’t serve the plot, though–and, really, I think the evil professor’s professorship was a bit gratuitous–maybe drop it for a book or two.”

By the end of Drink 4: “it was absolutely unnecessary, and untrue, to have your protagonist wryly reflect that if she were wearing a burqa, she would avoid suspicious looks. Seriously, guy. If you don’t actually know better–and I think you must, Strangers
is just too smart–we can test the theory. Wear a burqa and walk through your quaint seaside town. Count how many hateful glances you don’t get.”

By the end of Drink 5: “The neo-Nazism is perhaps not functioning as you think it is. Is anti-Semitism a real problem? ABSOLUTELY. It’s such a real problem that you don’t have to imagine the bigots into existence. I’m not sure that the best way to illustrate discomfort with bigots is to have your protagonist be the author of the only real bad guys. Did you mean to imply that there’s not an actual supply in the world? Do we want to suggest that anti-Semites are a cardboard enemy? Because that’s how it comes across.”

By the end of Drink 6: “The dogs. The dogs again. That’s all. (Your new jacket photo, though. That library. Good job.)”

By the end of Drink 7: “Naming a character–even a villain, even in the service of hyperbole–after concentration camps is crass. Some might say that it diverts attention from what those names rightly evoke–horror; sadness for those lost–to something obviously less important. Don’t. Also: don’t.”

By the end of Drink 8: “*unintelligible mumbling* Lightning
is still perfect, though. THEN, then you knew how to write real Nazis.”

…I expect that, by the end of drink eight, I’d be kicked out of the bar for having said “Nazi” too many times. (I applaud the imaginary bartender’s decision.)

But since I’m not going to be granted the opportunity to stumble home from berating Koontz, I can at least express the ambivalence with which I’ll stumble toward his next release. There’s always a little of that old Koontz magic present in his new books; I just wish I did not have to bump into spots of ugliness to get to them.

Koontz is (was?) wont to imagine a humanity that does better. At the very least, the moments of his books that jar me now might be a useful reminder that getting to a better humanity will require all of us–not just the neo-Nazis and the insidious academics–to commit to earnest and continual self-reflection and self-improvement.

Everyone. Even the authors of our hope.