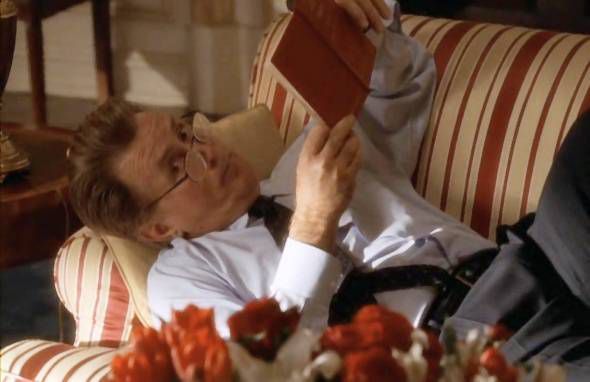 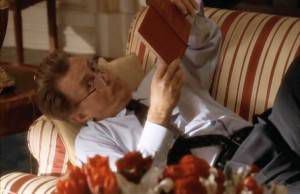 For Election Day, I couldn’t help but revisit one of my favorite intersections of literature and pop culture: The West Wing.

I’ve posted before about my infinite love for Aaron Sorkin. That love takes no greater form than in what I consider his Opus, The West Wing. Running for seven seasons (of which Sorkin was a part of for four), The West Wing is every liberal political wonk’s dream White House. Filled with smart, feisty, passionate, well-meaning people, The West Wing provided fictional escape from a political process that isn’t nearly so elegantly scripted.

Pretty much every character on The West Wing is obscenely well-educated and bizarrely nerdy, particularly when it comes to history, law, politics, and, yes, literature. A conveniently placed literary reference never fails to make a point. Take for example the episode “Dead Irish Writers” from the third season. Toby and Ambassador to the U.S. from the United Kingdom, Lord John Marbury, are discussing whether controversial member of the Provisional IRA should be invited to the White House, and they have the following exchange:

TOBY The President’s not a kid.

MARBURY Your country is. You’re involving yourself in a centuries-old conflict without sufficient regard for history. Listen to the warning of old friends. It was Kipling who warned to expect “the blame of those ye better, and the hate of those ye guard.”

TOBY And wasn’t it James Joyce who said, “History is a nightmare from which I’m trying to awake.”

MARBURY Yes, but it was your own great Irish master, Eugene O’Neill who said, “There is no present or future, only the past happening over and over again — now.”

TOBY You’re saying we should butt out of Ireland until we know what we’re doing?

Another one of my favorite literary allusions is from season five, the episode titled, “No Exit,” which is a reference to the Jean-Paul Satre play of the same name. The premise of both the play and the episode is the same: people are confined to rooms they cannot leave, and are forced into conversations and situations they otherwise would’ve liked to avoid. Toby and Will never actually name the Satre play, but do make reference here:

TOBY How long has it been?

WILL Half an hour.

WILL You mean Sartre.

TOBY If I meant Sartre, I would have said Sartre.

WILL “Hell is other people.”

Of course the Beckett reference there is to his play Waiting for Godot.

One of the very best soliloquies of the series comes in the second season, when Bartlet rages to God at Washington’s National Cathedral, and not only is a large portion it in Latin, he also quotes Graham Greene:

BARTLET She bought her first new car and you hit her with a drunk driver. What, was that supposed to be funny? “You can’t conceive, nor can I, the appalling strangeness of the mercy of God,” says Graham Greene. I don’t know who’s ass he was kissing there ’cause I think you’re just vindictive. What was Josh Lyman? A warning shot? That was my son. What did I ever do to yours except praise his glory and praise his name?

On a less serious note, in the first season, Donna is prodding Josh to call Joey Lucas, and quotes the poem “To the Virgins, To Make Much of Time” by Robert Herrick:

DONNA Gather ye rosebuds while ye may, Josh. Do you know what that means? It means you should take this time to gather rosebuds, because later on you might not be able to.

DONNA I’m just saying, call her and stop bugging me.

And just because it wouldn’t be The West Wing without a random Shakespeare reference that probably very few people understood, in the episode “The Supremes” from season five, Josh jokes to Donna that he’s on the wrong side of an argument when he supports a candidate for the the Supreme Court, who could not possibly be confirmed by the Senate. And only in The West Wing would he joke by making a reference to the Shakespeare play, Henry V:

JOSH There’ll be hell to pay at Agincourt. I’ve offended the Dauphin.

There are so many more fantastic literary references in The West Wing that I’d have to scour transcripts for days to find them all. But I’m sure I’ve missed some other great ones. What are your favorites?