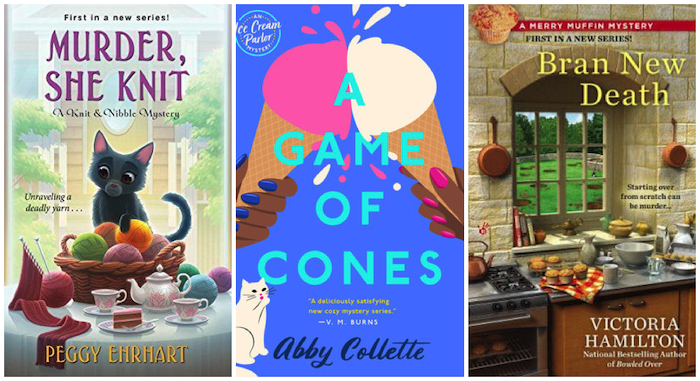 Need more puns in your book pile? Look no further than the cozy mystery shelf, where the good old-fashioned wordplay is a signature of the genre. Grab a hot mug of tea, your softest throw blanket, and maybe a companionable cat as we dive into the punderful world of punny cozy mystery titles.

Murder With a Side of Wordplay

Cozy = comfort. While getting the warm fuzzies reading about death may seem strange, every cozy mystery fan knows it’s how the familiar genre elements come together that makes for a cozy escape. Choosing a cozy mystery, the reader expects more than just the requisite dead body: an amateur sleuth, a small community of some sort (idyllic village, knitting circle or pastry aficionados), minimal gore and sex, and a hefty dose of light-hearted entertainment.

The right title promises all those things before you even get to the book blurb. And that’s where the puns come in. On her blog, cozy mystery author Mary Feliz lists the current requirements for cozy titles: “1) They’re puns; 2) They mention death or murder; 3) They’re consistent with the detective’s profession; 4) If they lean toward the more slap-slap-stick end of the genre, they’re funny.” Clearly, these punny titles are doing double duty, signaling a gentler form of murder mystery and teasing the theme.

Check out a bestseller list for the genre and it’s clear: cozy authors have gone all in on the puns. Assault and Batting (knitting mystery) and Swan with the Wind (farm mystery) are just two of the titles on one list. Book Riot’s been rounding up these pun-derful titles for a while.

When Did the Wordplay Start? Punny You Should Ask…

The cozy mystery traces its roots back to Agatha Christie and other “Golden Age” writers whose  murders tended to disrupt otherwise quaint country villages and drafty manor houses. While cozy, the mysteries rarely resorted to the pun. Christie drew from literary allusions and nursery rhymes. Dorothy Sayers got right to the point (see, Unnatural Death). Notable cozy authors of the 1970s and 1980s  like Elizabeth Peters and Dorthy Gilman weren’t terribly punny either.

Punny titles have been popular since at least the early 1990s. M.C. Beaton’s Quiche of Death (1992) for example, ticks all the boxes for the modern pun: from the title alone, you know you’re getting a funny murder mystery with some baking thrown in. Other authors quick to get in on the action include Rita Mae Brown and her cat co-sleuth with Rest In Pieces (1992), the second in the Mrs. Murphy series of 30 puntastic titles that include Claws and Effect (2001) and Hiss of Death (2011), as well as Susan Wittig Albert’s kitchen-herb themed Thyme of Death (1992). Since then puns have taken off. Authors and publishers try to draw fans of established punning series to new titles with the same lighthearted wordplay.

Additionally, puns proliferated thanks to the increasing demand for hobbyist sleuths. With readers looking for mysteries in bakeshops, coffeeshops, knitting circles, the title needed to convey not only the genre (Murder) but also the theme. If they’re not going the straightforward route like Joanne Fluke’s Carrot Cake Murder and other  “Baked Good + Mystery” titles, authors often opt for puns to add pizazz and stand out on the shelf. Hence the rise of coffee puns in Cleo Coyle’s Coffeehouse series like On What Grounds (2003), knitting puns (all of Maggie Sefton’s Knitting Mystery titles like Skein of the Crime (2010)) and gardening puns and Heather Webb’s A Hoe Lot of Trouble (2004).

According to a 2017 trend report in the mystery magazine The Big Thrill, crafting-themed cozies declined in favor of cozies about small business owners, bringing a whole raft of new occupational puns. Misty Simon’s Cremains of the Day (2017) for mystery with a funeral parlor sleuth, Abby Collette’s A Deadly Inside Scoop (2020), featuring a family ice cream shop, and Shelly Harris’s professional garage sale organizer in Let’s Fake a Deal  (2019) are just a few examples. Whatever the theme, puns show no sign of dying down any time soon.

Punny cozies are now enjoying a third decade of popularity, even as genre trends shift. So why are puns so popular for cozies? Maybe it’s because they are not that different than mysteries. Humor expert Peter McGraw said in an Atlantic article that to understand a pun “[y]ou’re relying on a person’s ability to parse language, to understand the nuances and complexities of words.” Just like a clever clue, a pun makes you draw connections and consider multiple possible meanings. Puns are also the opposite of sarcasm. They’re always playful and mostly goodnatured, just like our favorite cozy sleuths.