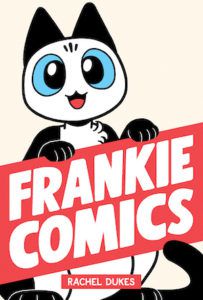 When they discover a kitten asleep in their doorway, real life artist couple Rachel and Mike immediately fall prey to her charms. Soon, the new queen of their home is a blue point Siamese cat named Frankie. Stealing snacks, making mischief, and taking snuggling very seriously, Frankie proves again and again the wholesome joys of a feline companion. Hilarious indie comics darling Frankie Comics is collected for the first time in this full-color hardcover edition – purrfect for pet lovers everywhere.

As a self-identified failed academic, I’ve spent a lot of time in university libraries, researching literature and straying into history, politics and sociology along the way. One of my favourite libraries – not just for study, but as a place to sit, relax, and soak in a bookish atmosphere – is the Bodleian Library in Oxford, one of the UK’s copyright libraries.

There are five copyright libraries (otherwise known as legal deposits) in the UK, and another one in Ireland: The British Library (London); the National Library of Scotland (Edinburgh); the Bodleian Library (Oxford); Cambridge University Library (Scunthorpe…no, just kidding, it’s Cambridge); the National Library of Wales (Aberystwyth); and Trinity College Library (Dublin). Their special status as copyright libraries means that they’re allowed to request, and receive for free, a copy of any book published in the UK, as long as they ask within the first year after the book is published. (The British Library has a slightly different arrangement – publishers have to send them a copy of every book, whether the library asks or not).

Why have libraries that contain literally every book, rather than the ones that readers are likely to request? There are plenty of reasons, benefiting not only the library and its users, but authors and publishers too. Copyright libraries are usually connected to universities, or based in towns with a strong history of learning and research – so being able to request pretty much any book that’s been published in the last few centuries is invaluable to researchers. It’s also useful for writers trying to track down a copy of one of their books that’s gone out of print, or for publishers who have been established for long enough that they no longer have a place to store every book they’ve ever produced.

As well as these practical reasons, copyright libraries are such an important part of our culture and our national heritage. Preserving knowledge and stories in a way that makes them accessible for future generations is a worthy task, and something the librarians in these libraries take incredibly seriously. Thanks to the legal deposit system, even the most obscure book with the smallest distribution will be kept safe, available for some future reader who might be inspired by its contents.

The historical role of copyright libraries means they’re not just places for serious academic study – a lot of them take on a museum-like role as well, putting together exhibitions themed around valuable and ancient works, or exploring genres, or delving into different aspects of literature. The Bodleian has had a roster of exhibitions playing to Oxford’s strengths, particularly its status as the birthplace of some of our most famous fantasy series – one of my favourites being the Magical Books exhibit, which included manuscripts, illustrations, and scribbled notes by some very familiar authors. The library has put several of its past exhibitions online for anyone who missed them, and they’re very much worth a browse. The British Library did a similar deep dive into genre fiction with an enormous exhibition showcasing the history of sci-fi, once again drawing on texts it has kept hold of that might otherwise have been lost. Their ‘Treasures of the British Library‘ exhibition is set to run for at least another 15 years, and if you head along, you’ll be able to see objects from Shakespeare’s First Folio to Jane Austen’s writing desk, as well as a whole host of less famous artifacts.

In a world that feels increasingly unstable, it’s good to know that copyright libraries exist – to keep hold of everyone’s stories and other writings, whether they’re from the most famous authors or the newest debut, on topics that everyone knows about or something so niche that only four people will ever read about it (but they’ll be completely absorbed when they do). While I’m no longer trying to make it as an academic, I still love spending time in copyright libraries, reading books I would never have been able to find otherwise, taking notes, and soaking in years of keeping books safe for the future.

For some extra online offerings from libraries, check out our article on More Fascinating and Free Things from the Library of Congress Website. If you want to learn more library stats, read about The World’s 10 Biggest Libraries.