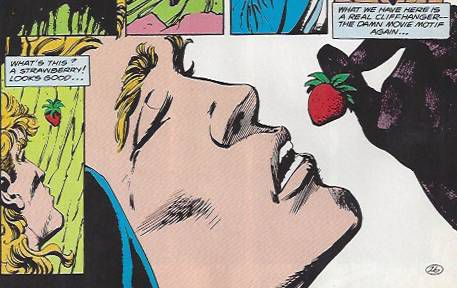 A faceless protagonist from the ’60s, recreated as a warrior on a spiritual quest for identity — one of the most idiosyncratic (and perhaps personal) — revamps of late ’80s comics.

I want to write about Greg Rucka and his stories with Vic Sage and Renee Montoya (in her facless incarnation), but I can’t do any of that without first talking briefly about one of my favorite comics of all time: The Question, as recreated by writer Denny O’Neil and artist Denys Cowan.

Originally conceived as an Ayn Randian objectivist by Steve Ditko for Charlton Comics in 1967, The Question ended up at DC Comics after the Charlton characters were folded into the DC universe. The character made a few appearances in various DC books (including Crisis on Infinite Earths), but he is perhaps now best known for his reinvention in a 1987 “Mature Readers” series by the aforementioned O’Neil and Cowan. While the series only lasted 34 issues (plus a couple of annuals and a handful of issues of The Question Quarterly), it left its mark.

I discovered the book at age 16 or 17, which, looking back, makes a lot of sense for a book about a quest for identity — at a time when you’re a student quickly racing toward decisions about your future, your role in the world, while still considered neither adult nor child.  Vic Sage is a man with multiple identities — a news reporter with a sense of righteous indignation, an orphan named Charles Victor Szasz, and a faceless vigilante called “The Question,” who takes his righteous anger to the streets.

The Question is a flawed hero, unsure at times of his own motivations. He’s not a Batman. He wants answers. He’s angry. He’s curious. He’s violent when he has to be. And sometimes when cooler heads would have prevailed.

It’s exactly the kind of character that Greg Rucka excels at writing. Rucka has gone on record as a big fan of O’Neil’s take on the character, but a compliment alone doesn’t mean a writer can follow suit.

As I said, The Question is one of the most idiosyncratic revamps I’ve ever seen, perhaps this side of a total reinvention of a character, as with Neil Gaiman’s take on The Sandman.  After O’Neil’s series ended, the Question popped up in different places, but he was usually reinvented. Or a pale imitation.

And so, I thought, we will never see the O’Neil version of The Question again.

There’s a zen parable referenced in the original O’Neil run about a man hanging from the edge of cliff on a vine. He’s about to fall. He sees a strawberry hanging from the vine. He tastes it. Savors it.

That’s a bit how it is with comic book runs that you love. They may not last. So you learn to savor the moment.

And I did. And that was that. We’ll always have Hub City, right?

Charlie Szasz showed up at the end of the first issue.

And it was him.

Greg Rucka figured out how to take this character, this incredibly personalized version of a company-owned character, and he nailed the voice. In this mini-series, which in my mind will forever be a Huntress/Question miniseries, the faceless one returns — no longer as the flawed student, but now as the teacher to another flawed hero, the Huntress.

The search for identity, the zen spirituality, the acerbic wit… it all plays out flawlessly.

A few years later, Greg Rucka would kill Charlie in the pages of the weekly DC Comics series, 52. And you know what? I was okay with it. The story, threaded between many other stories in this mosaic serial, saw Vic Sage die of cancer, while passing along his mantle and some of his teachings to another flawed hero, Gotham City Police Detective Renee Montoya.

We only get a bit of the Montoya Question, but for my money, she is the perfect legacy — from Vic to Renee, from Denny to Greg.

And, for what it’s worth, while short-lived, Renee gets a couple of memorable stories.

The Question: The Five Books of Blood was a tie-in to the Final Crisis event at DC, but it holds up remarkably well in a re-read. Renee is a bit different from Charlie — as she should be. He was an orphan and a reporter. She’s a cop, a recovering alcoholic, a lesbian. Both characters search for answers, for identity, for some larger sense of understanding — sometimes (okay, often) violently. The Five Books of Blood sees Montoya investigate a bible dedicated to sin. The first part of the series sees her driven to uncover the secrets of this book. But as she gets in deeper, we begin to see the ties to Charlie — the need to understand, the depths of self-harm one will go to to discover the answers she thinks she needs. Tot Rodor, Myra Fermin, and Izzy O’Toole, three characters from the original O’Neil run all make appearances in this series. And they are all true to form.

Finally, we get one more storyline. The Question: Pipeline was a series of short backups, written by Rucka and illustrated by Cully Hamner, that ran in Detective Comics. The trade collection even uses the classic Question logo, tying it neatly to the O’Neil legacy. “Pipeline” sees Montoya with a new status quo, working from a lighthouse with Tot Rodor as her partner… the ghost of Charlie never far from either of them.

I really wish we got more of this set-up. Re-reading this now, it screams for a series. But you know, I’m glad we got what we got. Because after the O’Neil series, I mourned my Vic Sage. I figured he was gone for good.

And then Rucka resuscitated him. And gave him his own legacy. And I got to spend a bit longer than expected, hanging on edge of that cliff, tasting that strawberry.

Update: I wrote this piece prior to learning that Greg Rucka and Cully Hamner are returning to write and draw the Renee Montoya Question in a new 2-part mini-series spinning out of DC’s upcoming Convergence event. I’m sure you can imagine how I feel… hanging out on that ledge and… oh, hey, there’s another strawberry!