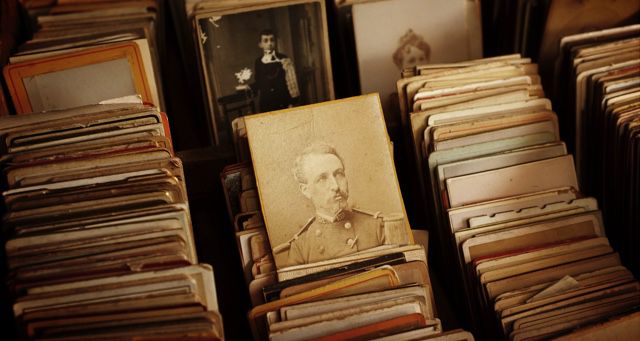 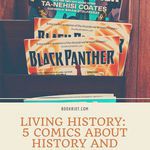 I hate when people declaim on comics and graphic novels not being “real” books. They have words, they tell a story, they evoke emotions; they are, therefore, books. Full stop. I say this not only as a rando human who writes about comics but also as the mother of a former reluctant solo reader: my now 9-year-old has always loved being read to, but we had a hard time engaging him with books on his own until we started handing him graphic novels. He will now read any GN you put in front of his face and has recently started to branch out into prose novels and history books.

All this to say, please don’t look at the GN in my kid’s hands, or in mine, and ask why we’re not reading a real book.

Remember too that comics/graphic novels aren’t a genre; they’re a medium that can be used to tell as many different kinds of stories as exist in the human mind. It’s not all capes and tights and, increasingly, there aren’t cowls or oddly shaped boomerangs to be found on the pages. Graphic memoirs, histories, and historical fiction are gaining in popularity and are being used increasingly in classrooms to great effect, helping both casual readers and students live history while reading about it.

Some examples? But of course! 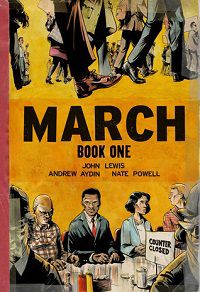 John Lewis is a congressman now. When he was younger, however, he was a Civil Rights activist who endured violence and hatred. Who was arrested more than 40 times in his nonviolent quest for equality. Only 23, he boarded a bus with other Freedom Riders to take the fight to the Deep South, knowing full well the challenges the group would be facing upon arrival, knowing they were risking their safety, and their lives, to affect change. At 25, Lewis participated in the marches from Selma to Montgomery as well as the march on Washington with Doctor King.

In choosing a graphic format for his story, Lewis gives the reader not only an eyewitness account of these massive historical moments but the opportunity to engage with them, and with him, to see history through the eyes of a man who lived it. A great gift indeed. 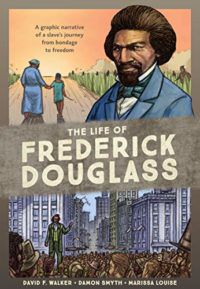 The Life of Frederick Douglass: A Graphic Narrative of a Slave’s Journey From Bondage to Freedom by David F. Walker, Damon Smyth, and Marissa Louise

Walker talked about writing The Life of Frederick Douglass on a panel at Emerald City Comic Con a couple of years ago. The graphic format was particularly important, he felt, so that Douglass’s life would be accessible to anyone who wanted to learn more about Douglass, no matter their reading ability, level of education, or history as readers. It was especially important for students of color who, he reminded the audience, often have less access to education/quality education but deserve, and need, to engage with cultural memory.

The comic’s script is based on Douglass’s autobiographical writings so readers have the opportunity to hear from the man himself. “Special features” throughout the narrative provide context for Douglass’s story, including: the history of slavery in the United States, the development of photography (which was key in spreading Douglass’s image and influence), and the Civil War. 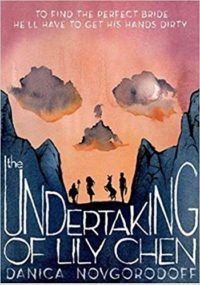 After his brother is killed in an accident, Deshi is sent to collect a corpse bride to accompany said brother in to the afterlife. I knew nothing about the corpse bride tradition until I picked up this gorgeous, atmospheric graphic novel and devoured the story of a man trying to be a dutiful son only to fall in love with a woman he may have to murder to fulfill his obligations.

Though more historical fiction than straight history, Undertaking set me on the hunt for more information, serving as an impartial jumping off point for me to learn about a culture not my own. It takes a very special book to engage readers to that degree, with pictures or without.

They Called Us Enemy is a graphic memoir, a subset of comics history that seems to be growing exponentially. Why choose it over a thick, shiny tome? Again, the graphic format allows the reader to engage with the writer on a very personal level, allows the not only to hear about but to participate in intimate moments from which prose alone would distance them.

The graphic format also makes it more difficult to ignore current parallels to historical events. Read this book and then watch the news: what do you see? I see the United States making the same mistakes it made 70 years ago driven by the same paranoia, xenophobia, and racism. And I’ll remember that when I have a chance to make it right. 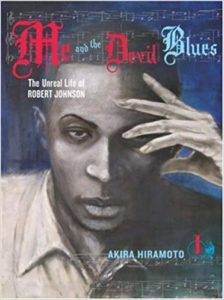 Me and The Devil Blues: The Unreal Life of Robert Johnson by Akira Hiramoto

I was last week years old when I learned there was a manga adaptation of blues musician Robert Johnson’s life story. There are various interpretations of Johnson’s claim he sold his soul to the Devil: one is that he chose to play secular music rather than religious, often dubbed, “selling your soul to the Devil.” The second is that white people labeled all black musicians “Children of the Devil” during that period in question. The last, and most famous, is that, in exchange for musical talent, Johnson literally traded his soul to the Devil (or the Orisha Legba) at a crossroads (or in a graveyard) at midnight.

Johnson’s death and its report are notable and more than a little weird: he died at 27 (and is perhaps the progenitor of one of rock & rolls most enduring myths; see The 27s: The Greatest Myth of Rock and Roll) of unknown causes but his death was never publicly reported; no one even knew he had died until a historian researching Johnson found his death certificate three decades after the fact. Various causes of death have been speculated upon, including: congenital syphilis, poisoning by a jealous husband, and aortic dissection as a complication of Marfan syndrome (Johnson had disproportionately long fingers and “one bad eye,” physical markers of the congenital disorder).

And of course, there’s the theory he was torn apart by hellhounds at the behest of their master.

Hiramoto’s books learn hard on the supernatural stories that have grown up around Johnson but don’t mistake myth for fantasy. There’s always some truth to legends and a reason some vanish while others, such as Johnson’s, endure. Am I saying he sold his soul to the devil? Not exactly. But there’s a reason that’s the story everyone knows and the one so many choose to recount in various formats.

Warning: use caution when Googling Hiramoto. Not all of his art is kid-friendly and also, now I have to bleach my eyeballs.

Go forth. Learn stuff. Find a new hobby, a new passion. Let the pictures craft the person. Pass along what you have learned and the books you learned it from, real books, one and all.