Welcome to another installment of Boy vs. Girl, in which we (Marisa Atkinson and Casey Peterson) read and debate new books at least one of us is really excited about. Now up: The Smart One by Jennifer Close. 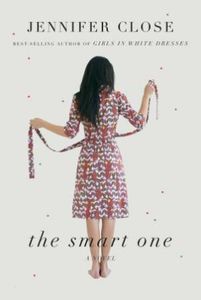 Marisa: Right off the bat, I think we can agree that you are not exactly the target readership for The Smart One, and probably would not have chosen to read it on your own.

Casey: Yeah, this isn’t a book I would have picked up if you had not selected it for April. It’s curious for you to say I’m not the target readership. Not that I disagree, but I’d sort of like to hear why you think that.

Marisa: I’m loathe to even say there might be a target readership for this, because I really don’t think books are or should be gendered or labeled in any sort of way. But I think this novel and Jennifer Close’s last book, Girls in White Dresses, are primarily concerned with the female experience, so it makes sense that her work will most likely resonate with a female audience, and that’s the audience that would be most attracted to it. But that’s the beauty of what we’re trying to do with Boy vs. Girl: read outside of our comfort zone!

Casey: Mission accomplished, because I did read it, even though I didn’t love it. But I didn’t dislike the The Smart One because it’s primarily concerned with the female experience. I disliked it for the same reasons I disliked Franzen’s Freedom: I was bored. It’s a well-painted portrait of life, but the thoroughness and attention to detail wore me down. Sometimes (this time) I need a plot.

Marisa: See, the detailing and attention to detail is what made this book for me! And I thought it had plenty of plot, and really interesting storylines that I haven’t already read a hundred times. Not to give much away, but every character–Weezy, Claire, Martha, Cleo–had a meaty storyline, and something major to overcome throughout the course of the book.

Casey: What made you pick this book?

Marisa: I picked The Smart One because I really loved Girls in White Dresses (which was told in the linked stories-as-novel format). I think that book perfectly captured that post-collegiate, pre-adult ennui, and I wanted to see what Close would do next, with more of a straightforward novel structure. I was not disappointed! I think The Smart One has such authentic, multifaceted characters and they really popped off the page and stayed with me. Yes, they were flawed, and often frustrating, and made questionable decisions often against their own better judgement, but isn’t that what makes a story compelling? I don’t want to read a novel about perfect people who always make the right decisions and live happily ever after.

Casey: This was the book’s victory for me: Close does a great job of creating these protagonists. They had depth, they were distinct from each other, and their motivations were believable (to the point where their actions became predictable [a success]). They were so authentic, that it kept me from feeling any real sympathy for these characters and their choices. I was frustrated (by them and for them)!

Marisa: For me, feeling frustrated with the characters and the fact that I cared so much about the choices they were making was how I knew I was really into this novel. The characters felt like real people and I was invested in them completely. For example, I know we’re not supposed to like her, since she’s helpless and a victim and makes constant excuses for not doing anything with her life, but I had a real soft spot in my heart for Martha. (Maybe it’s because I too wish I worked at J. Crew? The scenes of her folding tops and pants had an eerily calming effect on me…) In all seriousness, though, I think it’s because Martha had grown the most by the novel’s end, and I was really rooting for her.

Casey: Did she? I don’t know if any of these characters grew.

Marisa: I’ll give you that she didn’t do a complete 180, but when we meet her she’s in complete stasis. And by the end of the novel she may not have made significant changes in every aspect of her life, but she’s let go of some of the goals and values she’s long outgrown and is moving forward into a more realistic and attainable version of her life. Even though I felt like Claire was set up to be more of a focal point in the novel, Martha stole the show for me.

Casey: I’m not sure if we were meant to like any of these characters. I don’t even know if Close liked her characters. I never felt like she was mollycoddling these women. It was an honest voice, though. Like a friend who’s removed enough from any given situation to really call someone on their bad choices. You know?

Speaking of choices, who’s the “smart one” of the title? Each character, Claire, Martha, Weezy, and Cleo knew better. But they kept on with their damaging behavior. Not very smart, if you ask me.

Marisa: Being “smart” is a huge running theme throughout the book. We’re often hearing a refrain of “she’s smarter than this,” “she’s so smart,” and at one point Weezy refers to herself as “the smart one” in comparing herself to her sister, who is “the pretty one.” I don’t think any of these characters are literally the “smart one.” I think it’s meant to be a little bit tongue-in-cheek. The point is that they all have the potential to make smart choices (and more often than not are even aware of what the smart choices/decisions are), but they choose otherwise.

Casey: Yeah, it’s probably tongue-in-cheek. Martha certainly is held up as “the smart one” by Weezy, but her actions sort of belied that title. Claire thinks she’s “the smart one,” but her choices were self-destructive.

Marisa: Did you notice at the end of the book that Weezy says of newborn Nina, “Oh, she is so smart.” It’s starting all over again with the Coffey’s new generation…!

Casey: Books like The Smart One are why we started Boy vs. Girl: We’re reading things we probably wouldn’t otherwise. We’re expanding our bookish bandwidth. Occasionally (hopefully more often than not) we’ll pick a book that the other person will like (surprise!). The Smart One wasn’t the book for me, but Jennifer Close is a strong writer, and other people will connect with the well-drawn protagonists of this novel.

Marisa: Fair enough! But in case it wasn’t clear, I loved The Smart One as much as (if not more than) Girls in White Dresses, and it comes very highly recommended from me! The characters are still rolling around in my head. I feel like I owe Claire a call to see how her new job is going, or I should shoot Martha an email to see how the new condo’s coming together…