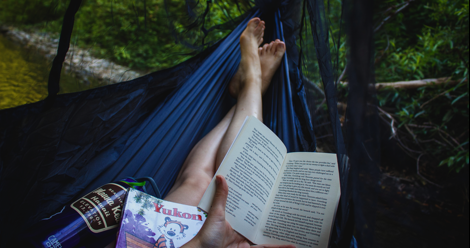 “Cecilia, have you read August’s book yet?” Sarah asks.

Sarah is the host of the Toronto Chapter of the Girly Book Club. She’s smart, successful, witty, and kind. Emphasis on kind. As in: will-tolerate-bad-writing kind.

(I suppose I should be thankful. She tolerates my bad writing, too.)

It’s still July, so I’m almost certain that I haven’t. But I am a part of more than one book club, so I ask her to refresh my memory.

“It Ends With Us,” Sarah says. “By Collen Hoover.”

“No, not yet,” I say. The “yet” is gracious, borderline fraudulent. I’ve seen a picture of the book on the GBC’s Facebook page and, though I appreciate the wisdom behind the adage involving books and covers, I’m pretty sure I won’t like this one. It’s fuchsia, with too-big font, and the cover art is of the smashed-flower variety. It looks like… fluff.

And I don’t do fluff.

I don’t mean to be a snob. I think people should read whatever makes them happy (be it Harlequin romances or poetry) – it’s just that fluff isn’t really my thing.

While I love the classics (Siddartha by Hermann Hesse, The Second Sex by Simone de Beauvoir, and Candide by Voltaire), my passion is contemporary fiction. Some of my favorite titles include Freedom by Jonathan Franzen, The Sellout by Paul Beatty, and God Help the Child by Toni Morrison. Over 80% of the books I read are considered literary fiction (I know this because I read on my iPad, and the Apple Store has a function that sorts out the books I bought according to genre).

“Then I have a copy for you,” Sarah says, walking towards her neatly stacked bookshelf.

I am sitting on her couch, drinking an ice-cold bottle of water. It’s a hot day (for Toronto standards, anyway). Sarah is wearing a pretty wine-colored dress. If she can sense my hesitation, she is too polite to say anything.

“It’s fluff,” Sarah says, handing me the book (and simultaneously reading my mind!). “But it has a twist. And once you get to the twist, you won’t be able to stop reading.”

I turn the book around to read the teaser. It’s worse than I anticipated. It seems like the sort of poorly written, plot-driven novel that is both exceedingly predictable and fantastically impossible.

Full disclosure: I love the GBC. It has given me some of my best friends in the world – and I don’t just mean of the ink-on-paper variety. But when it comes to picking out books they either hit it out of the park (Homegoing by Yaa Gyasi, The Unseen World by Liz Moore, and The Pearl that Broke its Shell by Nadia Hashimi) or they shoot themselves on the foot. With a machine gun. (I have too much respect for authors to list specific examples that would fall under the latter category.)

“It’s a quick read,” she says. (Sarah’s tone of voice is forever informing me that one can be both gentle and firm.) “Give it a chance.”

I agree to do just that. After all, the novel’s cover does boast the coveted accolade #1 New York Times Bestselling Author. Plus, Liane Moriarty is a brilliant author and The Husband’s Secret features a similar cover. Maybe I’m being too judgmental. I will read this, I decide.

Yet, weeks go by and I don’t touch the book. I tell myself that it’s because I’m busy reading The Glass Castle by Jeanette Walls and Difficult Women by Roxane Gay. But it’s not just that. I’m stalling.

One Saturday in August, Sarah and I go out to dinner. We are joined by another Sarah (yes, same name and spelling – it’s a Sarah Party!) and Joelle. The Sarahs ask me if I’ve read the book. I confess that I have not. Sarah D. (who is the non-book-club-host Sarah) gave it a lukewarm three-star review on Goodreads, but she still thinks I should read it (I suspect that it’s because she wants me to agree with her). Dinner turns into drinks, and drinks turn into dancing.

I wake up the next day with the mother of all hangovers.

The best medicine for a hangover is chocolate, coffee, and rest. I have a surplus of the items one and two, but resting is proving to be a challenge. I’m bored. There’s nothing good on TV, so I decide to read. Except my fuzzy mind is no match for the beautifully written prose of the books on my currently-reading pile.

So, I reach for It Ends With Us. I text the Sarahs as I read it. I try to guess the twist, and relay my general impressions. They encourage me to keep on reading.

I finish the 367-page book in a couple of hours. To be fair, I skim through a lot of it (don’t judge – hangover, remember?). It’s that kind of book: skimmable.

It’s… not great. Actually, it’s quite silly – and, given the serious topic that the book tackles (domestic abuse), it’s also a little disturbing. I liked that Lily (the main character) is strong, and that she rescues herself as opposed to relying on Atlas to do it. But, in general, there are too many coincidences and the epiphany that the character of Ryle has at the end is incompatible with his personality.

Yes, it’s very different from the books I’m typically drawn to – books that are so rich, one must read them slowly, cherishing every word. But different doesn’t (necessarily) mean bad. It Ends With Us served its purpose: it provided entertainment, distraction, and a surprise (alas, I did not guess the twist, which just proves that it wasn’t so predictable after all).

The lesson: books are like chocolate (another passion of mine). While Knipschildt Chocolatier’s truffles are second to none, they are not suitable hangover food – they are too exquisite to be devoured! The best thing for that just might be M&Ms. Because one does not feel guilty about binge eating M&Ms. It makes sense to binge eat M&Ms (it might be a requirement – I shall check the label).

It’s the same with books: sometimes, savoring words isn’t what we need. Sometimes, we need to wolf words down.

And, as I now know, there’s nothing wrong with that.

In fact, it can be quite satisfying.