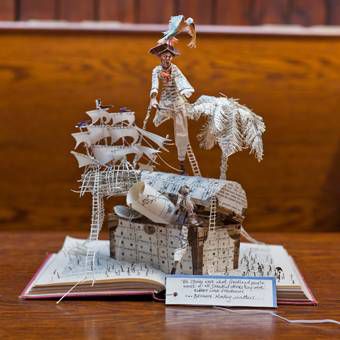 Millions of years after the world ends in late December 2012, alien archaeologists picking through the debris of humanity might come across traces of the earth’s final year. Amidst the flotsam and jetsam of K-Pop, Mobots, and kitten GIFs, the more literary inclined extra-terrestrial would conclude that our ancient extinct race enjoyed a final literary flourish before it was snuffed out.

Those were the final headlines in the book world. But if I may be so presumptuous, may I add a few more bits of news from 2012 that might not have been seismic, but in their own small way reflected the magic of reading.

Gaze upon these tales, xenomorphs, and hope that you have books on your planet too.

In June it was announced that Brazilian prisoners could shave four days off their sentences by simply reading a book. The Redemption Through Reading programme encouraged inmates to pick up a work of literature or philosophy. Why? “A person can leave prison more enlightened and with an enlarged vision of the world,” said Sao Paulo lawyer Andre Kehdi, who heads a book donation project for prisons. “Without doubt they will leave a better person.” Prisoners could read up to 12 books in the scheme. That’s 48 days of freedom, bought by reading. Sadly they couldn’t confirm whether the prisoners could read such jail-breaking classics as Papillon or The Count of Monte Cristo.

Books will change your mind

In May came news that was of no surprise to anyone who has read a book since The Iliad came hot off the press. Academics at Ohio State showed how a work of fiction can be so immersive as to affect how a reader behaves in real life. Subjects who read a short story about a character voting were more likely to be electorally active at the next polls. In another experiment, people who read a story in which a character comes out as gay towards the end were more likely to be sympathetic towards LGBT issues as a result. Researchers defined this as “experience-taking”. Or to the average reader, losing yourself in a good book.

January saw the introduction of the Great Gatsby Curve. Not a hip new 1920s-inspired dance move, nor marketing speak for the continuous false summit of a release date for Baz Lurman’s adaptation. Nope, the Great Gatsby Curve was invented by the chairman of the Council of Economic Advisors, Alan Krueger. It referred to a graph showing social mobility around the world. The Nordic nations rocked it, with Chile and Brazil flunking. The curve was named after Fitzgerald’s social climber Jay Gatsby, who went from being merely Jay Gatz, a bootlegger, to darling of the Long Island socialites. In contrast with the written word, on the graph the US was conspicuous in its inequality and immobility. Gatsby was obviously Scandinavian. 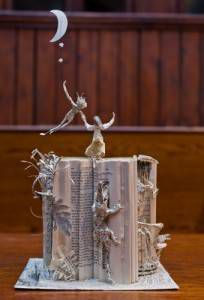 Books are works of art

Last year a mysterious and magical figure stalked the streets of Edinburgh, leaving beautiful sculptures made out of books around the city. They were love letters to the power of words and ideas, fantastically recast. The artist’s identity remains a closely guarded secret. In late November the artist was at work again, producing five new works for Scotland’s national book week. This time they populated the nation. Over five days clues were left online as to where they could be found. A Whisky Galore inspired sculpture appeared on the Isle of Eriskay, off the west coast. Peter Pan materialised in JM Barrie’s birthplace, Kirriemuir. Treasure Island (left) was found by a beach in North Berwick, near where Robert Louis Stevenson holidayed in the shadow of Bass Rock. And with each appearance the belief that books are in fact capable of magic deepened.