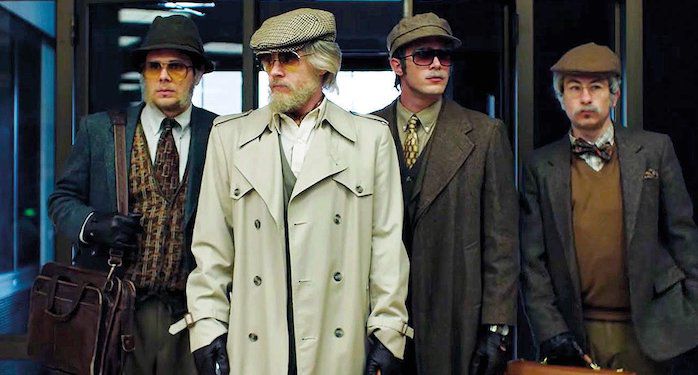 As far as I’m concerned, there are two kinds of movies: heist movies, and everything else.

It’s weird to admit you’re a fan of heists. It’s sort of like admitting you’re a fan of stealing. Because let’s face it: unless you’re George Clooney pulling off an elaborate ploy to stop the love of your life, Julia Roberts, from marrying a monster, most heists are for pretty greedy purposes. And even still, Danny Ocean walked away with $150 million. Split 11 ways, that’s still…(tries to do math)…a lot.

And yet there’s just something about heist movies that get the ol’ blood pumping. From the extravagant schemes to the shady characters to the something-always-goes-wrong-you’re-just-waiting-to-see-what-it-will-be tension of it all. For most of us who prefer to live on the right side of the law, the only way we’ll be able to truly experience a heist is through the vicarious experience of a good movie — or book.

If you’re a heist fan, here’s a list of heist movies that were inspired by literature — not just books, but works of journalism as well. Reading the source material can often heighten your enjoyment of a film, so jump right into these heist movies and live vicariously through people who would do things you would never do!

And, Hollywood: can we please, please get some more film adaptations of heist books that were not written by white men? Thank you!

Masterminds is a comedy film based on Heist: The Oddball Crew Behind the $17 Million Loomis Fargo Theft by Jeff Diamant. As someone who listened to the entirety of the audiobook, let me tell you that the story (which is all true) is indeed quite wacky. One of the biggest heists in recent history, the story centers on an unassuming North Carolina security guard who decides he wants a better life and tries taking it for himself. What follows is a twisty tale of cat-and-mouse, double-crossings, and assassination attempts from a colorful cast of outrageous characters.

Sofia Coppola’s 2013 film about a group of fame-obsessed teens who stole over $3 million in clothes and jewelry from Hollywood’s elite is based on a 2010 Vanity Fair column. Journalist Nancy Jo Sales then wrote an entire book on the story, which debuted alongside the film. The Bling Ring, starring Emma Watson, is now on Netflix.

Rififi is a French crime novel by Auguste Le Breton that was adapted in 1955 by filmmaker Jules Dassin after he was blacklisted from Hollywood. The heist itself depicted in the film lasts half an hour and is shot without dialogue or music. Imagine that — a visual medium using nothing but visuals to tell a story! They just don’t make ’em like they used to.

American Animals is one of the most innovative movies I’ve seen in the last five years, much less one of the best heist movies in recent memory. Filmmaker Bart Layton interweaves a film about four college friends who attempt to steal a rare book from their college library with interviews from the real-life people portrayed onscreen. The result is a tense, shocking, and really quite emotional film. Eric Borsuk, one of the men involved, wrote the true crime memoir on which it’s based.

With an impressive cast led by Jennifer Lopez, this splashy heist movie is based on a 2015 New York Magazine article by Jessica Pressler. The story follows a group of New York City strippers who decide to turn the tables on their wealthy Wall Street clients by drugging them, stealing their credit cards, and running up charges. Written and directed by Lorene Scafaria, the film was widely praised, with Rotten Tomatoes citing it as a career-best performance by Lopez. The stellar cast also includes Constance Wu, Lizzo, Cardi B, Lili Reinhart, Keke Palmer, and Julia Stiles.

This one might be slightly cheating, since it’s a Netflix series rather than a movie. But Shadow and Bone, which is adapted from YA novelist Leigh Bardugo’s Grishaverse, mixes together characters from the original trilogy and a follow-up duology she wrote. And Six of Crows, the first book in that duology, is all about a team of crooks coming together for a major heist. While this series is not a straight adaptation of that story, it will introduce you to the world, and hopefully there will be more seasons set in the Grishaverse coming.

Ben Affleck’s directorial debut about a gang of bank robbers putting together one last score (it’s always one last score, right?) at Fenway Park was adapted from a 2004 Chuck Hogan novel called Prince of Thieves. The tense movie, which also stars Rebecca Hall and Blake Lively, solidified Ben Affleck’s career as a director and garnered an Oscar nod for a pre-Avengers Jeremy Renner.

No, it’s not the one you’re thinking of. This is a completely different train heist movie. Long before he gifted the world with Jurassic Park, Michael Crichton penned a 1975 historical novel called The Great Train Robbery. It’s based on real-life events, in which four men stole over 200 pounds of gold on a shipment between London and Paris in 1855. Crichton also wrote and directed the film adaptation, which stars Sean Connery, Donald Sutherland, and Lesley-Anne Down.

This Brad Pitt/James Gandolfini vehicle contended for the Palme d’Or in 2012. Not so much about a heist as its aftermath, Pitt and Gandolfini play two hitmen hired to go after three criminals who have the spectacularly bad idea of robbing an illegal poker game and pinning it on the organizer. The crime novel on which it’s based, Cogan’s Trade, came out in 1974, but the film’s backdrop is the 2008 financial crisis and the U.S. Presidential race.

What’s fun about heist movies is all of the different twists you can put on it. Case in point: Coin Heist, a 2017 Netflix film adapted from the YA novel of the same name. Rather than a group of hardened criminals pulling off “one last score,” Coin Heist is essentially the Breakfast Club pulling off a robbery to save their high school. A nerd, a slacker, an athlete, and a straight-A student attempt to take $10 million from the U.S. Mint while on a class trip to make up for a funding shortfall at their prep school.

The Hot Rock is a comedy crime novel from Donald E. Westlake. It was the first appearance of his popular criminal protagonist John Dortmunder, who eventually featured in a total of 14 novels and 11 short stories. William Goldman, known for The Princess Bride and Butch Cassidy and the Sundance Kid, wrote the screenplay adaptation. The film doesn’t feature just one heist but several, as things for Dortmunder (Robert Redford) and his crew consistently go awry, and they have to steal a precious diamond again and again until they get it right.

The Old Man and the Gun

Speaking of Robert Redford, he announced in 2018 that he intended to retire from acting at the age of 82. The Old Man and the Gun, based on a 2003 New Yorker article by David Grann, was heralded as one of his final film appearances. In it, he plays aging bank robber Forrest Tucker, a man who can’t seem to give up his life of crime. Tucker falls for a woman named Jewel (Sissy Spacek) he meets while evading police. He then goes on a series of heists in order to pay off the mortgage on her farm. Of course, Casey Affleck’s FBI agent isn’t going to let that stand, so Tucker is faced with the question of how much longer he can outrun his past.

Donald Westlake was a prolific crime writer. In addition to his John Dortmunder novels and stories, Westlake also wrote several more serious crime novels under the pseudonym Richard Stark. One of those books, The Hunter, is the first in a series about a career criminal named Parker. It was turned into a movie twice — once in 1962 starring Lee Marvin, and in the 1999 action thriller Payback with Mel Gibson. After being double-crossed over $70,000, Porter (named changed for the movie for some reason) goes after — well, you guessed it — payback! The film also features Maria Bello and Lucy Liu.

Ossie Davis wrote and directed this 1970 comedy film based on the novel by Chester Himes. Himes’s popular Harlem Detective series in the ’60s was largely responsible for launching a wave of Black cop-and-detective stories. In the film, which stars Godfrey Cambridge and Raymond St. Jacques, two detectives attempt to track down a group of armed robbers who steal $87,000 in donated cash and stash it inside a bale of cotton, which then falls off a van and goes missing on the streets of Harlem.

In case you’ve somehow been living under a rock since 2001, Artemis Fowl is a beloved series of middle grade books about a 12-year-old genius and criminal mastermind. The long-awaited movie, which premiered on Disney+ last June, disappointed most fans as an adaptation, but it still has some great heist elements, since the plot centers on the theft of several priceless artifacts.

If you loved a particular heist movie OR love reading books about heists, sign up for TBR to find great new book recommendations, tailored just for you!