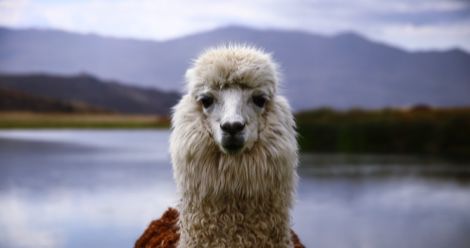 I saw The BEST “genre label” in a bookstore the other day:

Of course, you have to read it to sound like “rama lama ding dong,” in that 1950s music kind of way. The only thing preventing this from being my ultimate all-time favourite genre label was the distinct lack of books about llamas. *shock* I know, right?!? I expected at least one romance novel with the ultimate trope-y characters and plot.

So, what’s a book-loving girl to do? Start a healthy search for MORE books about llamas (and I know I’m stretching the word “healthy”). But before I share my list, I need to let you know two important things.

One: I’m really disappointed in the lack of diversity in voices for this topic. Given it’s a fairly niche section I was looking at, I shouldn’t be too surprised, but I was expecting more. If you know of any, please let me know in the comments.

Two: I was pleased to see llamas included across different genres of books. Still not enough of the college llamas falling in love with the alpaca football team and trying to avoid the tequila-spiked punch, but hey. I’ll take what I can get. 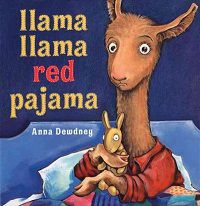 This is possibly the most well-known of all books about llamas, ahead of any official resource material on the subject. Anna Dewdney has left behind a legacy of llama-love with her extensive collection of children’s books. She’s not the first to jump on the alliteration and rhyming power of llamas but her Llama Llama series are so adorable and easy to read. 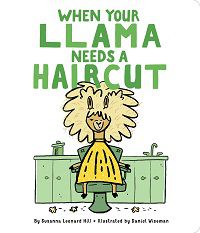 Have you ever stopped to think about llamas with bad hair days? After reading this book with my five-year-old, I don’t feel so bad. It has now become the go-to book for her to read while I try to brush her hair in the morning. I’m yet to master her requests but at least we have some inspiration. Preschool kids love this book for its silliness and simple illustrations. 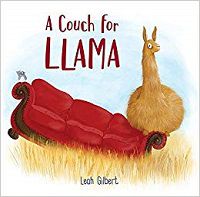 A Couch for Llama by Leah Gilbert

Imagine if someone dropped a couch in your backyard. Probably not such a bad thing, IF you knew what a couch was. It may not be quite so obvious to a llama in the field; is it food or friend or something completely different?. This is a great book for exploring how we look at our personal items, and how we compare to others looking at the same thing. 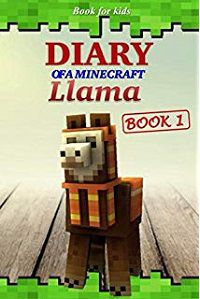 Diary of a Minecraft Llama by Ender King

Our household goes through Minecraft phases, usually aligned with a new update or book. For example, llamas. My 12-year-old is planning his own holiday to Ecuador next year (with his dad) and he is now building a Minecraft world filled with llamas. Maybe I should have put this book under the Learning with Llamas subheading…It has definitely inspired some great learning through Minecraft. 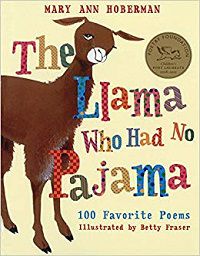 The Llama Who Had No Pajama by Mary Ann Hoberman, illustrated by Betty Fraser

This is a delightful anthology of poems and a fantastic way to introduce kids to poetry. There are 100 poems in total, covering many different topics and concepts. Most of the poems are about animals and nature, with a few serious poems peppered amongst the predominantly humourous. It is at its most enjoyable when you read it in short bursts of poetic illumination. 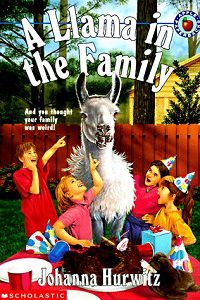 A Llama in the Family by Johanna Hurwitz

Confession time: who wants a pet llama in the family? Here is the perfect book for seeing exactly how a llama could fit in to the family. Perfect for kids around grade 3, it is easy to empathise with the family life and be drawn into the developing bond between people and their pets. Awwww…It’s so sweet. Team this with any reference books about llamas and I cannot be held responsible for your pet choices. 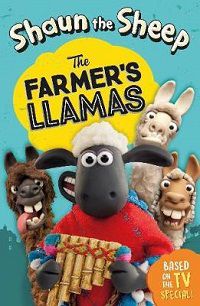 Shaun the Sheep: The Farmer’s Llamas by Martin Howard and Aardman Animations Ltd

Based on the hit TV series (and a favourite with my kids), this book is a direct retelling of the episode by the same name. When the Farmer brings home three llamas, Shaun’s mischief is only encouraged by the new additions. It’s a junior novel filled with full-colour stills from the episode…and I have never wanted a llama AND a sheep so bad. 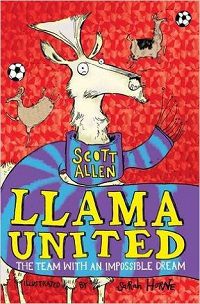 Llama United: The Team with an Impossible Dream written by Scott Allen and illustrated by Sarah Horne

For young football fans, with just enough crazy magic to make it fun! We have 11 llamas who accidentally eat the ashes of one of the greatest footballers of all time and *OMG* they suddenly become one of the most talented football teams of the century!! It’s a whole heap of absolutely ridiculous fun but that’s what makes it so entertaining for kids. Okay, and some parents too. 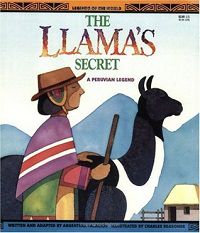 I absolutely love comparative folklore and mythology, so I couldn’t resist this Peruvian rendition of the ‘Great Flood’ story (every culture has one). This time, it is a llama who warns the people and animals to seek shelter on Huillcacato to avoid the rising sea, Mamacocha. Bonus points for the soft sense of community and encouragement, as part of the cultural nature of Peru. 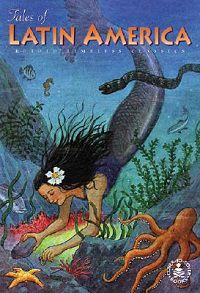 Okay, so this doesn’t exactly fit the topic of ‘books about llamas’ but it does have the sweetest tale, “The Llama Herder and the Daughter of the Sun”. All five stories in this book come from Mexico and South America. It is a really easy to read book to introduce some South American culture to the kids. 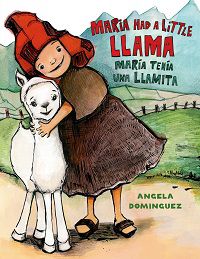 This is perfect for bilingual kids learning Spanish and/or English; it’s a fresh look at the old classic Mary Had a Little Lamb. I love how it offers the story in both English and Spanish, with lovely illustrations to portray the visual life in the Andes. It’s kind of whimsical…just as I imagine llamas to be.

I Llike the Llook of Llamas 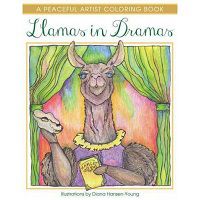 I totally adore this book, with all its fabulous hand-drawn pictures of llamas in famous theatric and cinematic performances. Finally I can colour my perfect Shakespearean world, filled with llamas. 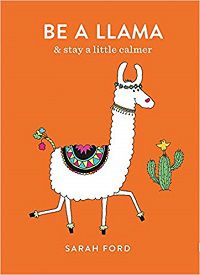 Be a Llama & Stay a Little Calmer by Sarah Ford

“Never in the history of calming down has someone calmed down by being told to calm down.” However, if they had this little book, they might have had a fighting chance. It’s cute. It’s bite size. And it’s just the thing I need to flip through at my desk when the crazy of the world becomes a little overwhelming. 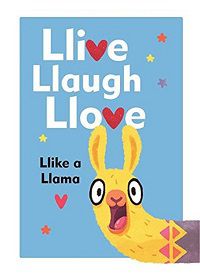 You absolutely need to check out Alena Tkach’s artwork right now. Her fabu-llama book is an ode to the warm and snuggly llama we all love and need right now. It is filled with 100 encouraging and positive insights into the wisdom of llamas. And if you llove the llamas, you are going to go absolutely nuts over her other illustrations. She does game artwork too!! *swoon* 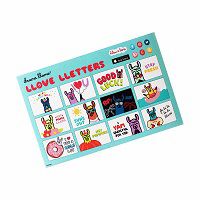 Speaking of swooning, I am a sucker for postcards and books of postcards. It’s my thing, okay? And if it’s your thing too, then you’ll love this book of llama postcards. There are a few different themes out there but the Llove Lletters set is my fave; don’t tell hubby but I am sending him one each month starting in the new year. 😉 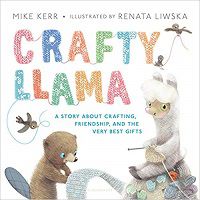 This book is perfect for the kids who are forever creating something, and sharing their gifts with loved ones. The artwork is soft and inviting, and the message is encouraging for all the crafters out there. Llama makes things that are lovely, and Beaver makes things that are useful. And what do you know? Sometimes you can do both at the same time. 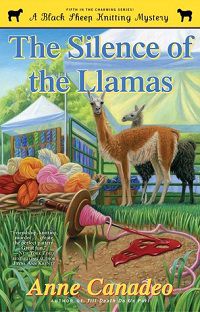 The Silence of the Llamas: A Black Sheep Knitting Mystery by Anne Canadeo

Given this is the fifth book in a series of seven, I was more attracted to the title then the series. In keeping with the knitting theme of the series, the book also includes recipes and knitting ideas. The ‘Black Sheep Knitters’ attend a festival and end up investigating an attack on the local llamas. Warning: The story includes detailed abuse of animals, leading to retaliation amongst the human characters.

Llearning with books about Llamas 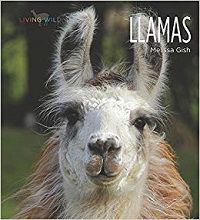 If you’re looking for education reference material specifically about llamas, this is a nice thin book aimed at kids. Gish has published a few books in the same style; including jellyfish, camels, beavers, and jaguars. This book looks at the habitats, physical details, and the relationship between llamas and humans. Great starter for resource books about llamas. 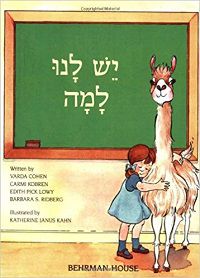 Highly recommended education book, using llamas as the motivator for learning Hebrew. All of the educational elements are delivered purely through storytelling, without any of the dragging ‘drills’ or lessons. I’ll be honest: This was a surprising treat to find amongst the books about llamas. 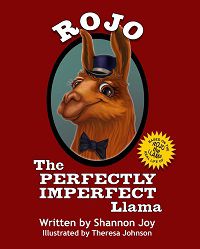 For books about llamas, you can’t go past a book about the most gentle llama of all: Rojo, a therapy animal in the United States of America. Initially, Rojo seemed to defy all the ‘usual’ characteristics of a llama, and the common training techniques achieved zero results. Fortunately, his kind nature was recognised by a kindred spirit and recommended Rojo for therapy animal training. A lovely story about being different and finding your own path.

And the ONLY Drama Llama Rom-Com 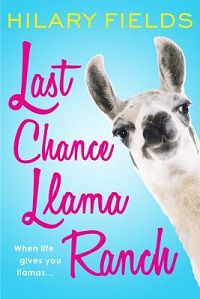 I love the start of this book: Merry (the main character) pictures the life of a travel writer to include glamours trips to exotic places…and then her editor assigns her a trip to a llama ranch. *bwahahahahaha* Oh, we’ve all been THERE! And when I say there, I’m talking about the writing assignment and not the llama ranch with total fluff and weird AF characters throughout. This one is definitely for the Drama Llama Rom-Com shelf!

After completing this list, I am now looking for MORE books about llamas. Please share your favourites in the comments and let me know what I’m missing!