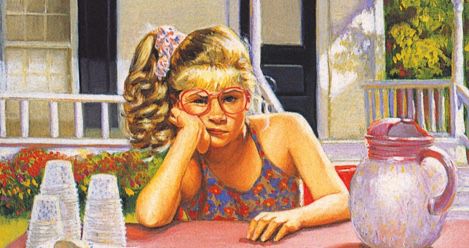 Excuse me for a moment while my inner child squeals with giddy delight. But the BSC Little Sister series is going to be turned into graphic novels and I am super gigondoly excited. I have loved the BSC graphic novels by Raina Telgemeier and Gale Galligan, and I am very happy that the BSC universe is getting more graphic novels. The Little Sister series, which was launched in 1990 following the success of The Baby-Sitters Club, consisted of 128 titles focusing on one of the minor characters from the BSC: Karen Brewer, Kristy’s younger stepsister who had a big imagination and a lot of ideas.

Did you hear the exciting news?! The Baby-Sitters Club Little Sister series by Ann M. Martin is being adapted into a graphic novel series by Kate Farina, and we can't get enough of the cover for the first book in the series, KAREN'S WITCH! 🎉😍✨

A post shared by Scholastic Book Fairs (@scholasticbookfairs) on May 6, 2019 at 5:10am PDT

The illustrator of this new series is Katy Farina who, like Telgemeier and Galligan, grew up reading the original series. The first book in the new graphic novel series is going to be Karen’s Witch, which will be published in December 2019. There are plans to publish two BSCLS graphic novels each year, with another one out in July 2020 and two more following in 2021. The pages of the BSCLS graphic novels will have fewer and larger panels on each page than the BSC graphic novels as they are aimed at a slightly younger audience — much like how the BSCLS books are shorter with larger font than the regular BSC series.

In related news, the seventh BSC graphic novel, Boy-Crazy Stacey, will be out on 3 September and I already have a countdown going. I cannot WAIT for all of these books! They will be dibbly fresh and are already two of my book highlights of the year.

This is on top of recent news that there will be audiobook versions of the BSC coming in August. Is there a better time to be a Baby-Sitters Club fan? No, I think not (well, apart from the ’90s when they were all originally published, I suppose).