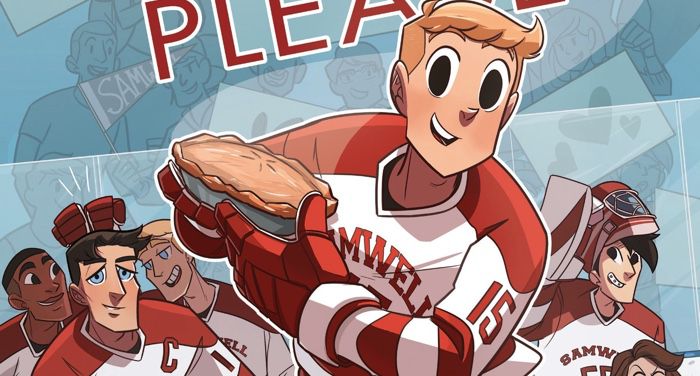 All right, friends. We’ve covered a lot of ground since we started this journey into second-tier comic heroes from lesser-known members of the galaxy, spanning Green Lantern Corps to that time Swampy left John Constantine with a tree on his butt to the librarians and smugglers of the far far away (the permanent gift that keeps on giving). We’ve even profiled loyal fire ferrets and long suffering cabbage merchants.

But what about the slice-of-life folx? Not all heroes wear capes.

I’m going to dive into the backlist this week because I just read the utterly delightful, couldn’t-put-it-down-until-I-finished, collected volumes of Ngozi Ukazu’s Check Please and I want to give the Samwell Hockey Team a much deserved shoutout.

There are still a lot of serious stereotypes where sexuality and sports are concerned, and the split by the social construct known as gender is just as dumb, and damaging, as the garbage remnants of outmoded homophobic bullshit: women in some sports are graciously permitted to be part of the LGBT+ family while men (with a few notable exceptions) are to be straight bros who bro with their straight bros and espouse support of their straight bros in straight bro manner.

Why is the Samwell Hockey team special?

First: they accept Bitty for who he is without his sexuality being a thing. He decides to come out in the context of his teammates flipping through their mental Rolodexes for ladies with whom they can set him up for a dance. He tells them he likes dudes. They switch to their dude Rolodexes without even blinking.

As someone who has come out several times in a few different ways, let me tell you that this ease, this comfort, this adaptation without a million questions is a rare fucking thing. “Are you a lesbian now?” No, I’m bi. “Wait, now you’re with a guy. You’re not a lesbian anymore?” Never was. “Wait, are you with your husband and your best friend?” No, that’s something different. “Do you want to sleep with her?” Being pan doesn’t mean I automatically want to sleep with everyone. “Have you told the kids?” Is it supposed to be a secret?

Anyone who says “Cool” and goes on with the business of finding their friend a date they’ll have fun with regardless of gender or genitalia deserves a damn medal.

Second: Not a single member of the team gets weird about the locker room, which is another stereotype that gets played for laughs on the regular but can actually be extremely harmful for LGBT+ athletes, especially younger members of the fam who are already dealing with an extra level of nonsense in many cases. Bitty is a hockey player. Before the game, he’s preparing just like everyone else. After the game, he’s winding down, just like everyone else. And hey, guess what! Being gay doesn’t mean he wants to bang every guy in existence. When various media go there, they endanger LGBT+ athletes who want nothing more than to do the sport they love. So how about, like Ukazu, we don’t.

Bitty is different and his friends embrace him for it. Even if they do miss the gross couch. Why? Their response is “why not?” which is how it should be. Being kind, being interested, being open to what other people love shouldn’t be an exception, it should be the rule. We shouldn’t be afraid of what we don’t know, we should embrace it. How boring would the world be if we were all the same? Kids get it. This group of college-age boys has somehow managed to hang on to that understanding. We should follow their example. And how often does anyone tell you to embrace your inner college bro?

And when Jack’s pro team, the Falconers, are given the same opportunity, they step up as well, which I have to think is probably not so far off the mark. The world certainly isn’t perfect, and if the past four years has taught us anything it’s that we have way further to go than some of us thought on the road of acceptance but, at the same time, maybe we have to give people a chance to show their best selves. That’s a terrifying proposition. But if the Samwell Team and the Falconers show us anything, it’s that folx sometimes step up when we least expect it.