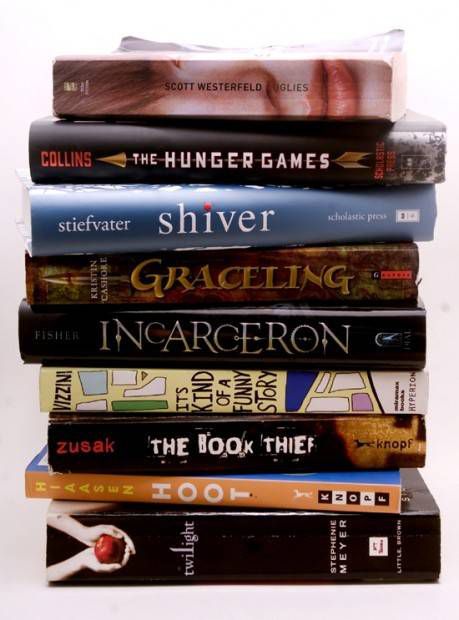 I think if I have to read one more confession from an adult who reads YA books, I might have to stop reading the internet altogether. Besides the fact that often these stories are littered with poor language choices (“an addict comes clean” is more suited to someone who suffers from alcoholism than someone who enjoys reading a certain type of book), these stories are little more than navel-gazing hit generators. Sure it feels nice to be validated that you’re not the only adult who enjoys a YA novel, but you’re only revalidating things to yourself and others who already accept and love YA books. Those who don’t like YA won’t be convinced, no matter how many confessions of this variety exist. Just read the comments for proof.

That’s not to say there aren’t opportunities to talk about YA in the mainstream, but let’s do it in some more interesting ways. I’ve got a few ideas of articles about YA I’d love to read or studies I’d like to see done when it comes to YA and its readers. Perhaps some of these exist and they’ve been buried beneath confessional click-getters. Perhaps they do not exist yet, but now, with YA enjoying a golden age with teen and adult readers alike, maybe it’s time to look a little deeper and offer some substance to the discussion of “why YA?”

We know that adults are consumers of YA fiction — Bowker found that 55% of those who buy YA books are over the age of 18. What I would like to see is some dissection of what this means when it comes to the books that continue to command space on the New York Times Bestseller List. Do teens play a role in what books end up on there? Are the books teens buy when they come out the ones which make the list for a week or two and then fall off? Is it adults that keep some authors on the list forever? Do adults help keep certain books and authors on the list because those are the books that are recommended to them over and over as places to start when starting to read YA? There is a lot to unpack here when it comes to buying power, to age of those buying books, and more.

2.  Adult Readership of YA and Subsequent Perception of Teenagers

This one is rich with avenues for exploration. Because YA books feature teen characters, they feature teen characters — they’re fraught with angst and emotion, raging hormones, with the inability to make rational decisions, with boundaries and limitations in what they can and can’t do when they find themselves in a tough situation. They are immature, which is something adult readers sometimes point out in reviews of YA books (as if they, as adults, are never themselves immature). Teen readers, because they are teens, will and do read these characters through a different frame of reference than adults do. Their cognitive abilities aren’t the same as adults’, and their world views are inherently smaller. In a lot of ways, teens may be frustrated with decisions the characters in YA books make, but ultimately, most understand why the characters did what it was they did, even if they didn’t like it.

But do adults process the stories in the same way? Are our perceptions as adults more critical and judgmental of the choices made or not made in YA books? Do we see the story through our adult brains and think that the YA character did it wrong and has set themselves up on a path for further failure through their adulthood? Or do we think about the choices we’d have made as teens and reflect upon whether or not we’d have done the same thing in that character’s situation? Maybe even more interestingly to consider is whether or not nostalgia for our own youth colors our perception, understanding, and judgment of today’s YA stories and teen characters.

Do adults who read YA have more empathy for teens — both those who are real and those within YA books? Or is it the opposite and they have less patience now, since their perceptions of teens are influenced by the stories they’re reading about teens in YA books? I find this last question particularly fascinating to consider because so many of those bestselling titles are about idealized teens. Who wouldn’t love Eleanor or Park? Who wouldn’t love Hazel or Augustus? Yet, these characters are in the midst of significant stories and don’t reflect the vast majority of real teen experiences in the everyday world.

Similar to the point above, I’d love to read about how the influx of adults reading YA may or may not translate to adults reading YA with the teenagers in their own lives. I’d love to know how the sharing of story impacts not just their abilities to talk about plot and character and the take aways of a given book, but I’d love to know whether or not that shared reading experience has influenced their relationship more broadly. Are they sharing favorite reads with one another? Are parents who are reading “tougher” YA passing it along to their teens in hopes of spurring rich discussion? Or as a means of exposing their teens to harsh realities in a safe way? How does reading these books influence the bigger, important conversations during adolescence?

How often are teenagers choosing to hide what it is they’re reading from their YA-loving parents? Is there a need for privacy and if so, how are teens finding it in their reading? Is having a parent who loves books geared toward them frustrating because it means they can’t have a space of their own? When does involvement become too much?

4. The Influence of Gender on Reading

There is so much talk about gender and reading. Broad claims that boys aren’t represented in YA bubble to the top, and over and over, we hear about “books for boys” and “books for girls.” These topics are well-worn and boring. I think it’d be fascinating to take them somewhere further, with actual evidence.

I’d love to know whether gender of the main character of a book or gender of the author of a book actually impacts reading experience. Do girls tend to judge female characters in a way that boys don’t or vice versa? I’d love for, say, a teacher to copy the first chapter of a book about a female main character and the first chapter of a book about a male main character (and the same can be done with any variety of gender variations with authors, too) and ask teens a variety of questions about those chapters. Ask them how they’d describe the main character. Ask them about the choices the main character’s making. Ask them to predict how the character will act or react as the story goes on. Then ask the teens to identify as male or female (or neither or both). Considering the answers given against the gender information gathered would offer a wealth of interesting data. Do girls judge other girls more harshly? Do boys or girls consider “likability” when defining a character and does it emerge more as a trait when the main character is female or male? Do boys really find girl stories of no value to them? It’d be fun to give those readers a particularly “controversial” passage, featuring teens who are having sex or partying and have them consider how “bad” or “not bad” those scenes are and how likely they themselves are influenced by them. Replicate this with adult readers of YA.

Perhaps we’d know a little more about the true influence gender does or doesn’t play in experiencing story.

If we want to make a point about the value of YA fiction, let’s get beyond our own personal confessions. Because you’re never going to change the hate of the haters, how about instead offer something insightful and impacting to those who already know the truth, rather than a simple validation.