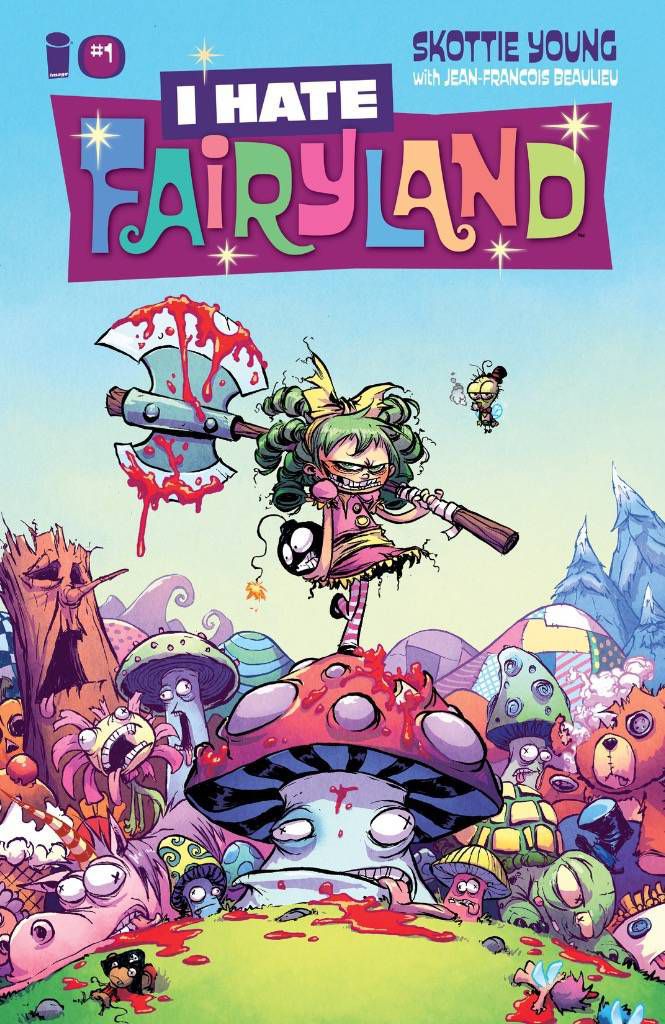 I Hate Fairyland #1, cover by Skottie Young and Jean-Francois Beaulieu

Almost every kid wishes she could be whisked away to a magical land—how I wanted to find that magic wardrobe to Narnia!—but in his new series for Image Comics, I Hate Fairyland, Skottie Young suggests we should be careful what we wish for, to hilarious effect.

To its credit, the story starts quickly. The first panel states that Gertrude (Gert) “wished she could be taken away to an amazing world filled with wonder, and magic, and laughter, and joy”, before an unexplained portal to Fairyland opens up and Gert falls in.  The whole prologue showing Gert’s arrival in Fairyland lasts five pages before we jump ahead 27 years to find her still stuck in Fairyland and becoming increasingly homicidal as a result. There’s no decompressed back story here: just the absolute essentials to set the stage for the comedy violence to come.

And, yes, if the cover didn’t provide enough warning: Young fills I Hate Fairyland with violence, blood, and guts. The issue earns its M rating: Gert kills on a literally astronomical scale—even resorts to eating a patrol of mushroom police (“They’re totally alive and I’m eating them all! Haaa!”)—and Young illustrates it in gruesome detail with Jean-Francois Beaulieu’s vibrant colors.

The art is what one would expect having seen Young’s earlier work (especially his Little Marvel and Oz books), but with more violence and cartoon physics. In his afterword to the issue, Young states that he was first brought to comics through Mad Magazine, and it’s easy to see its influence in tone (the issue feels in many ways like a Mad parody of a fantasy movie), but Young’s artistic style is more evocative of a classic Looney Tunes cartoon or an episode of The Ren & Stimpy Show (just look at Gert’s eyes and tongue as she is falling to Fairyland). The style meshes perfectly with the irreverent, hilarious tone of the book.

Story-wise, the issue reads much like Young’s Rocket Raccoon: the plot is mostly there as a setup for individual scenes. While potentially frustrating long-term, this picaresque style works well in this first issue; since Fairyland is an inherently illogical place, why should there be any logic to what Gert does or where she goes next? (The upside is that forgetting details about what happened last month—or months ago, in the event of a longer hiatus—should not be a big deal.)

This is not to say that the series has no broader narrative. Gert is, after all, looking for that key home; Queen Cloudia is trying to get rid of Gert by any means necessary; and things that happen in-story have a lasting effect, seen, for instance, with Gert’s teeth, which were damaged in her fall to Fairyland. But, Young does not impose a complicated mythology where one is not necessary and, I suspect, he will not be bound with continuity where it interferes with a good joke.

Overall, I loved the issue. It had me literally laughing out loud in several places, and I have so many screen captures saved for future use on Twitter. While perhaps not quite as fun as the best issues of Rocket Raccoon (I’m thinking of the Groot-narrated Rocket Raccoon #5, in particular), it has that series’ rebellious spirit. I am definitely looking forward to Gert’s further adventures in Fairyland, even if she is not.