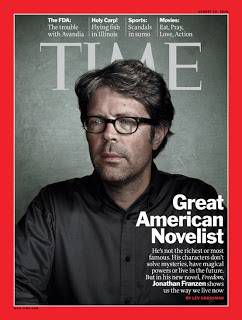 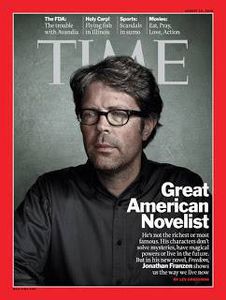 That headline manages to insult fans of crime, fantasy, and science fiction all in one swipe!

In August of the Year of Our Lord Jonathan Franzen 2010 (That’s got to be how he measures time, right?), TIME Magazine put ol’ J-Franz, framed like he was posing for a presidential portrait, on its cover behind the bold lines, “Great American Novelist: He’s not the richest or the most famous. His characters don’t solve mysteries, have magical powers or live in the future. But in his new novel, Freedom, Jonathan Franzen shows us the way we live now.”

Cue blowback. Many were incensed by (A) the idea that Franzen is the or even a great American novelist, (B) all the hoopla surrounding Franzen generally or Freedom specifically, (C) the seeming reaffirmation that male novelists are taken more seriously than female novelists in the wider culture (as voiced by, among others, novelist Jennifer Weiner). These, in addition to what people see in him as bristly arrogance, don’t add up to much in the way of positive vibes.

But no matter what you think of Franzen, keep this couple of facts in mind: A living novelist had not appeared on the cover of TIME in ten years, and none have graced it since. That’s a shame, because having a novelist on what is probably the most significant American magazine cover (It’s TIME or Rolling Stone, right?) still going guarantees a little extra national conversation about fiction and reading, and I’ll take that every time I can get it. In that light, one cover in thirteen years is a real bummer. But novelists weren’t always so scarcely glimpsed on TIME‘s cover. (Feel free to make the Wayne’s World “doodle-loodle-do” noise and accompanying hand motions as you step into the past with me.) 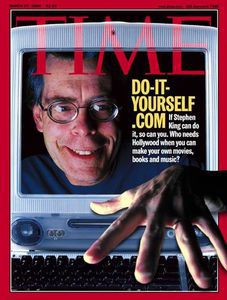 The unintentional comedy level of this cover is through the roof. King’s creepy expression, the old Mac, and the domain name (do-it-yourself.com is available, if you’re interested) are a pretty comical combination, but the headline’s idea of more creative enterprise happening outside the traditional bounds of media is, in a lot of ways, right on target. In any case, King’s evergreen popularity and his frequently interesting takes on writing, reading, and the novel make him a prime choice for the cover. 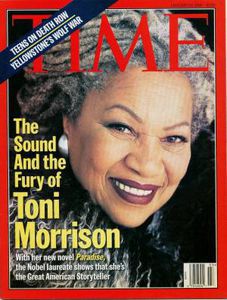 Morrison’s Beloved had just been adapted into a film starring Oprah Winfrey and Danny Glover and the author had won the Nobel Prize for Literature a few years prior, so her visibility was probably at its height. As a book nerd, it’s hard not to get excited to see a living Nobel Laureate in such a conspicuous spot. It’s also hard not to be disappointed that Morrison is only the second female and second black writer of fiction to appear on TIME‘s cover. (Playwright Jean Kerr and Novelist James Baldwin were the others, respectfully.) 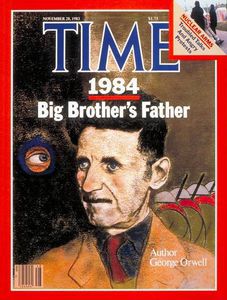 To be honest, I’m a little surprised the Old Boy didn’t make a comeback during the recent NSA scandal. But then again, when your name is synonymous – literally, in this case – with governmental authority run amok, it’s easy to be taken for granted. This cover, which continues a long trend of TIME‘s by illustrating authors rather than featuring a photo, appeared on the brink of the real 1984, which was probably inevitable. If hashtags had been a thing then, I bet #Orwell would’ve broken some kind of record. 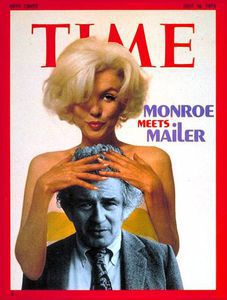 It says something – I’m not sure exactly what, mind you, but something – that what got Norman Mailer on the cover of TIME a full twenty-five years after the publication of his most famous work, The Naked and the Dead, was Marilyn Monroe. In ’73, Mailer published a controversial biography of the Hollywood icon in which he claimed her death was the result of CIA-led assassination. The idea was rubbished by Arthur Miller, Monroe’s ex-husband, but Mailer landed back in the literary spotlight all the same. 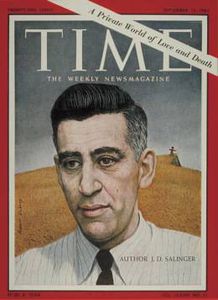 After this cover appeared in 1961, Salinger published one more book (Raise High the Roofbeam, Carpenters and Seymour, an Introduction) before his death in 2010. The image, complete with background reference to Catcher in the Rye, is ominous enough, and the “private world” alluded to in the headline seems to foreshadow Salinger’s imminent seclusion. A lot of the writers on TIME‘s cover appear there as a kind of lifetime achievement award, so it’s interesting to see Salinger there in what I’m sure the country perceived as his artistic prime. 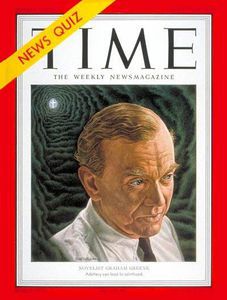 I love the image here, because it’s a perfect representation of Greene’s very Catholic concerns as a novelist – a dark, indecipherable tunnel, leading to a cross. The text under Greene’s portrait reads, “Novelist Graham Greene – Adultery can lead to sainthood.” I’m not sure my reading of The End of the Affair matches up with TIME‘s, but once again, this cover recalls an author still working in his prime, noted because of his fiction, rather than its connection to some other cultural talking point.

These six covers are but a drop in TIME‘s literary bucket. If this brief history looks too white-male-ish to you, I invite you to take a look at the search returns for TIME covers featuring writers. As you peruse them, you’ll no doubt notice how much less frequently novelists show up on the magazine’s cover than in decades past, which is unfortunate, no matter who’s face is plastered across its front.