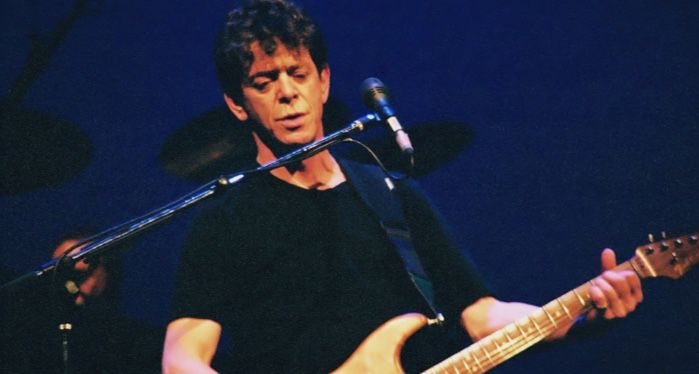 My brother Patrick’s apartment is, at any/every moment, home to 15–20 books on Lou Reed. I like to count them when I visit, wondering if the number has significance in some hidden way like rings in a tree trunk or spots on a ladybug. The real significance you can get without the head count: Lou Reed is his favorite artist. The last time I was in his apartment it boasted 18 Lou Reed books, though just by crossing the threshold I ran up the score to 18 Lou Reed books and one bookseller who idiotsplained IV drug use to Lou Reed in the last year of his life. He did not, as you can imagine, need that explanation, but anyone who hears about what I did immediately demands one. And so, here we are.

I’ve been a children’s bookseller for half my career, most recently at McNally Jackson, where I spent the last eight years. McNally Jackson is known for (among other things like its warm snobbery and excellent staff picks) having a coin lock on the customer bathroom. This solicits a sparkling array of responses from prospective visitors; I’ve been yelled at by men who say they’d rather piss in the street (what’s stopping you, pal?), been handed a $100 bill by someone who needed a quarter in change to open the lock, and heard a lot of gleeful recitations of Holly Golightly’s “Fifty dollars for the powder room” line. The children’s section is next to the customer bathroom, which made me the defacto bathroom attendant. Seventy-five percent of my job was as a bathroom wayfinding device; “Back behind the travel section underneath the stairs and you need a quarter to get in the door” is almost certainly the sentence I’ve said most in my life, leaving previous contenders “shut up” and “leave me alone,” battle cries of any middle child, in the dust.

We kept a pile of quarters on the desk for anyone who didn’t have change on them. Since we got the quarters back out of the lock at the end of the day it was really just a bathroom token recycling program, but one designed to keep humans from then misbehaving when inside. There’s a difference between just pushing a door open and asking an actual human to help locate and then open a door; if you talk to a person about it first, you are less likely to do drugs, have sex, nominate pro-lifers to the supreme or any court, kick puppies, or do anything else that would wreck the day of your human bathroom wayfinding device. I don’t know how this conclusion was reached, but it was taken as gospel at McNally Jackson as though the data came out of a double-blind peer-reviewed study in the ComicCon bathrooms.

The note inside the bathroom explaining why the lock was installed is one of the world’s great epistolary achievements in that it is written so perfectly in the voice of the store’s owner, Sarah, that when you look at it you hear her speak but don’t see any words. “We were having a terrible time with IV needles in this bathroom. You cannot imagine, truly you cannot, what needles do to plumbing,” explained Sarah’s voice to everyone who paid the toll and opened the door. All of this was somewhat moot as the bathroom was completely out of commission at least 70% of the time we were open to shoppers. I spent so much time in there with a plunger that now I’ll occasionally come walking out of the bathroom at a bar or a friend’s place announcing loudly to no one that I could tell from the sound of the water in the pipes that they were six flushes max away from complete disaster.

The customer bathroom was perfectly functional on the day Lou Reed came, and the rest of the staff was on our best behavior as well. We had gotten a phone call that morning telling us the man himself would be attending that evening’s author event. We reserved a seat for him and then spent the rest of our shifts freaking out about the impending Lou Reed of it all. He came early in a small group of three or four and was an absolute angel to everyone he talked to. I snuck off to the back office to text Patrick. “He’s smaller than I thought he’d be.” Well, he’s 70, Patrick replied. Besides that, I think watching Patrick’s devotion and admiration grow over the course of our lives I had turned him into a giant. Eighteen books in a small apartment. That counts as big.

Lou Reed was putting his jacket down when a customer, a regular human with no biographies in my brother’s apartment, came up to ask me how the bathroom works. “Take this quarter, it’ll make sense when you get there,” I said, gesturing. She was at the door before I realized Lou was slowly walking towards me. “Can I have a quarter?” he asked gently. “Not for now, but I might need to use it later. And why do you need quarters to use the bathroom?”

The conversation got away from me in a hurry but the devastating part of that was that I could see every word as it was to come down the pike but wasn’t able to stop myself. This hurricane was making landfall—I couldn’t redirect it, I just had to call FEMA and declare a state of emergency.

“There’s a sign inside the bathroom that tells you why we use quarters,” I told him. He, very reasonably, immediately asked what the sign said.

“The note,” I said, slowly, “it says that we were having a horrible time with people flushing IV needles down the toilet. The needles are really, really bad on the plumbing.”

“You don’t need to tell me,” Lou Reed returned, not unkindly. He smiled and sat back down in his seat. I wanted to rush over and tap him on the shoulder and say but I DID need to tell you. You asked me! I had to do it! Instead I calmly transcribed the interaction, word for word, in a text to my two brothers.

YES THANK YOU PATRICK I AM AWARE OF THAT, I wrote back. In fact, it was one of a very limited set of facts I knew about Lou Reed, which were: Patrick loved him, he had serious drug addiction, and “I Love You Suzanne” undeniably slaps and always will.

“He probably knows more about what those needles do than the guy who holds the patent,” Patrick continued. “So you just explained how speed or heroin works to music’s most notorious aficionado of the stuff.” I put my phone away and punched out of work early before I had the chance to idiotsplain weed to Trey Anastasio.

Lou Reed was gone within the year. Patrick got four new books about him. I kept giving out quarters. “I Love You Suzanne” still, undeniably, slaps.