It’s that time of year again: Game of Thrones finished its season in June, and of all the A Song of Ice And Fire readers are wondering when George R. R. Martin is going to finish his next book so we can all head back to Westeros. Sadly, there’s no Winds of Winter in sight. Not yet, at least.

What’s a fan to do? Read other series, of course. But there’s a problem with that as well: so many other great fantasy series are also unfinished. (Case in point: I tried to distract myself from ASOIAF with Patrick Rothfuss’s Kingkiller Chronicles, only to get to the end of the second book and realize that fans have been waiting on book three for years.)

For those of you who — like me — need closure from the next series you read, here are five completed series that will take your mind off Westeros. They aren’t all fantasy, but if you like A Song of Ice and Fire, at least one of these should appeal to you.

The First Law series by Joe Abercrombie
Genre: Fantasy
How many books? Three, plus three standalone novels
Read it because: You loved Tyrion Lannister, The Hound and other noble jerks

If you love Tyrion Lannister, you will, well, you won’t exactly like Superior Glokta —he’s a torturer, after all — but you will root for him. Abercrombie’s epic trilogy and his three related standalone novels are filled with the sort of imperfect, roguish characters that you find in Westeros and Essos. He turns fantasy clichés on their heads, and makes you cheer for some awful human beings. In the hands of a lesser author, this wouldn’t work, but Abercrombie has a sense of humor as wicked as the characters he writes. I’d tell you what the series is about, but I’m not sure how to do that without spoiling it for you. Let’s just say that a wizard returns to a kingdom centuries after he built it, a young man goes on a quest, and a barbarian warrior leaves his homeland in search of redemption. Everyone is kind of horrible, but it’s still a lot of fun, and surprisingly feminist. 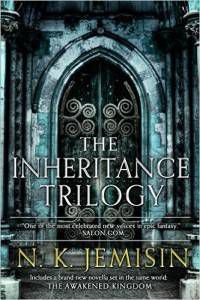 The Inheritance Trilogy by N.K. Jemisin
Genre: Fantasy
How many books? Three, plus a novella in the same world
Read it because: You’re intrigued by the Others, The Children of the Forest, R’hllor and Westeros’s weird weather patterns

Fascinated by Westeros’s mythology? Lie awake nights, trying to figure out what the heck is up with The Lord of Light? You will love the complicated mythology and magic of the Inheritence books. The first book, The Hundred Thousand Kingdoms, focuses on Yeine, the granddaughter of the world’s most powerful man, who becomes a pawn in a struggle between her own family and the gods. Gods in this world exist alongside mortals, and Yeine’s family keeps four of the most powerful gods as pets. I was fascinated by the gods in Inheritence. The creation myths of Jemisin’s world are family history for them, and those first events influence everything that happens in all three books, whether the mortals in the story know it or not.

Acacia by David Anthony Durham
Genre: Fantasy
How many books? Three
Read it because: You liked Ned Stark, you sympathize with Lady Sansa, you love the sweeping descriptions of the families, politics and religions of Westeros, you like the Dothraki.

Remember good old Ned Stark, one of the best dads in Westeros? Remember how honorable he was and how his kids adored him? Yeah. You should read about King Leodan Akaran and his family. Acacia is a good, old-fashioned high fantasy epic, told from several points of view, in a world as complex as our own. Leodan is a good king and a good dad, but he happens to be the latest in a line of kings who have subjugated several other peoples for centuries, and who’ve made a deal with an Other-like threat beyond the kingdom’s borders. Acacia tells the story of Leodan’s family, of his subjects and of the warriors who seek to displace him. Durham’s world is a brutal, politically-complicated, morally-ambiguous world; if you like Westeros and Essos, I think you’ll appreciate it. 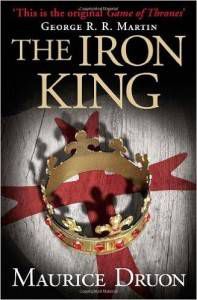 Accursed Kings by Maurice Druon
Genre: Historical fiction
How many books? Seven
Read it because: You like the succession games and political intrigue in King’s Landing

This is the historical fiction that partially inspired the cutthroat political intrigue in A Song of Ice and Fire. How do I know? George R.R. Martin tells us so in the introduction to the newest editions! He read these books, written by French author Druon, as a young man. The first book, The Iron King, tells the story of King Philip the Fair, who destroys the Knights Templar, and his scandalous family. These books were written in the ‘50s, so they are dated, but if you’re a fan of the cloak-and-dagger political intrigue, and succession games in ASOIAF, you’ll enjoy Druon’s stories about the royal families of medieval Europe.

Bonus read: All of William Shakespeare’s War of the Roses plays. You’ll recognize very different versions of Cersei and Tyrion in Queen Elizabeth and Richard III. 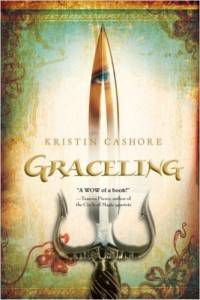 Graceling by Kristen Cashore
Genre: YA
How many books? Three
Read it because: You loved Arya Stark

If you cheered every time Arya crossed someone off her list, you will like Katsa in Graceling. Like Arya, Katsa is a lady. Like Arya, Katsa hates dresses and needlework and the idea of marriage. Like Arya, Katsa is an extremely gifted fighter and assassin. Katsa is a Graceling, one of a group of people born with a special talent (or Grace). Her Grace is killing people. The difference between Katsa and Arya is this: Katsa doesn’t like killing people and fights her nature, while Arya is driven to kill. Katsa seems an awful lot like another female YA protagonist whose name begins with “Kat” as well, so if you’re a Hunger Games fan as well as an ASOIAF fan, Graceling is a must-read for you.

What are your favorite finished fantasy series? Have any recommendations? I think it will be a while before we can all get back to Westeros.