Self-Help Memoir, Stunt Memoir, or just immersion journalism via a challenging idea: authors of non-fiction lately have taken to the idea of creating a personal goal and then documenting all the things they learn on the way to achieving it. Whether it be a weird goal, like living according to a stringent biblical set of rules, or a personal challenge, like getting rid of debt, these authors create a space for us to dream, as readers, of reaching our own goals, be they serious or silly.

Book Riot author Steph Auteri points out in her article that books that show us the benefits of getting proactive about life don’t always translate into actual change in the reader’s life. What I’ve noticed is that I get a ton of pleasure from someone else’s successful deep dive into life because I don’t usually feel I have the luxury: sure, I love good food and good wine, but will I quit my job to get into the world of fancy restaurants and wine lore? Not right now. Reading these narratives of challenge inspires me to stick it out when I’m working on something difficult rather than always skimming the surface and quickly moving on.

I don’t know enough about any of my personal challenges to write a whole book about them, but these people definitely do, and I’d love for you to read a few of my favorites and share your own in the comments! 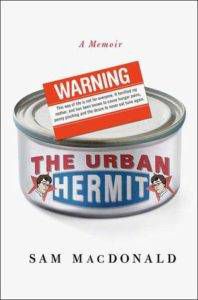 The Urban Hermit by Sam McDonald

This was my first foray into this genre of memoir/self-help/stunt books, and it stuck with me because it revolved around a very simple but very difficult to sustain change: Sam began eating lentils for every meal, both because they were nutritionally strong, because they took little time to prepare, and they were very inexpensive. The book chronicles a non-perfect but deeply impactful change that this wrought on his body, his career, and his outlook, which I found inspiring even as he didn’t make it out to be earthshattering. I was hooked.

One of my most recent reads, Bianca Bosker chronicles her journey into the exacting world of wine, as she trained, studied, and drank on her way to a certification as a Sommelier. This book did all the interesting things that deepen my love for the genre: sure, she told us about her own experiences, her gaffes and foibles along the way, but I also genuinely learned things about wine as she went; while not exhaustive, this book combined the self-help memoir with actual history, ideas about wine, ways to taste it, and a broader goal than just the sommelier rating: the goal to live for tastes, to seek adventurous sense experiences. 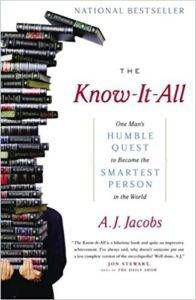 The Know-it-All by A.J. Jacobs (and other books)

Jacobs has done the change-your-life-and-write-about it schtick so many times that he actually wrote The Guinea Pig Diaries about the fact that he’d been doing these experiments (super meta!) – I have only read The Know-it-All so far,and I find him both easy to relate to and funny. His quest to read the Encyclopedia Brittanica from A to Z ended up doing a bigger-picture meditation just like Bosker’s book, wherein he discussed the difference between fact knowledge and actual wisdom and discernment. For any kid who ever fancied themselves a secret genius, this will ring both true and humbling. 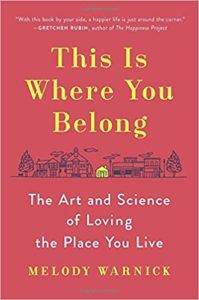 This is Where You Belong by Melody Warnick

Warnick’s book is a series of concrete steps she took toward an abstract goal: that of loving the place she had to live for a time, rather than living in the best place she could find and automatically loving it. Her quests are often deeply mundane, but she speaks to people who have taken much more extreme measures to love their imperfect towns and cities, and in so doing crafts a book that gets at belonging and the process of becoming part of a place better than almost any other book on the topic. I appreciated it because I was reading it just as I exited the honeymoon phase of a new place, as I was starting to realize that making friends and being a part of a place is hard work. It didn’t change my life, but this book made me see that there is something to be gained by actively, not passively, growing toward belonging somewhere. 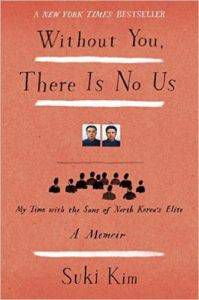 I include Kim’s book even though I’m currently in the process of reading it because I find the premise so interesting and because all the other examples I give were specifically linked to a positive (or at least neutral) change in the author’s life. Kim moved to North Korea as an English teacher, partially out of fascination with the nation and partially out of her family heritage which was tied in a few ways to North Korea (she herself is Korean-American, having lived her first 13 years in South Korea). Hers is an example of how the change-your-life narrative doesn’t have to be about self-help; it can also be about understanding and exploring the world with both the positives and negatives that are revealed because of that change.

By exploring these five books, and many others where the authors changed their lives, you might get closer to understanding what makes immersion journalism work, but you also might discover process secrets for changing your own life in a way that would make a good story – and if you don’t, it’s still pretty fun to dream about.