In case you missed it, on Monday 14 October, the Booker Prize for 2019 was awarded to both Bernardine Evaristo for her novel Girl, Woman, Other and Margaret Atwood for The Testaments, the sequel to The Handmaid’s Tale. Both women are phenomenal writers, each deserving of this great accolade. However, this result has left a bad taste in my mouth and a lot of the wider reading community, so let me expound on why.

The judges broke the rules.

Launched in 1969, the Booker Prize has been the leading literary award for books written in the English language for over 50 years. In that time there have been only two other occasions in which the award has been shared. The first time, Nadine Gordimer and Stanley Middleton shared the prize in 1974. The second time, Michael Ondaatje and Barry Unsworth were joint winners in 1992. However, following this second failure to make a decision, the committee officially changed the rules in 1993 to ensure that it could never be shared again.

The judges claim the decision was unanimous and that both books were just too phenomenal and provoking in their own rights to be out of the running. They consciously chose to ‘flout’ the rules, which I might have been on board with under different circumstances, but I don’t think this was the year or these were the books to flout the rules for.

Bernardine Evaristo is the first black woman ever to win the prize.

Of the 300 books that have been shortlisted over the 50+ years of this prize, only four black women have ever made the shortlist. Bernardine’s win is monumental for this alone, and also because in her 40 years of writing she has been a very vocal advocate for the diversification of voices in literature. In 2006, she initiated a report into publishing that showed that less than 1% of the poems published in the UK are by non-white writers. Not satisfied with just highlighting the discrepancy, she went on to launch The Complete Works Poetry mentoring scheme to help black and Asian poets in the UK get published. She is also the founder of the Brunel International African Poetry Prize and the founder of Britain’s first theatre company for black women, Theatre of Black Women.

However, this prize is not awarded to an author for their advocacy or body of work but for the specific novel submitted for the publishing year. Girl, Woman, Other is a novel made up of the stories of 12 women, most of whom are black British women, and explores their experiences as they confront issues of racism, class, gender, and sexuality. It is experimental in form and content and challenges and provokes the reader on issues relevant today. It’s not enough to just award the prize to a black woman for the sake of diversity, but when there is a book as beautifully written and deserving of the Booker prize as this one is, then it is a travesty to not award it the prize. Or to award it a shared prize with a work of lesser literary merit.

Of the six books that made the shortlist, there were some that I loved and some that I hated. But there was only one who’s qualification into the shortlist boggled me, and that was The Testaments. I am a huge fan of The Handmaid’s Tale and I was among those preordering the books and (I’m ashamed to say) one who benefitted from Amazon’s embargo breach. The Testaments was everything I needed it to be and I was very satisfied overall. 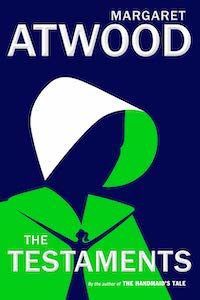 However, was it as experimental and stimulating as The Handmaid’s Tale? No. I believe The Testaments was a gift to the fans. It allowed us to step back into Gilead, have our questions answered, and reach a satisfactory conclusion. In my opinion, it didn’t bring anything new to either The Handmaid’s Tale or the literary world at large. It read more like commercial fiction and sometimes even like YA fiction. None of this is meant to be taken critically, I loved the book. However, that doesn’t mean it was a book for the Booker Prize.

The other books on the shortlist were challenging in terms of form and content and took more literary risks. Had Girl, Woman, Other shared the prize with any of the others, then I would have still been mad but more understanding. At least she would have been sharing it with a book worthy of the prize.

Atwood didn’t win the prize for The Handmaid’s Tale back in 1986 and maybe the prize committee has been lamenting that ever since. However, I don’t think this year’s win makes up for that.

It’s all about the money.

Last year the judges faced a lot of backlash for awarding the prize to Anna Burns’s Milkman as its stream-of-consciousness style was called difficult and alienating. The Man Group also ended their sponsorship of the prize after 18 years at the beginning of this year, leaving the prize in search of a new sponsor. I think all of this has played a part in the judges choosing the bookies favourite and the bestselling book of the year as their winner.

They may win sponsorship but they’ve lost integrity. Gone are the days when readers would accept this news in isolation and wonder if anyone else was as outraged. The day they announced the winners, Twitter, and Instagram lit up with readers calling the judges out for selling-out. The Guardian called the decision a ‘fudge’. Even those online that had only read The Testaments and none of the other shortlisted books didn’t think it was a winner.

Margaret Atwood is phenomenal, but this was a book she should not have won with. After winning she commented that, ‘it was nice of [the judges] to put me on the shortlist but I certainly did not expect to be winning it in any shape or form.’ The sceptic in me thinks that she was toted for the win right from the inception of the sequel to The Handmaid’s Tale and they were relying on her skill as a writer to make sure it was a good enough book to deserve the win. So when it wasn’t, they conceded and slipped in a more literary book to try and appease the masses.

The judges were out to have their cake and eat it too, but instead they just ended up dropping the whole cake on the floor. It’ll be interesting to see if people continue to be as excited about the prize following this year’s disappointment. Personally, I’m done.