The 2017 World Fantasy Awards were announced last night, and it looks like a great list! Claire North won for best novel with The Sudden Appearance of Hope, along with Kij Johnson (long fiction), G.V. Anderson (short fiction), and Jeffrey Ford (collection), among others. This year’s ceremony was held in San Antonio, TX, and honors the best in fantasy. While maybe not as generally well-known as the Hugos and Nebulas, it holds a similar prestige for SFF folk. 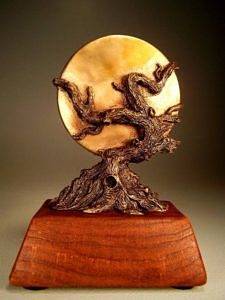 One of the things that marks this year’s ceremony as special is the trophy itself. It’s the first year the H.P. Lovecraft statue has been switched out for the far lovelier (and non-racist) new trophy designed by Vincent Villafranca. The controversy over the Lovecraft trophy began in 2010, when both Nnedi Okorafor and China Miéville objected to it due to Lovecraft’s racism. In 2014, author Daniel José Older led a petition for it to be replaced, though he advocated for an Octavia Butler statue instead, which would’ve been awesome! The following year, the World Fantasy commission announced that the statue would be replaced, and they hired artist Vincent Villafranca to design it. 2017 marks the debut of the new statue.

Yay for protests getting things done!

Of course, also of note are the winners. Oddly, I’ve read almost all the nominees, but none of the winners! I haven’t even heard of short story winner G.V. Anderson, though I love Strange Horizons, which published her winning story, so I can’t wait to read it. And notably, several of the nominees are critiques of the Lovecraftian universe, including long fiction winner The Dream-Quest of Vellitt Boe by Kij Johnson, best novel nominee Lovecraft Country by Matt Ruff, and best long fiction nominee The Ballad of Black Tom by Victor LaValle, among others. Artists gonna subvert, and I’m always gonna be here to read the results when they do.

Here are the winners! What are your favorites?

“Seasons of Glass and Iron”, Amal El-Mohtar (The Starlit Wood)

“The Fall Shall Further the Flight in Me”, Rachael K. Jones (Clockwork Phoenix 5)

On the Eyeball Floor and Other Stories, Tina Connolly (Fairwood)

The Paper Menagerie and Other Stories, Ken Liu (Saga; Head of Zeus)

Kelly Link, for contributions to the genre

Joe Monti, for contributions to the genre

Neile Graham, for fostering excellence in the genre through her role as Workshop Director, Clarion West (winner)