When Marvel announced back in April it would be pairing up with Freeform to create New Warriors, a live-action comedy featuring Squirrel Girl, I literally squee’d. I had recently read Ryan North and Erica Henderson’s The Unbeatable Squirrel Girl: Squirrel Power for the first time, and my mind was pretty much blown.

Three months later, casting has been announced for Squirrel Girl herself, and while any news about this project makes me thrilled about the fact that we are this. much. closer to seeing my personal hero on the small screen, my reaction this time was closer to:

So what’s the good word? It turns out Marvel has tapped Milana Vayntrub for Squirrel Girl, who is probably best known for her work as “AT&T Girl.” Here. Let me show you:

AT&T’s Lily is undoubtedly likable. She’s friendly and approachable and totally seems like the type of person who wouldn’t make fun of you if you forgot to shave your legs before going out in shorts, failed to stop your daughter from eating cat food, or spilled your chocolate martini all over yourself during a toast with fancy people (all things I have done).

Vayntrub herself (the real person) also happens to be an activist, who uses her platform to advocate for Syrian refugees. A former refugee herself, whose family fled the Soviet Union in the late 1980s due to animosity toward the Jewish population, she started #CantDoNothing last year in order to make it easier for people to donate their time, money, and voices to the cause. I can’t help doing a fist pump (I’m from Jersey) when I see someone who’s struggled so much, and done so much good, land a role as awesome as Squirrel Girl.

At the same time, I can’t help but notice that Vayntrub lacks something that seems essential to Squirrel Girl… 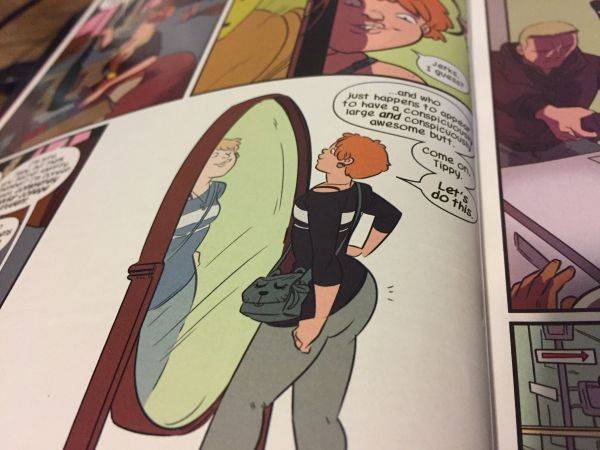 Which brings me to why I adore Squirrel Girl so much.

I’ve written before about how I came to the comics party late in life, mostly because the average superhero fare didn’t appeal to me, and I didn’t think the comics world had anything else to offer me. When I eventually started reading comics late last year, I was drawn to series like Lumberjanes and Giant Days and, most recently, Misfit City, which tended to feature close friendships among kick-ass ladies. When I read the first volume of Squirrel Girl this past April, I was blindsided. She was like no superhero I’d ever seen before.

Part of it is the comic sensibility of the series itself. I mean: 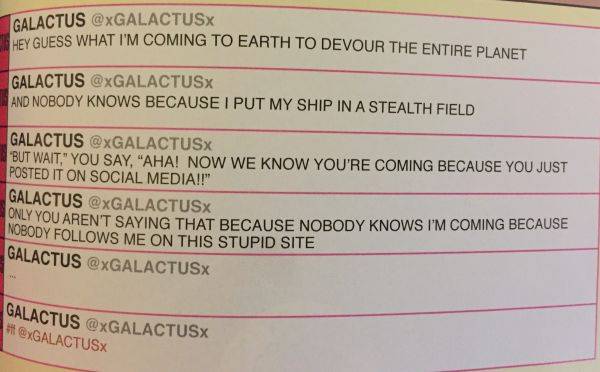 And that positivity includes body positivity. Squirrel Girl doesn’t look like any other female superhero I’ve seen. Where many other female superheroes look like supermodels or Barbie dolls or department store mannequins come to life, Squirrel Girl just looks like… a real girl. With bodacious curves and a “conspicuously awesome butt.” And she owns it.

Which means a lot to someone who’s had a complicated relationship with her body for most of her life. Because I come from a background in which my mom casually mentions how thunder thighs run in the family. Because wearing a maxi dress sometimes makes me feel as if I’m cosplaying as a circus tent. Because the lady at the dry cleaner has asked when I’m due and, when I’ve assured her I’m not pregnant, she’s asked, Are you sure? Because I’ve totally been the woman reduced to tears in the fitting room because none of the shops at the mall carry jeans for average-sized women.

Squirrel Girl has the unquestioning self-love I wish I could have. She’s the me I sometimes am on a good day, when I’m rocking my favorite outfit, or when I’m doing the most awesome crescent lunge in yoga class, or when I’m performing average, everyday feats of strength that remind me of everything my body is capable of.

Sometimes, some days, I can love my body. Squirrel Girl seems to effortlessly love every bit of herself every damn day.

And for me, that’s an important part of who Squirrel Girl is.

It’s been gratifying to see an increasing number of curvy female protagonists in the stuff I read, from Willowdean Dickson of Julie Murphy’s Dumplin’ to the women and girls who appear in the comics I mentioned above. In these latter works, the characters’ body types are an afterthought. Their size does not not relegate them to the role of humorous sidekick or sassy best friend or larger-than-life comic relief.

If only their live-action versions could fare as well.

Still, even though Vayntrub doesn’t seem to have any conspicuous junk in the trunk, I eagerly await the eventual release of New Warriors. When it becomes available, I will totally be all…

…as I sprint to the nearest screen.

Because Squirrel Girl eats nuts and kicks butts, and no one can take that away from me.