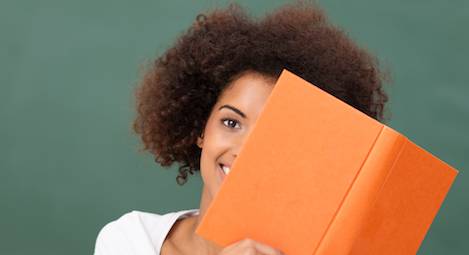 This is a guest post from Tiffani C. Willis.

In 2012 I started a blog called Passport Books where I could ramble, rave, and rant about books as much as I wanted (family and friends could only take so much book talk). My blog is named Passport Books because books and reading have been always been a way for me to travel to different worlds and lands, both real and imagined. When I’m not reading or writing about reading, I’m traveling or enjoying a glass of wine, sometimes also while reading. Follow on Twitter @PassportBooks.

When my 11th grade English teacher announced that we would be reading books about or centered around war to correspond with our 11th grade history class where we were studying various wars that the United States had been involved in (the Spanish-American War, World War I, World War II, and the Vietnam War), I was not particularly happy. Wars weren’t really something I was into. Nor was I excited at the prospect of reading a critique of American democracy by a Frenchman or about the trials and tribulations of whale hunting, these last two to be read over the summer. I have always loved reading but none of this sounded fun or interesting.

As a student I greeted prescribed reading and summer reading lists with a mixture of excitement and dread. On the one hand, reading lists inevitably provided a list of titles that were not new but were new to me. Plus, I love lists and crossing things off.

On the other hand, I wanted to read what I wanted to read. This was especially true during the summer, which more than any other time of the year, was for what I called “free reading,” as in free to read whatever I wanted at the pace I wanted. But being the rule follower/good student that I was, I grudgingly read Catch-22, Democracy in America, Moby-Dick, and host of other books that made their way onto my class syllabi and summer reading lists. Thank goodness I did.

There is much to be said for letting kids pick what they want to read. They are more likely to finish a book if they got to choose what to read. Giving kids choices, particularly kids who otherwise wouldn’t choose to read, tends to make reading seem less like homework and more like something that could be enjoyable. As a librarian and aunt to many young readers I try to encourage their reading by helping them find books that match their interests.

The son of a friend told me that he wanted to travel around the world with his mom, so I gave him a kid’s atlas from National Geographic. One of my nieces loves animals, not just cats and dogs but polar bears and frogs, so I searched the shelves at my local bookstore for fiction and nonfiction stories about or involving animals. One of my middle grade aged nephews, who is somewhat of a reluctant reader, loves football so together we found a series of books that featured kids playing sports.

That being said, I also encourage them to read books they claim to not be interested in because although I respect other people’s choices and preferences whether they are kids, young adults, or actual adults, I also think a person doesn’t fully know what they are interested in until they have been exposed to it. It is easy to have a gut reaction to a thing without actually knowing much about the thing, like my reactions to books about wars and whales. Sometimes those gut reactions are spot on, sometimes not.

Catch-22 ended up being one of my favorite books of all time, so much so that I have reread it several times since high school. Moby-Dick was amazing in a way I would have not thought possible. (Yes, I really do like Moby-Dick.) This isn’t to say I loved or liked every book I was forced to read in elementary, middle, or high school. Try as I might, I simply cannot stand Wuthering Heights. I didn’t not like Democracy in America, but I have no intention of ever reading it again. Still, I am grateful for being exposed to books I did not think I would like. I am also grateful for being exposed to things I didn’t like because it helped me figure out what I didn’t like and why.

And so I keep buying my nephews and nieces “boring” books because I know that once they actually sit down and read them they will find that some of those books are not so boing after all. At least, that’s what happened to me. Or maybe not, maybe my nephews and nieces will think a book I gave them is terrible and then they can tell me why they did not like a particular book. Either way is fine with me because I got them to read a book and talk about it.